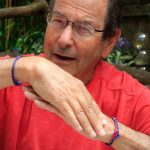 Drew Kampion: The Man Behind Drewslist

Start the day with a cup of coffee and drewslist, and it could turn out much different than you expected. You might find an event or class you want to attend, snag a replacement for a lawnmower that just died, score a deal on a used car, get a new job, or find your lost cat.

Drew Kampion launched the eponymous service in 2009 with a little more than 150 names. Today, drewslist is delivered via email six days a week to more than 6,750 subscribers and has knitted together a uniquely tailored community. It’s the resource that realtors recommend their clients subscribe to as soon as they move to South Whidbey.

Drew Kampion with some of the books he’s written. (Photo by David Welton)

Those who sell items are asked to donate five or ten percent of the amount they receive, but it’s an honor system, and some folks are “honorably dishonorable,” says Kampion. Even though some don’t pay their way, Kampion’s perspective remains upbeat, as noted at the end of each of his messages: “Life is a wave. Your attitude is your surfboard. Stay stoked & aim for the light!”

A former editor of surfing, windsurfing, and New Age magazines, author of eight books (with more in the works), and former publisher and founder of the Island Independent newspaper, Kampion has worked in journalism and publishing for nearly 50 years. These days, he works six days a week in partnership with his son Alex, who lives in Finland.

Drew Kampion in 1968 as editor of Surfer Magazine. (Photo courtesy of Drew Kampion)

“I use global technology to synergize a micro-community,” Kampion says in an interview on the island’s local economy produced by Thriving Communities.

“There are very few people on this island that compare to Drew,” says Jerry Millhon, co-creator of Thriving Communities. “His unique perspective is sublimely integrated within drewslist. The man is still surfing, still looking for the big one to ride, and taking us with him. He is a bright light of connectivity on Whidbey Island.”

Surfing shaped Kampion’s life from the time he was a teen. While he doesn’t surf as much as he would like to these days, he joined in a memorial paddle in Santa Cruz on July 8 for legendary surfer Jack O’Neill, who died at the age of 94 last month. Kampion’s 2011 book “Jack O’Neill: It’s Always Summer on the Inside,” documents the life of one of the world’s most renowned surfers, one credited with creating the wetsuit and expanding surfing internationally.

Kampion at Cotton’s Point circa 1968. (Photo courtesy of Drew Kampion)

Another significant voice in the surfing world was publisher John Severson, a friend and mentor of Kampion’s, who founded Surfer Magazine in 1960. Kampion started as an associate editor in 1968 and was promoted to editor after three weeks. Severson’s home in San Clemente was next door to some fine surfing at Cotton’s Point, Kampion recalls. Unfortunately, the sweet days of catching waves were complicated when Richard Nixon moved in next door with his security posse.

Kampion was born in 1944 and grew up in Buffalo, New York, far from the surfing scene. His dad found work with Lockheed and moved to California, where the family lived in Burbank for a while. Kampion was “anti-surfer” until he started dating a girl who liked the sport, which led to his buying his own Dave Sweet surfboard (Sweet is credited with pioneering polyurethane surfboards, which helped revolutionize the sport and culture in the late 1950s).

“I rode my first wave in Malibu in ’62,” Kampion recalls, saying the guy who sold him the surfboard taught him to how to look at the ocean and its waves, its rhythm, and its sets. “It was an honor to get pushed off the board by surfing gods like Miki Dora.”

Kampion’s work in surf publishing took him on beats covering surfing championships in Australia and Hawaii. He married in 1978, and he and his wife Susan had two children, Alex and Alana, who began their education in Waldorf schools in Southern California. In the early nineties, he and his family moved to Whidbey and became involved in the Whidbey Island Waldorf School community.

Kampion interviewing Robby Naish, the greatest windsurfer of all time, circa 1985 (Photo courtesy of Drew Kampion)

While riding the Ferris wheel at the county fair that first summer of ‘91, Kampion viewed Camano Island and learned it was the other significant part of Island County. He was struck with the notion of creating a newspaper that connected local island communities. The fortnightly Island Independent was born and served Whatcom, Skagit, and Island counties, Anacortes, the San Juans, and Port Townsend. One of the paper’s regular contributors was Jim Freeman, who is known as “the conductor of fun,” and an emcee of poetry slams.

Freeman said it was Don Zontine, one of the early founders of the Whidbey Island Waldorf School, who networked the cast and crew of the Island Independent together when it began. “Don knew all the locals,” Freeman says. “Drew, Chris Crotty, G. Armour Van Horn, Chris Adams, Lorinda Kay, and I were in there.”

The Island Independent was first published on April Fools’ Day in 1993 and ended its run on the last day of March in 1996 – three years to the second. “Computers were younger then, and there were issues,” says Kampion. “Our intrepid ad man and business manager, Chris Adams, suffered a series of hard-drive wipeouts that simply took the wind out of our sales. We were doing well, otherwise, until an attempt to go from a free to a $1-a-month publication failed. A buck, it seems, was just too high a price to pay.”

The creation of the Island Independent was inspired by a ride on the Ferris wheel at the county fair. (Photo by David Welton)

Elliott Menashe, who promotes working with nature by saving old-growth forests and using natural shoreline buffers, says, “He teaches by example. He inspires. Drew has a far-reaching feeling for phenomena and a childlike sense of wonderment. His curiosity is boundless. Drew is without pretension or artifice and has an utterly unique ‘elationship’ with the universe. He actually likes people.”

One of the criticisms of drewslist is that it’s overwhelming: Up to thirteen email messages could land in your inbox around 4 a.m. each morning, with subjects such as “For sale, wanted, and free,” “Art, artists, and galleries,” and “Boats, kayaks, and other hulls.”

To the often-voiced refrain that there are more categories than an individual may want to read, Kampion says, “I run all the listings because there is a synergizing effect of the email. I don’t want to lose the (community’s) incentive to participate. People will see what they want to see.” Kampion adds that a long-neglected web page exists and invites a volunteer webmaster to step in and update it.

Drewslist is a ‘reboot’ of the Island Independent, Kampion says. “As the website develops further, it will allow us to truncate the daily emails, which should be far less irritating to fraught islanders.” Ever since the paper folded, he has looked for ways to revive its spirit, and drewslist is the closest he’s come to replicating it.

“All I know is that Drew has been in the forefront of creating community on Whidbey for years,” says Kampion’s long-time friend and hometown hero Nancy Waddell. “I still have my “Island Independent” t-shirt and loved the paper; now drewslist brings us together in so many different ways. It’s the go-to place to find almost anything here! He had an idea and brought it to life.”

Christine Tasseff, owner of Roots Landscaping, says, “It has been my great fortune to have Drew as a central player in my human family. He is brother, father, and friend, and fills each of these with infinite generosity of spirit. Drew is a weaver, binding threads of heart and culture and humanity in all he does. He works to connect us, unite us, and always to wake us up!”

To subscribe to drewslist, email drewslist@whidbey.com and ask to be added. To learn more about Kampion and his world, visit his website.

Drew signs off each email message with “Life is a wave. Your attitude is your surfboard. Stay stoked & aim for the light.” (Photo by David Welton)

Kate Poss worked as a library assistant at the Langley and Coupeville libraries before retiring last year. She worked for three summers as a chef aboard a small Alaskan tour boat from 2008 to 2010. Poss was a newspaper reporter in Los Angeles for many years before moving to Whidbey, Island where she likes cooking for new and old friends, hiking, reading great fiction, and writing her second novel with friend Fred Bixby.