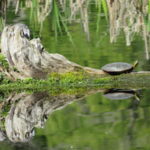 Drinking in the View

On the island, water can seem mesmerizingly ubiquitous. We drink in the view from every possible angle. But drinking in the aqueous view can deceive us. Despite the water that stretches to the horizon in every direction, we actually have a limited supply of fresh drinking water, and that supply is intimately related to our habits—from where we build our homes to how our excretes percolate through the soil and reenter the groundwater. Because residents like to inch up to the Island’s shores to get the best view, and because seas are rising due to climate change, our aquifers are increasingly threatened by saltwater intrusion.

Sunrise over the Saratoga Passage (photo by Susan Scott)

What is the source of our drinking water?

The lead-tainted, public water crisis in Flint, Michigan has made drinking water a pervasive concern—even here on Whidbey Island. Increasingly, citizens want to know where their drinking water comes from.

On the north end of Whidbey Island, water is piped over from the Skagit River to serve residents of Oak Harbor and Naval-Air Station Whidbey Island. Potable water for residents of the north end is vulnerable to aging infrastructure (and a lack of monies for its replacement) as well as cataclysmic events, like “the Big One,” which could suddenly disrupt the supply. Deception Pass Bridge will, in fact, be closed for a stretch in the fall in order to service the water pipes attached to the bridge’s underbelly.

Islanders of South and Central Whidbey—whether residents of a village, like Langley, or individuals drawing from one of the 6,000 private wells—share a common, naturally occurring reservoir. While hydrologists speak of multiple aquifers, in fact these aquifers fit together like cells in a contact lens floating on a bed of seawater. Critically, this is “a sole source” aquifer. That means our drinking (“potable”) water supply is replenished (“recharged”) by a single source—namely, rain, assuming its ability to percolate through the soils before running back to the shorelines. In other words, Central and South islanders have no access to fresh water apart from this combined, multi-cellular aquifer. This natural reservoir—limited in terms of what can be pumped out before seawater rushes in, and vulnerable to the demands that each of us bring to it—is what makes Whidbey Island habitable.

Rain is the “sole source” for replenishing aquifers on Whidbey. (Photo by Susan Scott)

Is our drinking water supply vulnerable?

Ninety percent of the wells on the southern end of the island are sunk in the sea level aquifer. As we enter the age of climate change, this places the potable water supplies of Island County—especially given our many miles of shorelines—at risk. Island County is one of two coastal communities of Western Washington considered particularly vulnerable to sea-level rise and has been included in a federally-funded coastal resilience project backed by the National Oceanic and Atmospheric Administration.

Even apart from climate change, monitoring the balance between freshwater recharge and water usage is, on the island, the first order of business. On Whidbey, domestic use constitutes the major freshwater draw, and up to 50 percent of that draw may be for landscape use. If the pressure in an aquifer is lowered by pumping more water for surface use than percolates back into the aquifer, the aquifer may, because of the vacuum created, infill with seawater.

Illustration of a well relative to Sea Level (from website: https://althealai.wordpress.com/2015/10/25/groundwater/ )

That our drinking water has but one source of replenishment already hints at a second vulnerability: the rains must find their way back through the soils before running off into the Sound. Human interruption of this slow drip-drop of rains through the diversity of soils—the construction of hard surfaces like roadways, the removal of trees that hold back water, the in-filling of wetlands that serve as a natural filtration system—impedes the recharge of the aquifer. While Island County is served by the Water Resources Advisory Committee (WRAC), a panel of 12 citizens from across the county, the intersection of the dynamics of water with property rights is a thorny nexus for us as citizens and thus for the County.

Wetlands as critical filters for water seeping back into the aquifer. (Photo by Jamie Whitaker)

Another aspect of the water cycle is the management of human waste. Seventy-two percent of Whidbey Island residents utilize septic systems for waste disposal. These on-site systems depend on soil filtration to purify water. All such systems allow nitrates into groundwater. (A buildup of nitrates in the human body adversely affects the ability of blood cells to carry oxygen.) When a septic system remains unmanaged—an undetected crack in a storage tank, an overfull tank—the situation worsens.

While major cities are designing septic systems to deal with the pharmaceuticals we humans move through our bodies, drainage fields cannot modulate excreted drugs, which eventually find their way into Puget Sound and affect marine life. Might we think towards a regional water district that could include more refined management of our effluents?

Citizenship Habits and Your Watershed

Every one of us may, after Flint, admit to a wish to return to innocence. And it’s tempting to believe we live on an island utopia. In fact, if we want to maintain this island as a sanctuary that includes humans, we each need to accept the responsibility to know about our water—its source, its vulnerabilities, and how our habits affect it. John Lovie, one of South Whidbey’s representatives to Island County’s WRAC, urges each of us to:

1. Know the source of your drinking water.

a. If you are part of a public water system, look up your water quality report at the Washington State Department of Health website: https://fortress.wa.gov/doh/eh/portal/odw/si/FindWaterSystem.aspx.
b. If you are on a private well, test your water annually. Testing kits may be picked up at B&W Pumps (behind the Texaco) in Freeland and Island County Health Department in Coupeville. Make sure your annual water quality test includes readings of chloride, total coliform, nitrate, manganese, arsenic and iron.

a. Think about how you use water and what may, even unexpectedly, enter the water because of your use—antimicrobials from hand-sanitizers or soaps, for example.
b. Consider how these substances affect our drinking water supply and, eventually, our marine life.
c. Xeriscaping your yard could help reduce drawdown on our aquifer.
d. Check the infrastructure of your septic tanks and the integrity of your drainfields. Have that septic tank pumped regularly.

In a world reduced to the private and the individual, the care of our water—here on Whidbey as in the state of Washington—draws us back to “the commons.” Our state has retained the legal precedence for treating water as a “common pool resource.” Despite the fact, then, that “my” potable water comes from a “private” well, water remains ours—not mine.

The state holds water in trust on our behalf; that fact implies that we the people can be trusted to operate as members of the commons. It requires us to converse with those with whom we might not agree. It requires us to think beyond “my rights” about a resource that grants life to all. As Lovie sees it, “Water is a proverbial dry run for the type of negotiations we as citizens have ahead of us, given the fact that our geography, with our climate, is changing.”

Island County Commissioner Helen Price Johnson (far left) speaks with attendees at “Whose in Charge of Your Drinking Water?,” a conversation hosted by Thriving Communities at the Whidbey Institute on March 16, 2016. (Photo by Jerry C. Milhon)

Thriving Communities initiative of the Whidbey Institute, Clinton, initiated a public conversation about Whidbey Island’s drinking water and the realignment of our civic sensibilities on March 16, 2016.  A second event—once again open to all—will be held in mid- to late May. For notice of this upcoming meeting, visit the Thriving Communities website at http://thrivingcommunities.org/.

Thanks to John Lovie for his assistance in preparing this article.