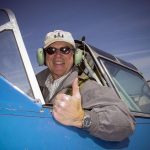 There are lots of nonprofits competing for donations on Whidbey Island, but only Friends of Friends raises funds by crowning someone “Mr. South Whidbey.” At the annual pageant, fashion and talent might be entertaining, but it’s the man who raises the most money for Friends of Friends who wins.

The organization supports South Whidbey residents who have medically-related expenses they can’t afford to pay. This year, retired cardiologist David Welton is in the running. Welton has lived on Whidbey for 12 years, and you may know him as the talented and prolific photographer who has taken many photos for Whidbey Life Magazine.

Welton serves his community by taking photos and donating them to organizations such as the Whidbey Island Garden Tour, Clinton and Langley chambers of commerce, the South Whidbey Parks and Aquatics Foundation, Whidbey Island Nourishes, Hearts and Hammers, Goosefoot, and others. Organizations use the photos for promotion on their websites and in printed publications.

David Welton has stars in his eyes when he thinks about running for Mr. South Whidbey. (Photo by David Welton)

“Photography is the way I’ve chosen to give back,” Welton says. “I was pleased to be asked to run for Mr. South Whidbey and look forward to my continued involvement with the community for as long as I’m able.”

There are four ways to donate to Friends of Friends and cast votes for David Welton. Every dollar donated brings Welton one step closer to being crowned Mr. South Whidbey:

Welton is running along with Brook Willeford, Victor Ramos, Rod Stewart, Daniel Goldsmith, and Anthony Molinero. Regardless of whom you “vote” for with your dollars, you can take pleasure in knowing that your donation will help a neighbor in need pay for medical costs.