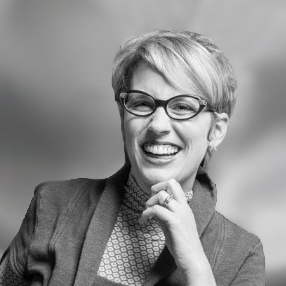 Embracing the Geek Within: Jennifer Stuller Uses her Power for Good

Growing up, my favorite game to play was Power Rangers. I eschewed Barbies, except to cut off all their hair and make them villains in my Power Rangers games. I would climb up into the tree in my backyard, pretending it was the yellow Power Ranger’s sabre tooth tiger vehicle.

When I got a little older, I became fascinated with the character of Rogue in the X-Men cartoon series. I reveled in this universe, where the most powerful woman in the world was a busty, curly redhead who spoke her mind.

As a young woman growing up in in the Midwest, I didn’t consider myself a geek. That was a title I reserved for my male friends who could quote every line from the Star Wars movies and played the card game of Magic the Gathering.

My backstory feeds into why I devoured Jennifer K. Stuller’s presentation this last Saturday, titled “Using Their Powers for Good: Geektivists, Geek Grrls, and Gaymers.” The presentation came to the Langley Library through Humanities Washington.

Stuller is a Feminist pop culture historian, critic and co-founder of GeekGirlCon, an organization dedicated to the recognition, encouragement and support of women in geek and pop culture and STEM (science, technology, engineering and mathematics.)

The stereotypical image most people have of geeks is that of the comic book guy from The Simpsons or a man in a button down white short-sleeve shirt with tape wrapped around the black plastic frames of his glasses. In recent years, geek culture expanded and become mainstream, with popular television shows like “The Big Bang Theory” and “Game of Thrones.” The buying power of geeks is now recognized and respected.

“We’re in a period of peak geek,” Stuller said, quoting Rob Salkowitz, the author of “Comic-Con and the Business of Pop Culture: What the World’s Wildest Trade Show Can Tell Us About the Future of Entertainment.”

The internet provides many avenues of connection for like-minded geeks. What is exciting about this is the potential for positive political change through geeks uniting around a common cause. “Geektivism” has the power to build libraries, combat bullying and empower the voices of those who feel marginalized.

GeekGirlCon, which celebrates the female geek, started with twenty people meeting at a café and talking about how to change the climate of geek conventions like Comic-Con to welcome geeks of all ages and gender identities. The warm, inclusive environment of GeekGirlCon inspires attendees.

“GeekGirlCon is only one aspect of the Geek Girl movement, and organizations, sites, and initiatives like Black Girl Nerds, League of Extraordinary Ladies, The Mary Sue, Womanthology, Legion of Leia, GaymerX, and so on are also fomenting changes to the culture,” Stuller explained. “…the most positive influence is seeing women and girls, en masse, finding a place to be their geeky selves in a way that is celebratory and rooted in community….The positive effect of that radiates out in ways yet to be measured.”

These cultural changes are not without uphill battles. Stuller gave an overview of #GamerGate, a negative campaign driven primarily by male gamers who coordinate cyber attacks on female game designers and cultural critics. Targets of #GamerGate have been the victims of death threats, harassment and attempts to drive them out of the gaming industry.

“If nothing we do matters,

then all that matters

Stuller also cited a scene from Avengers: Age of Ultron, where the female character of Black Widow rides a motorcycle off a jet onto the road below. Toy makers replaced the Black Widow character with Captain America or Iron Man when selling the movie’s motorcycle set, assuming boys wouldn’t want to play with a female action figure. This decision sparked a #WeWantWidow campaign on social media, asking for more merchandise and representation of the character.

Stuller closed her presentation with a clip from The Daily Show. A reporter traveled to Russia last year to cover anti-gay legislation in the country. He interviewed a woman waving a rainbow flag who told him she found inspiration from Joss Whedon’s television series Angel, where the title character says, “If nothing we do matters, then all that matters is what we do.”

I emailed Stuller after the presentation asking what are the best ways to support the Gamer Girl/geek girl movement.

As an adult, I proudly claim the titles of feminist, podcaster and geek. I was grateful to listen to Stuller’s presentation and for the reminder that geek culture amplifies a diverse culture of voices.

What we do does matter. We should celebrate our inner geeks and use the enthusiasm we have for characters and stories that continue to change our culture for the better.

To learn more about Jennifer Stuller, please visit her website: http://ink-stainedamazon.com/. Learn more about GeekGirlCon, held in Seattle on Oct. 10 and 11 at http://geekgirlcon.com/.

Katie Woodzick works at Hedgebrook as an External Relations Manager. She is also an actor and director who can be seen on local stages, and the host of the Theatrical Mustang Podcast: theatricalmustang.podbean.com. She’s directing “The Pillowman” at OutCast Productions, running June 10-25: http://www.brownpapertickets.com/event/wlm/1726326.