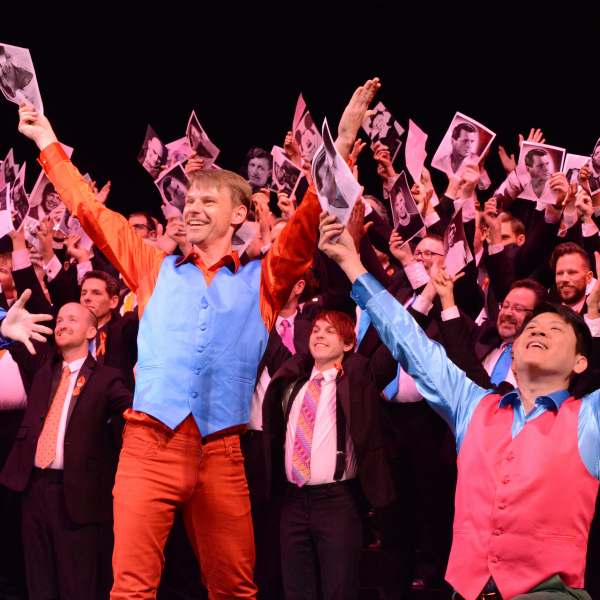 Razzle-dazzle and stardust will be the order of the night when Seattle Men’s Chorus brings “The Great White Way” to Whidbey Island. The group will be performing its show “Everything Broadway” as an outreach performance to benefit CADA (Citizens Against Domestic and Sexual Abuse). The performance will happen 7 p.m. Saturday night, April 23, at the South Whidbey High School Performing Arts Center in Langley.

This concert is CADA’s annual fundraising event. While the organization receives funding from other sources, such as government agencies and groups like United Way, those funds often come with specific stipulations on how the money can be spent. “The money that is raised from this event is very unique,” said CADA Executive Director Cynde Robinson. “Often our clients don’t have first month’s rent, or somebody would really like to get someplace else in the USA where they’re safer. How are they going to get there? What’s their transportation going to be? We can put them on a plane or a bus with this money. It can make a huge difference for the clients we serve.”

Seattle Men’s Chorus (SMC) was also founded in 1979. According to the Web page, it and its sister organization Seattle Women’s Chorus “comprise the largest community chorus organization in North America, and stand out as the largest LGBT-identified men’s and women’s choruses in the world.”  “Everything Broadway” marks the penultimate appearance by SMC’s artistic director Dennis Coleman, who is retiring after 35 years with the organization.

Seattle Men’s Chorus calls the show “the definitive guide to show tunes” and promises “Broadway’s biggest hits and hidden gems.” Songs scheduled for the performance include “Hello Dolly,” “Luck Be a Lady,” “If I Were a Rich Man,” “Always Look on the Bright Side of Life,” “Not My Father’s Son” and many more.

A pre-event VIP reception is happening that same evening at a private waterfront home in Langley-by-the-Sea. Food and wine will be sponsored by Windermere Realty, and guests will receive a private performance by Seattle Men’s Chorus’ small ensemble group, “Captain Smartypants.”

Langley residents Colin and Debra Campbell are delighted to host the pre-event VIP reception once again. “I have a personal respect for CADA,” said Debra Campbell. “If we’d had something like this when I was a child, my mother would have had a safe haven to go to during a tough period in her life.”

In acknowledging the tremendous effort an event such as this requires, CADA’s Robinson is deeply grateful: “From the organizers, to Seattle Men’s Chorus, to Joe Mosolino (owner of Windermere Realty), to the Campbells — all of these people come together – it shows a tremendous amount of support for the work we do here, and we greatly appreciate it. We know people could do other things, and we appreciate that they choose to support CADA.”

Tickets for both the concert and the pre-concert VIP reception can be purchased online at http://cadaconcert.brownpapertickets.com. Those preferring to pay by check or cash can go to the CADA office in Oak Harbor, Bayleaf in Coupeville, or Moonraker Books in Langley.

Citizens Against Domestic and Sexual Abuse has served Island County since 1979 (Graphic provided by CADA).

Leslie Irish Evans is a podcast host, Huffington Post blogger, and the author of Peeling Mom Off the Ceiling: Reclaiming Your Life From Your Kids. She lives in Langley, WA. Learn more about her at http://www.leslieirishevans.com.