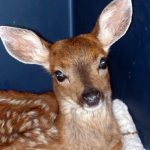 Finding Baby Animals: What to Do

On Whidbey Island, wildlife abounds. Consequently, spring babies are everywhere: huddled within sword fern shadows, peering out from tree roots, crying for food in moss cradles, and even sprawled on open, chilly beaches.

One look at these babies’ big eyes and vulnerability (which mimic that of our own infants), and our emotions get involved. Called “baby schema,” the theory attributes the fact that we’re driven to grab and protect adorable animal infants to a primal urge that motivates caretaking and ensures the survival of our own species.

Nonetheless, many well-intentioned rescuers flood Whidbey Island veterinarians, animal rehabilitators, and organizations when they bring in spring babies. “It’s often not obvious that the parents are around,” warns Dr. David Parent, who is licensed for short-term wildlife care at Useless Bay Animal Clinic in Freeland. Short-term local caregivers usually wind up transporting animals to facilities such as Wolf Hollow Wildlife Rehabilitation Center on San Juan Island or the PAWS Wildlife Center in Lynwood.

So, what should you do if you’re outdoors, encounter a baby animal that appears to be alone or even abandoned, and you get overwhelmed by baby schema?

Barred owlets may, according to Steve Layman, be protected from predators by the unscented forest air trapped in fluffy feathers; chasing the owlet (frantic movement) could destroy that protection. (Photo courtesy of Wolf Hollow Wildlife Rehabilitation Center)

Prepare in advance. Access the “I Found a Baby Bird” diagram using your smartphone. Research wildlife rescue and rehabilitation, so you have correct information, not urban legend. “For instance,” says Parent, “Human scent won’t drive a parent away.” Picking up a naked (unfeathered) baby bird and putting it back in the nest is fine.

This baby crow (indicated by blue eyes and the pink color around the bill) has feathers, even if they are scruffy, and isn’t in immediate danger. Parents will be nearby; leave this baby alone. (Photo by Marian Blue)

Most fledgling birds need only a day or two of practice before being able to fly well. But there’s an exception. “Any meat in the nest begins to smell and attract predators,” says Steve Layman, a Whidbey falconer with multiple wildlife licenses. “So, owls need to leave long before they can fly.” Consequently, observers may see owlets in low branches or on the ground for longer periods of time. They don’t usually need to be rescued.

Seal pups quickly trigger the baby schema urge. Not only are they adorable, but they’re found on beaches, with little cover, where humans and their pets visit.

Who wouldn’t want to hug this baby? Wait! This pup is healthy, well-fed, and lying in the sun to dry out. Stay at least 100 yards away! (Photo by Sandy Dubpernell and courtesy of Central Puget Sound Marine Mammal Stranding Network)

According to Parent, human intervention ranges from tourists who take pups to a hotel bathtub to residents who wrap pups up for a trip to the vet.

On its website, the Central Puget Sound Marine Mammal Stranding Network reminds people that seals leave their pups on the beach to dry out while the parent hunts. If curious humans or dogs frighten pups back into the water, they could die of exposure. (Never pour water on a baby seal).

The Stranding Network reminds people that federal law requires them to maintain a distance of 100 yards from marine mammals. (You can report violators to the NOAA Marine Mammal Enforcement Office at 1-800-853-1964.)

In addition, you can call the Stranding Network, which is part of the Orca Network, to report a pup and get information. The organization can post signs and create barriers to warn people to stay away if necessary. Unless the pup is in obvious distress, such as entangled or bleeding, the best action is to stay away; the mother won’t return if people are nearby.

Whidbey Island is home to many land mammals: raccoons, weasels, mink, beaver, otters, foxes, coyotes, rabbits, bats, squirrels, and more. Of all of these animals, the one that most often triggers the baby schema is the fawn. We may think of deer as pests in our gardens, but if we see a fawn curled up in a bush, the desire to pick it up can be overwhelming.

Fawns are a common sight, but lone fawns usually have a parent nearby. (Photo courtesy of Wolf Hollow Wildlife Rehabilitation Center)

Parent warns people that deer leave their fawns, visiting them infrequently – three or four times a day to nurse, sometimes for only five minutes. “Between visits, the fawn may move around, into people’s yards or around roads. This is normal fawn behavior.” Even if the fawn is calling or seems confused, that, too, is normal. “The only way a person should assume that the mother is dead is if the fawn is seen sniffing or trying to nurse from a freshly killed doe,” Parent continues. In that case, the fawn needs help.

If a fawn is in an unsafe location – for instance, lying on a road – pick it up and move it. Parent recommends moving it 100 to 200 feet away at least. Again, the fawn won’t be rejected because of human scent.

Baby otters tip the cuteness scale and trigger in us what some scientists call the cuteness gene. (Photo courtesy of Useless Bay Animal Clinic)

Whatever baby you find, the staff at Best Friend’s Veterinary Center in Oak Harbor warns people that, unless you are a trained/licensed rehabilitator or a vet certified for short-term care, it’s illegal to try to care for wildlife in your home. “You can monitor, but do so from a distance. People think a baby is abandoned, but the parents won’t approach it while people are around.” The safe distance varies, but remaining at least 100 yards away is often recommended.

Monitoring can take a lot of patience. For instance, Layman recommends wearing a red light to monitor owls at night, which is when they most often feed their young (never use flash photography on wildlife). Some animals need to be monitored for a few days before determining that a parent isn’t around.

After monitoring, if it’s obvious that the baby needs help, take it to the nearest rehabilitator or care facility. If in doubt, all local resources are willing to talk you through the situation.

One other thing people can do is “Keep your cats and dogs inside or on a leash this time of year,” adds Layman.

Finally, if you find you enjoy the wildlife on Whidbey, consider volunteering: “We couldn’t do our work here without our wonderful volunteers,” says Aitken. Perhaps you can find a new, wild niche on Whidbey.

More extensive rehabilitation, information, and resources and care are available at:

For more information about wildlife rehabilitation in Washington, visit the Washington Department of Fish and Wildlife Conservation

Marian Blue edits, writes, and farms on South Whidbey. Her writing and editorial work has appeared internationally since the 1970s. She recently retired from 20 years of teaching at Skagit Valley College. She has two Websites: Blue & Ude Writers Services and Sunbreak Press.