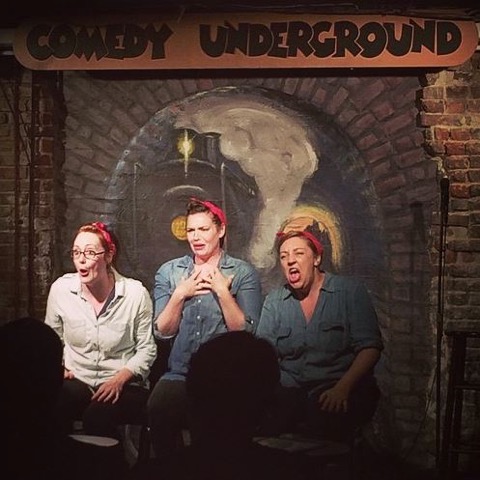 Clayton Weller has produced over 700 shows at The Pocket Theater in Greenwood. An actor and sketch comedy performer, Weller saw the need in Seattle for low-cost performance spaces where first time producers could get experience.

Three years ago, he launched a crowd-funding campaign with a goal of $8,000 in hopes of opening a new space for local performers. Seattle theatre artists were incredibly enthusiastic about the campaign, and Weller raised over $30,000.

In 2014, The Pocket Theatre opened its doors. The small incubator venue soon drew a strong and loyal following. Weller produces 25-40 unique performances a month. He focuses on shows and groups who don’t fit traditional performance molds. Performers are never charged for performance rentals.

The view of the lobby of The Pocket Theater in Greenwood.

“We’ve been running sustainably in our own venue for almost two years and have expanded enough that we’ve needed to take over a second venue,” Weller said. “We have dance, comedy, music, burlesque, drag, storytelling and a bunch of stuff that defies genre. All under one friendly roof. It’s a labor of love, and we love every minute of it.”

OutCast Productions, known for producing “theatre with a social conscience” on Whidbey Island, shares many of Weller’s views. OutCast Productions Founding Co-Artistic Director Ned Farley was first introduced to Weller and The Pocket Theatre earlier this year. Farley decided to discuss a possible collaboration of bringing Seattle performers from The Pocket Theater up to the OutCast Black Box stage.

Promotional photo from Illuminati: The Musical

“We here at OutCast believe we have an amazing patron base who appreciate the kinds of theater we produce – theater that makes you think, asks us to consider some of the hard questions that face us at this particular time in the world,” Farley said. “In addition, our audiences also enjoy laugh-out-loud (even as we blush) theater. As such, we think there is a niche that is untapped in terms of entertainment from a wider group of performers who produce new, creative and edgier material. We believe that The Pocket Theater can provide just that, and we hope our patrons will come out to support this new venture.”

Weller worked with Farley to choose seven different Seattle groups who will perform six times over the weekend of April 15-17. The performers were selected based on quality and variety.

“All of these groups and shows have had successful runs at The Pocket,” Weller said. “They’re some of my absolute favorite performers to grace our stage.”

An example of such a performer is Woody Schticks, a Seattle-based actor, choreographer and performance artist. Schticks is premiering his brand-new solo extravaganza, Shlong Song, on Saturday at 7:30 p.m. He describes the show as filled with “sexual misadventures and hanky-panky hijinks.”

Schticks grew up with no shortage of slot machines and showgirls in Atlantic City, New Jersey. Training first in ballet, he danced as a company member of the Atlantic Contemporary Ballet Theatre (now the Atlantic City Ballet). While studying classical music, competing as a championship handbell ringer, and attending Bible college, Schticks performed throughout New Jersey, then moving to New York City to continue his training in Acting and Drama Therapy before moving to Seattle.

Other productions include “Illuminati the Musical,” the stand-up of Wisecrack, the short form comedy of Day Job and the dark comedic storytelling of Bill Bernat.

Tickets are $10 per performance and can be purchased online: http://www.brownpapertickets.com/event/2525317, reserved by emailing ocp@whidbey.com or purchased by check or cash at the Black Box theatre prior to each performance.

“Who doesn’t get excited by a First Date? Our patrons get the envious opportunity to be voyeurs in this new venture,” Farley offered. “OutCast + Pocket…perhaps it’s a match made in heaven?”

Katie Woodzick works at Hedgebrook as an External Relations Manager. Katie is also an actor and director who can be seen on local stages and the host of the Theatrical Mustang Podcast: theatricalmustang.podbean.com.