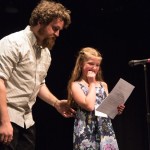 The Whidbey Island Writers Association (WIWA) has encouraged and recognized writing talent among Whidbey Island students through the Celebrate Writing Contest since 1999, but this year, five nonprofit and for-profit organizations collaborated to recognize and support young writers.

After volunteer judges Jim Carroll, Mureall Hebert, Lisa Kois, Jo Meador, Helen Sears, and Katie Woodzick evaluated and provided personalized feedback on each entry, Whidbey Children’s Theater (WCT) board member Carolyn Tamler tallied scores and notified winners. It was Tamler who encouraged WIWA to collaborate with WCT, where winners read their work aloud at an award ceremony on Saturday, May 30. Before the presentation, WCT staffers Michael and Kathryn Morgen coached winners in performing their work, making both the stage and microphone feel like much friendlier places.

Photographer David Welton represented Whidbey Life Magazine, the third organization to participate in this collaboration and took the photos you see here as winners worked with Michael and Kathryn. Videographer Robbie Cribbs represented WhidbeyTV, the fourth organization, and recorded winners as they presented. Annie Horton and Mary Rose Anderson, of Whidbey Air Radio, represent the fifth collaborating organization and will record winners as they read their work at the KWPA studio in Coupeville later this month.

Each week in June Whidbey Life Magazine will publish the winners of this year’s contest in a special Celebrate Writing section. This first week showcases the talents of the First Prize winners for poetry and short fiction. In the following three weeks you’ll be fortunate enough to read the second and third place winners in both categories.

A black flame
Always flickering
Ever consuming
Forever there, resting or raging
It courses through veins
Destroying everything
All hopes
All dreams
Are consumed by fear

Fearful of what else it may bring,
You attempt to flee
But it has consumed you as well.
Your limbs obey nothing
And you are falling,
Falling into everlasting darkness
Your thoughts jumble into a
Race for freedom

Fear
It is a black flame
Always flickering
Ever consuming

I remember my pet frog Hop. He was such a fatty.

I remember that he got skinny when he did not have food. Only for a couple days though.

I remember the day I buried him and put a rock over him so no animals will eat him.

I remember being so sad I could not even stop thinking about it.

I love my life because I was born in a wonderful world.

I dream of being a drone controller in the navy.

I worry about me getting lost in the woods.

I feel happy with my life.

I try to be friendly to others.

I want to ask God what heaven looks like.

I love my life because I get to live and have a family.

I dream of being a professional soccer player.

For fun I like to go outside and play soccer.

I worry about dying in a car crash or plane.

I feel amazing because spring break is coming.

I hope I get married.

I try to be nice to people.

I want to ask God if my family can go to heaven with him.

The wind is an angry bird

Flying through the sky with speed

When in a foul mood it tears down houses and trees

Silver and calm is the wind

Not ever meaning to do harm

And the trees love the music swaying gently to the hymn

The wind may be ferocious but the wind is a bird.

Beep! Beep!
The sound woke me early in the morning. I tossed and turned, but it was no use. The alarm kept beeping.
“Why is it going off so early?” I muttered, grasping my alarm clock and tossing it at the wall. It fell on the floor with a C​RASH!
I leaned over to the edge of my bed and picked up my phone. As my fingers danced across the screen, entering the password, I realized something.
Today was April Fool’s Day.
I love April Fool’s day. I have four sisters to prank, so it’s my favorite holiday.
I jumped out of bed. “I have so much to do!” I exclaimed.
I raced downstairs and leapt into my seat, tapping my chin thoughtfully. “What to do first?” I wondered.
After minutes of plotting, I thought of my first prank. I stood up and snatched up my older sister’s new camera. I cackled evilly as I stuffed it underneath the couch. I was just in time, too. A second later, Rosie paraded into the room. She was obviously in a good mood. A wide grin was spread across her face.
“Good morning, Molly!” she exclaimed when she spotted me.
“Morning,” I replied, trying not to show how eager I was.
She strolled over to the coffee table, where her camera usually sits. When she saw that it had disappeared, she went crazy.
“Ahh!! Where’s my camera?? I need it for photography!” She was running from place to place, her hands gripped tightly in her hair.
After about ten minutes of Rosie racing endlessly around the room, she slowed to a stop. She spotted a pink strap sticking out from under the couch.
“Wait a minute…” she said. Rosie pulled the strap, and out came her camera.
“Who put this here?” she demanded, whisking around to face me. But I was already gone.
I had silently escaped to the kitchen when she discovered the strap sticking out from underneath the couch. I snickered as I thought about what to do next.
“There,” I announced just as Gracie, my eleven year old sister, slowly wheeled into the room on her wheelchair. This prank was meant for her, because it was not very mean, and Gracie was already cursed enough with her broken leg.
“Good morning, Gracie! How did you sleep? Good? That’s great! What do you want for breakfast?” The flow of words rushed out of my mouth in a hurry.
“Um…that’s very nice of you to offer me breakfast, but I think I can get it myself,” she said with a tiny hint of suspicion in her voice.
“Okay! Suit yourself!”
She glanced at me before grabbing a bowl of frozen berries. She opened the microwave, and when she did, popcorn spilled all over her. It clung to her dress, her hair, and me. I giggled quietly before I said, “I’m so sorry that happened to you, Gracie! I wonder who left that popcorn in the microwave.”
I skipped out of the kitchen, leaving Gracie glaring. As I trotted away, she picked up a piece of popcorn and nibbled it angrily.
I ran upstairs to my room. I swiftly stuffed a Whoopee cushion underneath the blanket, and sat on the edge of the bed. Three minutes later, Sophie waltzed in, yawning and stretching.
“I’m so tired!” she said. “And I can’t go back to bed because my sheets are being washed.”
“Oh, you can sleep in my bed!” I shouted. This was just perfect.
“Really? Thanks!” She jumped into the bed, right on top of the Whoopee cushion. It let out a loud, long noise. I laughed so hard as I galloped down the stairs.
“I’ll get you back!” she yelled.
While I was busy planning my next prank, I was clueless to the fact that my sisters were meeting downstairs. They were talking about me.
All of them were chatting angrily at the same time. Then, my youngest sister, Sadie, strolled into the room.
“Woah, woah, woah!” she exclaimed. “What’s going on here?” “Molly hid my camera!”
“Molly spilled popcorn on me!”
“Molly put a Whoopee cushion in the bed!”
Sadie eyed them with a hint of a smile. “Well, then there’s only one thing to do. Someone go get Molly’s purse.”
Upstairs, in Sadie’s room, I was about to put vinegar in her water bottle. I looked around, in search of my purse, where I had stashed the vinegar. I found it laying under the bed. I opened it up, but there was no vinegar. There was a snake!
“Ahh! A snake!” I shrieked, dropping my purse.
A second later, all my sisters jumped out at me, scaring me even more. “April Fools!” they shouted.
And that’s when I realized that I had been pranked. The snake was fake.

Coaching was provided by Michael Morgen and Kathryn Morgen of the Whidbey Children’s Theater.

The warm-up circle helps the readers prepare to read their works to the public.

Everyone gets loose in practice

Featured photo: Devin King gets some coaching from Michael Morgen.