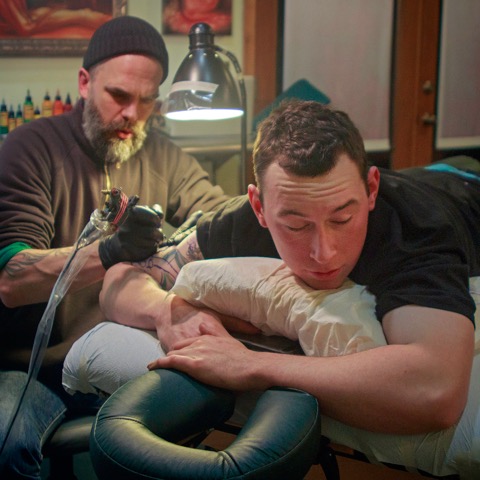 For Some, Tattoos Heal From the Outside In

Hayden Hixon’s mother is always with him. All he has to do is look to his right, and she is there in flesh and blood. In a way, at least.

“This is for my mother,” he said as he was lying down on his stomach one Friday evening on a massage table in tattoo artist Eric Tunnell’s Dig It tattoo studio, located in downtown Langley.

Hixon’s in-progress mermaid composition is one of three tattoos he has commissioned from Tunnell. Each is different, but all represent his life thus far. His mermaid is a direct reference to his mother. “She doesn’t really like tattoos, but she loves that it’s about her,” he says. (Photo by David Welton)

Hixon, a 20-year-old Clinton resident, got a warm look on his face as he gestured toward the raven-haired mermaid on his right shoulder.

“She loves mermaids. They remind me of her, and also remind me of time we spent at my family’s beach house. So it’s part of my history, too.” Hixon said.

By the end of the night, he would have black outlines of the next stage of the design that he and Eric had planned, a large, rather handsy octopus to encircle his bicep and keep his mermaid-mother company forever.

Tattoos mean many things to many people and have a shifting history in terms of public opinion. At times, they have been used to mark royalty. Other times, they have designated someone as property. Some periods of history have seen tattoos as pure rebellion, while other times it has been a mark of the pious. But in their earliest form, their utility might surprise some people: a protocol for healing.

Tattoo origin stories cannot be 100 percent proven, but if they’re true, it would seem that everything old is new again. Tunnell has seen transformations beyond the cosmetic after his clients come in for an ink session at Dig It.

Tunnell is an artist who works in many types of media, such as the canvas on the wall behind him and wood/metal sculpture. Many artists can claim mastery of more than one material or format, but the number who can also claim skin as a medium is undoubtedly small. (Photo by David Welton)

“I call people who come to me ‘patients,’ because that is really what they are. It isn’t just the medical nature of what I am doing. The work creates a human connection that is something special. A lot of times, it can be like a six-hour therapy session, depending on why someone is here,” Tunnell said.

Maybe it isn’t the most sound and tested form of healing protocols, but tattoo artists have seen people walk into their studios broken and beat by things life has handed to them, and then standing taller and walking lighter on their way out.

It could be said that the motorized whir of a tattoo gun is capable of stitching up a soul as its needle strikes through layers of skin. When the needle is lifted, it leaves behind a marked path and patterns that become permanent evidence of whatever life-changing incident, discovery of self, statement of truth (or vain desire) drove his clientele to seek healing, according to Tunnell.

To date, tattoos found on an elderly man, whose body was found preserved in the mountains forming the Austrian-Italian border, are the earliest example of the practice itself. Iceman, as our early adopter of tattooing was dubbed, is believed to have lived in about 3,000 B.C. He stood about 5 feet 5 inches tall, with brown hair and a matching beard. When food and bacteria found in his stomach and physical patterns of both injuries and health are compared, Iceman seems to have lived a shepherd’s life in the mountains, where his mummified remains were unearthed in 1991.

Iceman’s skin is punctuated with small tattoos dotting areas of his body that researchers determined to be likely sites of injury or arthritis. Some of these tattoos are found in spots that he could not have reached himself, and they match treatment patterns used in acupuncture (which, as a therapeutic practice, was not widely adopted until at least one to two thousand years after the good shepherd was alive).

Tunnell is meticulous in applying an ink rendering of the next phase of “patient” Hixon’s tattoo. Tunnell sketched the image by hand on plastic wrap in advance, and then placed the original design around Hixon’s bicep. (Photo by David Welton)

For Iceman, tattoos might have been just what the doctor ordered. And while a lot has changed between Iceman’s death and his recent rebirth into mummified fame, tattoos remain a go-to method for some to heal themselves from bumps and bruises to heart and soul. Others turn to tattoos out of vanity as some people turn to aesthetic medicine.

It isn’t just the life experience of getting the tattoo that heals, according to Tunnell. The physical and spiritual aspects of tattooing wield a pretty hefty healing punch as well.

“There’s something that happens to people when they’re getting a tattoo,” he says. “It can move someone into a different place. It can be like meditation or an awakening. Sometimes it looks like someone is trading one kind of pain for pain of a different sort. It’s almost like the physical pain helps burn off the emotional pain, and the emotional pain dissipates.”

The artist’s level of concentration is deeply apparent in his facial
expressions while he tattoos, even more apparent in the precision of his motions and, then clearly displayed in his final product.(Photo by David Welton)

Visual cues of all kinds speak volumes without a single syllable being spoken. At times, though, a tattoo can leave room for people to speak directly about their own journey through life by moving others to ask questions that the inked images raise. Questions from others that are sparked by the tattoo open the door for talk therapy of a sort, and healing comes as part of those momentary connections, as well.

Tattoo artist Andrew Schultz knows well how a visible tattoo leads to healing. His Greenbank studio, Black Mast Tattoo Company, has been serving up tattoos for about two years. His love of tattoos reaches back about 10 years, when he was getting his own ink. A tattoo on his neck is quite significant, placed in that visible spot in remembrance of his brother, who passed away when Andrew was about 17.

“When I first got it, I wanted to be able to spread around the person my brother was. I wanted to have a chance to tell people what an amazing person he was. I didn’t want him to be forgotten.” Schultz says.

“Now, I get a funny response to my answers when people ask about the tattoo. They say ‘Oh, I’m so sorry’ and I say, ‘I’m fine now.’ People look at me like I’m a horrible person, but the reality is that I really needed that tattoo after it happened because it helped me talk about it. That isn’t how I answered people a long time ago, but the tattoo helped me get to the place where I’m actually able to say that I’m OK,” Schultz says.

In addition to driving conversation between strangers, the artists say the ties that bind them to their clients are truly unique. For Tunnell, that role brings a unique benefit to his own life experience. By his own account, the artist is not always the most outgoing chap in the room, and he enjoys the opportunity to join with other people in a way that is fruitful for all involved.

While the level of precision can be stressful on the artist, and the level of pain can be outlandish for the patient, the shared discomfort builds a uniquely healing connection between both parties. (Photo by David Welton)

“It’s a luxury for me to be able to talk with people like this. I have a huge appreciation for these chances for me to share experiences with other people. We all have our own journeys and all of them are different. Human connection is rare (in present times) and I think I’m lucky to be part of a person’s life in this way.” Tunnell says.

Tattoos are a personal choice, for people who to get them, create them, and judge them. Love them or hate them, their place in history is long and as permanent as the ink used to make them.

Whether the year is 3000 BC or nearly 2017, though, it would seem that there is evidence to support the humanness of tattooing, as well as proof of the ways tattoos might bring people together in dialogue. And that quality is both right on time and timeless.