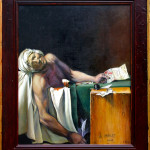 ‘Forgeries at Froggwell’ set for Friday, July 31 through Sunday, August 2

You can hardly throw a rock on Whidbey Island without hitting an artist, (or, for that matter, a yoga instructor.) But while we’re well endowed with contemporary artworks, you have to travel quite a long way to enjoy great art from past centuries.

However, since 2009, the classic masterpieces come to Freeland the first weekend of every other August… in the form of, um… forgeries.

The Forgeries at Froggwell show has its roots in the love of classical painting and sculpture. The owner of Froggwell Gardens has dubbed his home The Froggwell Cultural Institute, claiming that the house and garden are themselves a bit of a forgery or—at least—an homage to English estates and their gardens.

A Barbara Hepworth sculpture.  Or is it? (photo courtesy of The Froggwell Cultural Institute)

Most artists, whether self-taught or art school-educated, have made copies of masterworks as part of their training. It’s a great learning tool that helps a student artist understand there is more to painting than just depicting subject matter. Lessons about color, composition, the application of paint, and the creation of illusions with colors, shapes and values are the payoff to the copy-making artist.

The show at Froggwell had its origin in two events that occurred in 1999. The Seattle Art Museum held a show of John Singer Sargent’s work starting in late December. Looking at his painting “A Street Scene in Venice,” I remarked, “I wish I’d painted that.” I was challenged to do just that, so I did.

Shortly after that, while on a trip to Amsterdam, we admired a painting in a small gallery. The gallery owner said that there was a small problem with the painting; it was a forgery of the work of a very famous painter whose art could be found in The Rijksmuseum as well as other museums across Holland. The painting of forgeries to sell to the Germans during their occupation of Holland during World War II was a popular pastime among Dutch painters. This story was guaranteed to hook us, and the painting came to Whidbey to become the first forgery in the Froggwell Collection.

“Forgeries at Froggwell” grew out of another show that has been hosted there since 2004, showcasing the work of a select group of painters, sculptors and printmakers on the island. After four years of doing the Froggwell Invitational, we decided to make it a biennial, but to have a different kind of show on the alternating years.

The first show, in 2009, had the theme: “paint a copy of your favorite painting”; the only requirement was that the copied artist had to be deceased. For the 2011 show, we took a rather tongue-in-cheek approach and declared that the show would commemorate the 98th Anniversary of the 1913 Armory Show of New York (because any idiot can hold a 100th anniversary show, but it takes a special kind of idiot to celebrate the 98th anniversary). All the work in this show had to copy work exhibited in the original 1913 show.

We were lucky enough to be in New York two years later and see the real 100th anniversary exhibition of the 1913 Armory Show at The New York Historical Society. About half a dozen original paintings in the show were ones that we had copied and it was inspiring to see the real thing and appreciate what a good job we had done copying them.

Our 2013 “Forgery” theme was “From the School of…” and the participating artists created work “in the style of…” rather than creating exact copies. They were also encouraged to invent stories about these inauthentic works to explain their rather dubious provenance. I created an excerpt from Sargent’s journal to explain the painting of Madame ‘P.

This year’s show returns to our wide-open favorite painting theme, with over 25 artists participating. Many of the artists have been in the show before, but a number of them are new to this year’s show. Among the artists to be forged are John Singer Sargent, Jacque Louis David, J.M.W. Turner, Frida Kahlo, Mark Rothko, Edward Hopper, Louise Nevelson and many more.

So if a trip to the Tate Britain or The Metropolitan Museum is not in your budget this year, Froggwell Garden is just around the corner.

All works in the show are for sale, so if you’ve always had a hankering for a John Singer Sargent or Thomas Moran but don’t have a spare million in your bank account, you might find the painting of your dreams this weekend.

Froggwell Garden is located at 5508 Double Bluff Rd. in Freeland on Whidbey Island. The show will be open from 10 a.m. through 6 p.m. Friday, July 31 through Sunday, Aug. 2.

For more information about the artists, the show, and driving directions, visit http://froggwell.wordpress.com or email froggwellbiennale@gmail.com.

Image at top: J L David’s “Death of Marat”?   Or is it? (photo courtesy of The Froggwell Cultural Institute)

Anne Belov is a painter, printmaker, cartoonist, and notorious forger living on Whidbey Island. When not channeling the spirit of John Singer Sargent, she channels her own muse, writes for Whidbey Life Magazine, and encourages pandas to behave badly. You can see her work at The Rob Schouten Gallery and her cartoons on The Panda Chronicles. You will find her this week-end at Froggwell.