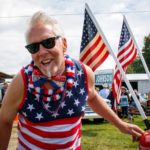 Whidbey Islanders had two simultaneous celebrations: our country’s 240th Independence Day and the 101st Anniversary of the Maxwelton Fourth of July Parade.  The well-organized event was attended by thousands and all had a good time.

A contemporary Uncle Sam, aka Bob Bowling, greets marchers at the foot of Swede Hill Road.

This year TWO gorillas shared their bananas, courtesy of The Goose Grocer.

Chickens and ducks and marchers tossed candy to children along the two-block parade route.

Others chose to walk the whole parade while hula-hooping.

Dan Anderson, in traditional Swedish garb, marched with Island Strings as he played his nyckelharpa.

David Welton is a retired physician and staff photographer for Whidbey Life Magazine.