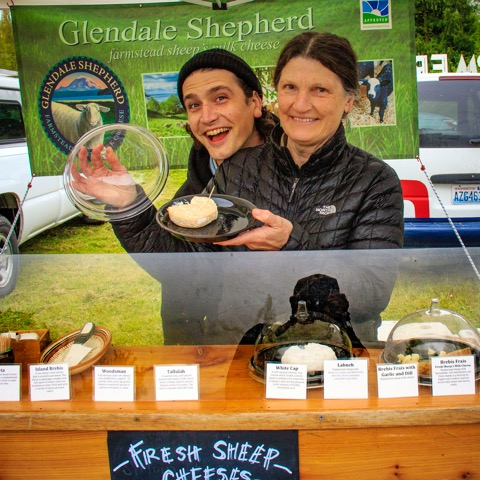 It’s springtime, and lambs are being born at the Glendale Shepherd dairy farm. Their mamas, about 60 ewes, are milked twice a day to produce milk for yogurt, soft brebis frais, and hard cheese. The ewes are a cross between European and North American breeds, and owners Lynn and Stan Swanson have been making award-winning cheese from their milk for the past five years.

The family runs a Grade A dairy in Clinton and is committed to practicing sustainable agriculture with artisan sheep milk cheeses and pasture-raised lamb. With forest, pasture, ponds, and meadows, the farm provides a diverse landscape for livestock and wildlife alike.

Lambs that are weaned are called “weaners.” This group of young rams and ewes eat special blends of organic grains and grasses. (Photo by David Welton)

“Lynn and I have been here for 30 years,” says Stan Swanson, his loyal dog Cocoa on his lap. Since he was injured cutting a tree in December of 2015, his motorized “hot rod” gets him around the family farm. After the accident, which crushed his back, Stan was flown to Harborview Medical Center, where he says he was fortunate to have excellent care and doctors who put him back together with nuts and bolts. The retired dentist and former rock climber says the community held fundraisers to help offset the cost of medical care. He remains upbeat and cracks jokes as he leads a tour of the rolling hills of his family farm. “The community was awesome. Everyone pulled together,” Swanson says. “Now all I need is a computer to convert my brain waves to my legs. (Meanwhile) you should see me rod around Costco!”

Stan Swanson and his sidekick Cocoa. (Photo by David Welton)

Lynn Swanson, also a talented clothing designer and sculptor, ran a summer horse camp for years before the couple became interested in making sheep milk cheese after buying the flock from another island artisan cheese maker nearly 10 years ago. These days, the Swansons are the only commercial cheese makers on the island.

“We put together the milking barn and got certified as a dairy,” Stan says. “Then we put in a pasteurizer. It was a lot of work.”

Lynn popped out of the super-clean kitchen, where she was preparing fresh yogurt and brebis frais, the soft cream-cheese-like pasteurized cheese sold locally at the Star Store in Langley, Bayleaf in Coupeville, and the Bayview Farmer’s Market.

At the Ballard Farmer’s Market last Sunday, business was brisk at the Glendale Shepherd booth. Regulars such as chiropractor Gary Moskowitz stop by each week to return empty jars and buy new ones full of fresh yogurt. Moskowitz says he’s been coming by for years. He was greeted as a regular as he approached the counter.

“We were looking for some new yogurt. My wife tried their sheep yogurt, and it was the best yogurt she’s ever had,” Moskowitz says. “We get it all the time for smoothies. My wife can’t do cow’s milk, so she does goat or sheep milk. The cheeses (from Glendale Shepherd) are unbelievable. I don’t even eat cheese, just never have, and I come here all the time to buy cheese for my wife and yogurt for us. Their people are incredible, too.”

Back at the farm, Stan rods over to the barn where a newborn baby ram calls out. The newborn is nestled with other lambs in a bed of straw under a heat lamp. Lambs are separated from their mothers at birth and fed formula, a common practice in working dairies to minimize the stress of separation.

Anna Magnuson, who once attended summer horse camp at the Swanson farm, now helps run the dairy business with the Swansons and their son Erik.

“My history here is a long, 20-year story,” Magnuson says. “I’d come here as a kid for horse camp. Then I went to school and worked in Manhattan with Beecher’s Handmade Cheese and later in Seattle, with artisan cheeses at Whole Foods. My parents said I should talk to the Swansons, and I moved out here on a whim.”

Stan says there were about 120 lambs born this year. Some will be used for dairy and some for meat. All wear ear tags: right ears for rams and left ears for ewes.

Holding the newborn ram with his short buds of wool and his long legs, Magnuson says he resembled his mama and grandma with their “freckles” of black dots sprinkled amid the white wool.

Magnuson, Becca Shim, and Erik Swanson milk the ewes twice a day. This season is the first time she has helped midwife some of the lambs at birth. After about a month, the lambs graduate to “weaner” status, meaning they no longer need milk. They grow strong on their diet of organic hay from Wilbur Bishop’s Ebey Road Farm and their diet is supplemented by a special organic blend of grains made just for these sheep. The ewes are fed grain and allowed to go in the pasture for about an hour a day. They’ll graze more as the pasture dries up and is not so muddy.

Erik and Lynn Swanson on opening day of this season’s Bayview Farmers’ Market. Erik is Stan and Lynn’s son and helps run the dairy with his parents. (Photo by David Welton)

Over in the store and kitchen, Lynn finishes filling sterilized glass bottles with fresh yogurt. She points proudly to a wooden board, which announces that Glendale Shepherd’s Tallulah cheese took first place in 2016 at the Washington Artisan Cheese Festival. Tallulah is soft, ripened, has a creamy interior and a smooth, mild, and nutty flavor. The award joins many others displayed in the farm store.

“I love their products from cheese to yogurt to meat to wool.” Dowdell says. “The Tallulah is my favorite with some chicken liver pate and herb crostinis.”

Some of the cheeses made by Glendale Shepherd that are sold at the Bayview Farmer’s Market. (Photo by David Welton)

Lynn Swanson says that she is in full compliance with the Food Safety Modernization Act, which requires certification and university classes to meet its strict standards. The legislation was a considerable reform of our nation’s food safety laws and was signed into law by President Obama on January 4, 2011. It aims to ensure that the U.S. food supply is safe by shifting the focus from responding to contamination to preventing it. The small farm has also earned an Animal Welfare Approved designation, meaning the animals are well-treated and cared for. Indeed, the sheep appear to be in a Zen state of mind.

“We need the same level of certification to operate as does a bigger dairy like Tillamook,” Swanson says. “I want to take no risks when it comes to protecting the public’s health.”

The farm store is open Sundays from 11 am to 4 pm. Farm tours are available by reservation.

Kate Poss worked as a library assistant at the Langley Library until last June, when she retired. She worked for three summers as a chef aboard a small Alaskan tour boat from 2008 to 2010. She was a newspaper reporter in Los Angeles for many years before moving to Whidbey Island, where she likes cooking for new and old friends, hiking, reading great fiction, and writing her second novel with friend Fred Bixby.

David Welton is a retired physician who has been a staff photographer for Whidbey Life Magazine since its early days.  His work has also appeared in museums, art galleries, newspapers, regional and national magazines, books, non-profit publicity, and on the back of the Whidbey Sea-Tac shuttle!