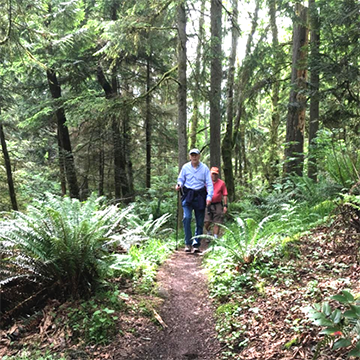 “The great thing about hiking on Whidbey,” said Sarah Boin, a longtime, avid hiker, is that you can’t get too lost; you’ll find yourself at the water or on a road.” She has hikes she affectionately calls “wood walks”—easy, relaxing and good training for her more rigorous 10-mile treks. Her favorite place to start out is Ebey’s Landing, where the view is spectacular and the trail connects with Kettle’s Trails. Other beginner hikes include Saratoga Woods or the trails at South Whidbey State Park.

Boin began hiking as a child with her family and has hiked all over the Northwest, both alone and with others. She said that Washington offers the most extraordinary hiking. There is something unexpected in hiking alone, she added, and says it’s a completely different experience when you can hear and see some things you might miss in a group.

Some of the Sons of the Beach (l-r): Bill Vogt, Dale Christiansen, Wayne Nehrlich, Paul Goldfinger and Dennis White   (photo by Chuck Clark)

“My experience is exactly the opposite,” Roger Britt said, referring to solitary hiking. “People enjoy chatting and socializing in these groups.” Britt is a member of the hiking groups Meet Feet and Sons of the Beach. “We don’t want people in these groups walking alone….” he said “Many trails have numerous forks and we wait at the forks so people don’t get lost.”

Sons of the Beach (SOB), a hiking group that is now closed, began with seven hikers in 2008. Paul Goldfinger, a long-time hiker when he moved to Whidbey 14 years ago, was one of the founding members; he credits George Jackman, a fellow hiker, with teaching him the local trails. “George is a great source of hiking knowledge, both here on Whidbey and all over the Northwest,” Goldfinger said. They met in 2004 during a work party to reroute a trail in Putney Woods on South Whidbey and began hiking many of the island’s trails: Saratoga Woods, South Whidbey State Park, Possession Point State Park, and Fort Ebey State Park. Jackman wanted to start a hiking group; Goldfinger had heard of the long-standing Ladies of the Beach, and knew a men’s group could draw similar interest.

Jackman, here since 1987, said he’s always enjoyed hiking, although he’s slowed down a bit. “Some people golf; this is what I do, I hike,” he said. He enjoys the group, he added, and the fact that many of the trails offer a period of time when you can choose to be alone, something some members have told him they prefer. “It’s the safest way to hike,” Jackson said. “You’re alone, but someone is still around.”

Dennis White on the trail   (photo by Chuck Clark)

The men’s hiking group has grown, with more than 100 hikers on the e-mail list, although only a dozen or so walk on any given week. Over a period of a year, they complete approximately 50 different trails. During the winter, the group meets for half-day hikes and then goes to lunch, or out for a beer. “Getting a beer is almost a requirement,” Goldfinger said. “We’ve debated calling ourselves the ‘Sons of the Brew.’”

During the summer, the SOBs occasionally go off-island, to areas such as Anacortes and Cranberry Lake, for longer, more challenging hikes. One of the most recent hikes was to Cougar Mountain in King County, with a distance of 6.4 miles and an elevation gain of 1,650 feet. The finale, according to Goldfinger, was a fine lunch at the Issaquah Brew House. The off-island hikes require coordination with ferry reservations and carpooling, but offer a more challenging trek. Goldfinger said he believes it’s the longer hikes that keep him fit.

Another hiking group with a long history is Meet Feet. Once called Whidbey Walkers, this group evolved into a coed group that gets together on Saturdays. During the summer, they sometimes schedule hikes on Fridays so members can be part of all the summer activity on Whidbey.

Britt started hiking with Meet Feet before joining Sons of the Beach. He has developed websites for both groups that record the key points, often including GPS-generated maps. The websites (see below) list the hikes and offer information about past hikes—a wealth of information for those just beginning to hike.

Almost all the current hikers with Meet Feet are retired; some still work, however, so the Saturday times are convenient for them, and there has been some recruitment to get younger hikers involved. In addition, Meet Feet allows dogs on leashes, so one’s best friend can also exercise. Meet Feet is always open and the hikes aren’t complicated, from both a hiking and carpooling perspective.

Richard Renninger, also a member of both groups, was a hiker in Juneau, Alaska, where the hikes were typically four to six hours. He said he still appreciates the longer, harder hikes off-island. “There are lots of pleasant hikes on the island, which is wonderful,” he added, “but I’ve pushed for rigorous activity, so we can work at the Cascades and Olympics.”

Renninger said he finds a certain peacefulness in the silence, and he enjoys the times and places you can break away, depending on the hike. But he also enjoys the socializing too, and “if you’re with a group, you’ll be missed eventually!”

For more information on Sons of the Beach and Meet Feet, check out the websites created by Roger Britt.

Deb Crager is originally from the Midwest but has lived on the island for 25 years. She wrote the book “101 Things to do on Whidbey Island: for a Day, a Weekend, or a Lifetime,” available on iPad and Kindle Fire, with older copies in print from Amazon and eBay.