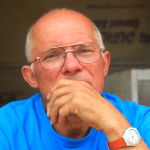 Go Past Five Speed Bumps to Find John de Wit. He Did.

John de Wit has revamped, reorganized, relocated, rebuilt, re-created and restored. Now he wants to reconnect. As an artist he has also re-emerged from a period that he characterizes as “lean” in terms of his work. It is, as he thoughtfully describes, as if a passage has been completed through a gray Pacific Northwest winter and he has emerged into energy-filled surroundings that have awakened his passion.

De Wit is a glass and mixed media artist who could be described as a curator of seemingly disparate objects. He is a curator in the sense that he creates, gathers, organizes and arranges elements in ways that allow the viewer to make unexpected discoveries.

“I was first drawn to glass by the immediacy of the process. For me, it all begins with the vessel. The vessel is the framework, the shape that inspires the outcome,” de Wit said

He begins with form as a starting point. The blown glass becomes a messenger to deliver its narrative to the viewer. An application of color and texture to the surface of the glass may suggest fabric or an organic material, such as bark. In mixed media sculptures, the glass is combined with wood, wire, rusted metal, bits of cast-off and found objects. Even though these elements may initially appear incongruent, they are joined together in a flawless synergy of motion and meaning. De Wit explained that familiar objects presented in unfamiliar ways allow viewers to bring their own story into the work.

“I want people to see objects in fresh ways, elements interacting to obfuscate their original intended purpose. Perhaps if people have this kind of experience, they may begin to see all things from a different perspective,” de Wit said.

De Wit’s work has been shown worldwide and can be seen in major corporate collections and galleries. His website includes the details of his numerous awards, achievements and galleries, in addition to photographs of a wide-ranging collection of sculpture.

From 5 to 7 p.m. on Thursday, July 3, de Wit will host an opening of his new Lake Leo studio. He wants to mark the occasion by asking friends, old and new—anyone who is interested—to join in a celebration of reconfiguring: new garden, new art, new studio, as only he can bring those things alive. His new spaces spring as organically from the earth as his abundant garden.

To find him, start by turning off Hwy. 525 north of Langley onto Crawford Road, then go over five speed bumps and make a turn onto Lake Leo Road. The studio is located next to Mukilteo Coffee Roasters.

As I talked to the artist at his studio, the coffee-infused air was filled with darting goldfinches, grosbeaks and tanagers whose wings seemed to absorb the sun and become illuminated from within. It was almost as if they were a projection of his vision in glass.

“We are a motley ragtag band of artists here on the island,” de Wit said. “Is that redundant?”

De Wit is now accepting commissions. Gallery and studio space will be open by appointment and during the first week of each month. Contact john@johndewit.com and view his artwork online.