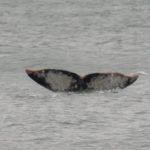 The small population of gray whales known as the North Puget “Sounders” return each year to feast on ghost shrimp in the tidal flats primarily around Whidbey, Camano, and Hat/Gedney Islands, and along Everett and Tulalip. The first gray whales this year were reported to the Orca Network’s Whale Sighting Network by Gary Lingenfelter, who observed them feeding on the intertidal flats off Tulalip at the mouth of Port Susan on February 28 and March 2.

This group of gray whales returns to Saratoga Passage and Possession Sound each spring for their annual three-month feeding foray in North Puget Sound. Cascadia Research of Olympia has been studying this population of gray whales for decades. In greater Puget Sound, we see approximately 12 grays per year, some have been seen every year since 1991. The whales are identified by the markings on the underside of their flukes, as well as by the patterns of barnacles, scars, and markings on their backs. Patch, or #49, was among the first identified by Cascadia in our local waters in 1991 and is a favorite of many local whale watchers, as he is easily identifiable by the large white patch on his right side, as well as white patches on the underside of his flukes.

This small group of gray whales typically arrives in our region in early March and stays through the end of May, feeding on ghost shrimp and worms in the mudflats of Saratoga Passage along Camano and Whidbey Islands, and in Possession Sound. The annual spring visit of gray whales provides an excellent opportunity to view them from the shorelines of Island and Snohomish counties, or from the Mukilteo/Clinton ferries, much to the delight of residents and visitors alike.

Orca Network’s Whale Sighting Network has followed the travels of these whales, as well as other whales in our region for decades, and since March 2014, our new Langley Whale Center has provided a great venue to learn more about the whales. The Whale Center is located at 115 Anthes in Langley on south Whidbey Island, one block up from “Whale Bell Park,” where the Whale Bell is rung whenever someone spots a whale in the area.

Orca Network provides a Whale Sighting Viewpoints Map to help watchers find the best locations for viewing whales from shore at our Langley Whale Center. To get the latest information on where the whales are, join and follow Orca Network’s Facebook page, where whale sightings are posted daily, along with news, events, and information about the whales of our region.

The Langley Whale Center also features displays and videos about gray whales, orcas, and the many other marine mammals of the Salish Sea. Cascadia Research has designed a new exhibit at the Langley Whale Center describing the gray whales in Puget Sound. Also on display are marine mammal skeletal and specimen displays collected and prepared by Orca Network’s Central Puget Sound Marine Mammal Stranding Network, to help visitors understand the anatomy and natural history of the marine mammals who share our island waters.

On Saturday and Sunday, April 8-9, don’t miss the annual “Welcome the Whales Parade and Festival” in Langley to honor and celebrate the arrival of gray whales to Whidbey Island. Welcome the Whales Festival is sponsored by the Orca Network and Langley Chamber of Commerce.

Saturday, April 8, will include hands-on educational displays, costume-making, and children’s activities, followed by the Whale and Critter Parade in downtown Langley, ending at the Waterfront “Whale Bell” Park with a blessing for the whales, music, and celebration on the beach, while watching for gray whales in Saratoga Passage. The Langley Whale Center will be open from 11 a.m. to 5 p.m., with special activities and displays about gray whales and staffed by Orca Network/Whale Center docents.

In the afternoon, presentations will include our featured speaker Joel Reynolds, western director and senior attorney for the Natural Resources Defense Council, who has led several of NRDC’s largest campaigns, including campaigns to protect the gray whale birthing lagoon and World Heritage Site at Laguna San Ignacio in Baja California. Mr. Reynolds’ legal challenges and negotiations with the Navy to protect whales and dolphins are described in the book “War of the Whales” by Joshua Horwitz.

Sunday, April 9, browse the Langley Whale Center’s exhibits, displays, and gift shop from 11 a.m. to 5 p.m., and in the afternoon, from 3 to 5 p.m., take to the water to see the gray whales on the Orca Network’s gray whale fundraising cruise aboard the Mystic Sea whale watch boat.

For more information about Welcome the Whales weekend or the Orca Network’s Whale Sighting Network, visit our website.