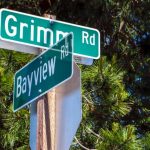 The afternoon sun shone brightly on the walls of historic Bayview Hall, and on the baseball cap that read “Cool Bayview Nights Car Show.” In the shadow of the hat’s bill, thoughtful, smiling eyes looked to the white structure that still stands since its 1928 opening. “My grandfather helped build that,” he says, “And he used to show movies in there too.”

Bayview Hall was built with the help of Brian Grimm’s grandfather. (Photo by Shawn Berit)

Whidbey Island history runs deep in Brian Grimm, as it does for many families here. The evidence rests in the island’s back roads. Throughout South Whidbey, you can cross and drive down roads with names like Campbell, Porter, Clyde, and yes, Grimm.  His uncle settled on the island in 1912 and “My grandfather moved to the island in 1914,” Grimm says.

Grimm was in first grade with many kids from families that had streets named after them. From a young age, he found that fascinating. Memories of his youth included driving the roads and back roads with friends and family. He talks of teenage antics with a grin and glint in his eyes. Yet Grimm’s true appreciation of the roads would come later in life.

In 2009, as president of Bayview Hall, he started a research project built on determining just who owns the hall and also who helped found it. Recalling his childhood friends, he realized that the deepest roots on the island are reflected in the names of its roads. As families moved to the island to homestead, they applied to the county to have their names used to identify the roads they lived on. “Roads” predate lanes, circles, or drives, and thus the names followed by “road” have their origins in the island’s oldest families. This fact gave Grimm his starting point.

As Grimm contacted local families and learned their histories, it also gave him the chance to get to know his neighbors better. His sense of community, and love of the people here, only grew with his research. He experienced another enjoyable benefit, he says: He got to know his dad and grandfather through the eyes of others.

Yet, in the midst of his research, a tragic event brought his work to a halt. On a cold November 11, 2011, a Chevy Malibu was headed south on Wilkinson Road just a mile south of Langley. The driver, who had been drinking, and her three passengers had left a house party together. Around midnight, the driver lost control and ran into a tree. Bystanders at the scene were able to pull her from the car, but as it went up in flames, the three young men inside could not be saved.

These were people Grimm knew. The huge loss to the community, to his friends, family, and neighbors, gave Grimm a new mission. He became president of Island County Mothers Against Drunk Drivers. Then, just as his grandfather helped found Bayview Hall for the community, Brian founded the Safe Ride Home program.

Preventing a recurrence of the tragedy that took place that November night became Grimm’s passion. The Safe Ride Home program is simple. Residents of South Whidbey who feel threatened or unsafe getting into a car, as either a passenger or driver, can call the Safe Ride Home phone number and get a free ride home. The number is (360) 395-8714.

As with any nonprofit group, funding is a concern. Grimm started with car washes as fundraisers, but in time, he created the Cool Bayview Nights car show. Car entry fees from the show benefit Safe Ride Home and other nonprofits such as Good Cheer. This year, visitors will be asked to donate a can of food for the food bank as an entry donation. The show will take place at the Island Country Fair Grounds in Langley on July 8 from 11 a.m. to 3 p.m.

History caught up to Brian Grimm again, however. In 2016, he partnered with the Island County Historical Society to revive the Back Roads Community Potlucks. He was happy to return to the story of Whidbey Island. He says Whidbey’s history is like a good book that you just want to keep picking up again.

The origin of Clyde Road will be discussed at the July potluck as well. (Photo by Shawn Berit)

The potlucks started up again in January, with the next one coming up on July 30 at 2 p.m. at Bayview Community Hall. It is truly a community potluck: everyone is welcome and encouraged to bring a dish of their choice. The July gathering explores the history of Grimm Road and Clyde Road.

Reflecting on years of pouring himself into the community, Grimm took off his hat to show the initials embroidered on the back: D.G.T. “It means do good things,” he says, “My goal in life is to make things right.”

Seems like the back roads of Whidbey Island was the perfect place to start.