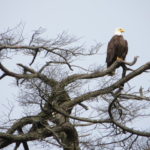 Guardian Trees: Ragged Remnants of the Great Coastal Forests that Used to Be

We can time-travel here on Whidbey Island. A visit to the guardian trees, which protect our coastal old-growth woods, becomes a walk with elders who are hundreds of years old.

Guardian trees form a barrier line to defend their brothers and sisters behind them. Grizzled veterans that bear the brunt of wind, saltwater, sun, rain and snow, these trees become gnarled and sculpted over the many seasons during which they stand guard. Walking through a forest of these old giants along Ebey’s Bluff trail or in the Admiralty Inlet Preserve in Coupeville, one can imagine being a hobbit walking in the Fangorn Forest of “Lord of the Rings.” The trees have a supernatural quality about them.

Twisted guardian trees protect their forest brethren behind them.  (photo by Jamie Whitaker)

“The branches of the old-growth Douglas fir trees twist and turn making their way under and around each other,” Whidbey Camano Land Trust’s website notes. “At over four feet in diameter and 250 years old, you can tell these trees have weathered many coastal storms.”

Admiralty Inlet Preserve was bought three years ago for $3.3 million by the Land Trust (WCLT) from Seattle Pacific University. The 46-acre site was once considered for expansion by the university, which proposed building additional cabins for its retreats. However, following a campaign waged by the Whidbey Environmental Action Network for protection of the heritage forest, the school eventually sold its holdings and used the proceeds to upgrade its existing Camp Casey facilities. An endangered plant, the yellow Indian Paintbrush grows in the Naas Prairie, adjacent to the preserve.

While the west coast of Coupeville hosts spectacular guardian trees along its bluffs, there are other stands of the old trees as well.

“They are everywhere,” said Whidbey environmental consultant Elliott Menashe. “Scatchet Head, Possession Point and Double Bluff on the south end, at West Beach, throughout North Whidbey, Deception Pass, Fidalgo Island, Lummi Island, the San Juans, the Strait of Juan de Fuca—anywhere there are strong prevailing winds and [adjacency to] fetch. The ones at Ebey’s are the best and most classically developed forms because the forest is largely intact. Mostly all we have left, any more, are ragged remnants of the great coastal barrier forests that used to be.”

The trees that used to be. Once upon a time, between 7,000 to 10,000 years ago, Douglas firs were giants that grew in abundance on Whidbey Island, with a height of 245 to 330 feet and diameters of five to seven feet. With the European discovery of Whidbey Island in the 1790s, early sailors remarked on the lush forests Black bear, wolves and red fox once lived in the great forests, but were later hunted to extinction. When Europeans began arriving to homestead land in the 1860s, the old trees were logged and have not achieved the same size since.

In our current times, Menashe noted, it pays to be mindful about maintaining guardian trees on private property.

“It’s important for people who ‘live on the edge’ to be aware of the importance of these trees,” he added. “Folks who build their permanent homes in temporary locations like Puget Sound shorelines need to pay more attention to their management practices. It’s unfortunate that many landowners, in their efforts to ‘improve’ their views, unwittingly damage their shore land by removing these unique and beneficial trees.”

Local hikers at Admiralty Inlet Preserve said they were heartened that the trees were preserved for the public to enjoy and admire for all time.

“I call them Grandpa trees,” said Kathy Sivertsen, while stopping to chat on a walk with the neighbor’s Golden Retriever, Sandy.

Coupeville resident Yvonne Guida was struck by the power the trees had on her, “I had the feeling that these trees were saying, ‘Welcome to our home, the forest, and we surround you with love and light.’ These trees gave me a strong sense of feeling rooted and connected to the earth…a great feeling of peace and tranquility.”

The trees of Ebey’s Bluff and Admiralty Inlet Preserve are part of Ebey’s Landing Natural Historical Reserve, comprising nearly 20,000 acres. The reserve is an active farming community that operates in a partnership between the town of Coupeville, Island County, Washington State Parks and the National Park Service.

Kate Poss recently retired from her job as a library assistant at the Langley Library. She was thrilled to work for three summers as a chef aboard a small Alaskan tour boat from 2008 to 2010. She was a newspaper reporter in Los Angeles for many years before moving to Whidbey Island where she likes ‘talking story,’ hiking, hosting salons and writing her novel.