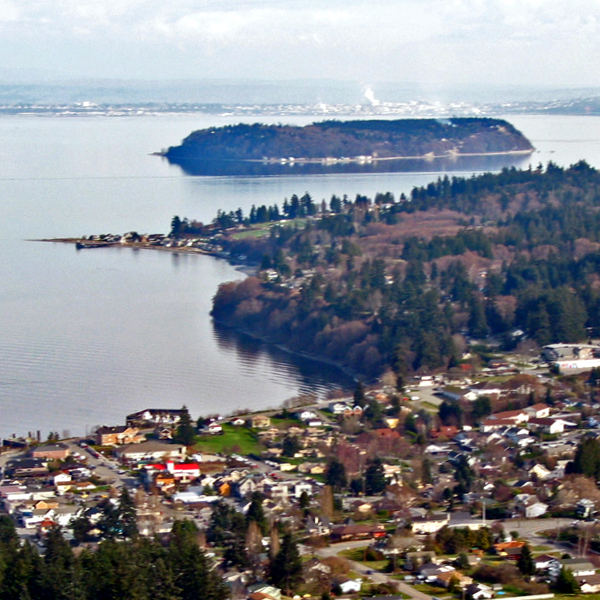 Hat Island, the Slave Trade, and the U.S. Supreme Court

Hat Island with Langley in the foreground and Everett behind. (Photo by John Scurlock)

As the glacier receded from Puget Sound, and the water level rose, a small deposit of material became separated from what is currently Camano Island. The earliest visitors to this little island were Native Americans, who called it (CHUH-CHUH-SUL-LAY), “the place where little one lived.”

In 1792, a British expedition under Captain George Vancouver mapped the region. His ships anchored off present day Mukilteo for a time, and although the little island, which is about 440 square acres in size, appears on the maps of the expedition, Vancouver did not name it.

A portion of a 1798 chart from the Vancouver expedition showing the as-yet unnamed island. (Photo courtesy of Library of Congress, Geography and Map Division)

Forty-one years later, an American expedition commanded by Lt. Charles Wilkes entered Puget Sound. Like Vancouver before him, Wilkes anchored off Mukilteo, but unlike Vancouver, he named the little island “Gedney Island” after Thomas Gedney, a young naval officer and acquaintance of Wilkes.

Born in 1799 in South Carolina, Gedney became an accomplished surveyor and did surveying work along the East Coast. He gained notoriety in 1835 when he helped subdue a would-be assassin of President Andrew Jackson on the steps of the U.S. Capitol.

On August 26, 1839, Gedney, who commanded the USS Washington, a coastal survey ship, encountered the ship La Amistad, which was anchored off Long Island. Aboard were a number of Africans and two Spanish crew members. Upon learning that the Africans had killed the ship’s captain and cook off Cuba, Gedney seized the ship and towed it to New Haven, Connecticut.

The Africans were some of the hundreds brought from Sierra Leone to Havana, Cuba, by Portuguese slave traders. Fifty-three of them were purchased by two Spanish slavers and placed aboard La Amistad for transport to the plantations of their purchasers.

When the ship’s cook intimated they might be eaten, the slaves revolted. They killed the cook and captain. The slaves ordered the two Spanish slave traders to sail the ship back to Africa, despite their injuries.

The Spaniards attempted to deceive their captors by sailing back and forth on an erratic course up the east coast of the United States, hoping to be rescued by British anti-slave-trade patrol vessels.

Map showing journey of the Africans from their capture in Sierra Leone to imprisonment in New Haven.

They sailed east during the day but turned west at night. Sixty days after leaving the Caribbean, La Amistad anchored off Montauk Point at the tip of Long Island, New York. Several Africans went ashore to barter for food and drinking water, which is when they were discovered. In addition to the slaves, the ship’s cargo included wine, saddles, gold, and silk. Gedney, his crew, and two others claimed salvage rights, knowing that such a prize would provide them a comfortable life.

President Martin Van Buren wanted the Africans to be tried for mutiny. The Africans were imprisoned and a motion to try them for murder was made.

A group of abolitionists led by Lewis Tappen took up the cause to publicize the horrors of slavery and the slave trade. A district judge ruled the Africans were free men and were not subject to Gedney’s salvage claim. He ordered the U.S. government to return them to their home in Africa.

The decision was upheld by the Circuit Court, but the United States attorney appealed the decision, and the case was heard by the U.S. Supreme Court. Abolitionist and former president John Quincy Adams argued that the Africans were illegally enslaved.

In January, 1841, the Supreme Court ruled in favor of the Africans, finding that they were not Spanish citizens and were taken illegally from their home. The surviving Africans were eventually returned to Africa.

The case was a key win for the abolitionists and played a role in the furor regarding slavery leading up to the Civil War. For the first and only time in history, Africans seized by slave dealers and brought to the New World won their freedom in American courts and returned home.

Gedney Island became part of Snohomish County in 1861. Perhaps because of Gedney’s role in the affair, the Island bearing his name came to be called Hat Island. Although the origin of that name is uncertain, the name stuck, and both names appear on maps of Puget Sound.

To learn more about the history of the naming of Gedney/Hat Island, come hear a presentation by Peter Van Giesen from 7 to 9 p.m. on June 24, 2017 in the Fellowship Hall of the Langley United Methodist Church, Third and Anthes Avenue.

Robert Waterman is past president of the Whidbey Historical Society and co-author with Frances Wood of the book “Langley.” He lives in Langley with his wife Anne.