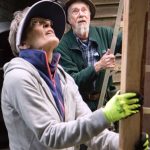 Ahren Bader Jarvis drove up from downtown Seattle with his girlfriend Mary Pat Murphy to volunteer for the day. Hearts and Hammers helped him when he was a boy, living on Whidbey Island with his brother and single mom years ago. “Hearts and Hammers came to our house and helped us,” he says. “Now it comes full circle.”

Ahren Bader Jarvis and his girlfriend came from Seattle to volunteer. His mom received help from Hearts and Hammers when he was a boy, and he wanted to give back. (Photo by David Welton)

Seattle resident Beryl Fernandes learned about Hearts and Hammers last February, after attending a Thriving Communities conference at the Whidbey Institute. “I’m originally from Zanzibar, and we had this kind of community, which I miss living in Seattle,” she says. “I would love to see this model replicated.”

Hearts and Hammers began as a simple notion. Noticing that some women of her church needed help with house repair and gardening, Lynn Willeford, a self-described “serial starter-upper,” organized people to gather and help their neighbors. With initial sponsorship by the Langley United Methodist Church, Hearts and Hammers began as a pilot program in 1994 to help repair and rehabilitate homes for those who were either unable or couldn’t afford to do the work alone. The group is now a 501(c)3 nonprofit.

“It doesn’t take a whole lot of time or trouble to make someone happy,” Willeford says.

Organized like a military unit, including military titles, this year’s event was headed by a new “general,” Matthew Swett, who runs Taproot Architects.

“We share the load — that’s the benefit of a team,” Swett said at the morning breakfast where volunteers gathered with their captains in the cafeteria of South Whidbey High School. A crowd of about 330 gathered to help out at 35 homes.

Joining the army of volunteers was Helen Price Johnson, an Island County commissioner. “We’ll be doing siding on a house,” she said. “I’ve been doing this every year. It helps to have a contractor (Dave Johnson) as a husband. This is a tremendous event.”

By 8:15 a.m., participants gathered outside for a group photo by David Welton before heading off to their assignments. Welton has photographed Hearts and Hammers for the past five years and now leads a team of photographers who help him document the day.

About 330 volunteers helped with home repair and gardening for the 24th annual Hearts and Hammers work day. (Photo by David Welton)

“By the time I get there, residents are so in love with their crew,” Welton says, describing the alchemy between those who give and those who receive. “The community is like a quilt involving different personalities stitched together by love and respect.”

I joined Welton for the day, which was filled with meeting people who volunteered their time and those who received much-needed help.

Our first stop was in Freeland to meet Mary and Clarence Conkey, a couple that has been married 60 years. Their garden reflected Clarence’s artwork with handmade stepping stones, birdhouses, and whimsical mermaids. Mary is 87, Clarence is 92, and Mary says she doesn’t want Clarence up on ladders to trim the trees and bushes anymore. So a crew from Hearts and Hammers comes to the Conkey’s half-acre property, which overlooks Holmes Harbor, equipped with pruners and clippers.

“We love these people,” says Claudia Cox, team captain for the Conkey’s garden. “We’ve been coming here for four years.”

Mary Conkey leads a Hearts and Hammers volunteer over hand-made stepping stones made by her husband Clarence. (Photo by David Welton)

Next was a visit to a log cabin in Freeland. Hearts and Hammers volunteers planned to make structural repairs for Margaret Schultz, a retired Metro bus driver from Seattle.

“What we’re doing here is repairing the second story deck, replacing joists,” said team captain Dave King, who was overseeing a team of eight volunteers. “Inside we’re strengthening the upstairs railing and installing a grab bar in the bathroom.”

Schultz says it’s hard for her to get around these days. Though she has new hips and knees, which work fine, her foot doesn’t work so well.

“A neighbor told me about Hearts and Hammers,” she said, while sitting downstairs with her feisty black cat Riley. “I’ve volunteered in the past and wound up needing help.”

Our next stop was a quick visit to the “Woodchucks,” at Mary Jane and Kevin Lungren’s home overlooking Holmes Harbor.

“We do wood chucking every year at Kevin’s,” says Harriet O’Neal, who has volunteered the past 10 years for this post. They’ll deliver split wood to eight neighbors who need wood to heat their homes during this cool and wet spring season. The wood ministry at Trinity Lutheran Church donates much of the wood.

John Welsch is one of the hard-working woodchucks who helped load pickups for delivery of firewood. (Photo by David Welton)

At the home of Gayle Six and her brother Gary Dronen, a Hearts and Hammers team planned to install a ramp using a railing salvaged from home repairs in the past. Dronen suffered a heart attack last October and needs assistance getting around.

“We thought having a ramp would make it easier for Gary to get in and out,” says Six, her dog Bandit at her feet. “My daughter has MS and uses a walker. Hearts and Hammers is doing a great job. Last year, they put in railings for our stairs and in the bathroom.”

Bandit inspects the work while his owner Gayle says how much she appreciates Hearts and Hammers. (Photo by David Welton)

Our next stop was Leonard and Linda Good’s hand-built home. Linda is a renowned strings teacher to hundreds of island students. Leonard, a retired and beloved science teacher, resisted getting help in repairing a leaky roof until his friends persuaded him to let Hearts and Hammers help.

“I asked the roofer to give Hearts and Hammers a slight break in the cost,” said Larry Rohan, “colonel” for the Good’s reparation team. “He said he’ll do it for free. That’s unheard of. It’s like me (a builder) giving someone free kitchen cabinets. This (Hearts and Hammers) is the best thing! I’ve been doing it for 20 years.”

While Bill Taylor, of Freeland’s AB Custom Roofing, and his crew were busy tearing off old roofing material, Leonard sat on the bed of a pickup truck to rest. “We needed a roof — our utility room rug was soaking wet, and there were two rotten places on the roof,” he said. “I’m flabbergasted by this show of kindness. Lynn Willeford started all this. She’s living proof that one woman can change the world.”

Jim and Jo Shelver, long known and loved for their volunteer work at the Whidbey Institute, Whidbey Island Center for the Arts, South Whidbey Commons, and Hearts and Hammers, also found themselves on the receiving end this year as a crew of friends made repairs at their Langley home.

“This is the first year we’re getting the full treatment,” says Jo. “I’ve been involved with Hearts and Hammers for years, working in the kitchen. I feel so blessed to be in a community like this. I never expected it would be us that needed help because we were always on top of home repairs. But we needed the help now.”

Jim Scullin captained the team at the Shelvers’ home. “We’re putting in a wheelchair ramp, railings, a concrete sidewalk, and doing some garden mulching,” Scullin said, taking a break for lunch provided by volunteers on the Shelvers’ front porch. “The Shelvers are huge service contributors.”

Jo Shelver and “captain” Jim Scullin take a break while building ramps, laying concrete, and gardening. The Shelvers are beloved community volunteers who received repairs to their home. (Photo by David Welton)

As the day came to a close, members of the Open Circle Singers stood outside the front door of the high school, welcoming volunteers and homeowners as they returned for dinner. Faces reflected smiles of contentment for meaningful work done and received.

“I’m still up in heaven about this,” Leonard Good beamed as he walked in the door with Linda.

Year after year, Hearts and Hammers makes possible the synergy of neighbors helping neighbors, proving that there is far more power in unity than any of us can harness alone.

The Open Circle Singers welcome hungry volunteers and homeowners back to the high school for dinner. (Photo by David Welton)

Peggy Rasmussen holds a support to shore up a balcony at Margaret Schultz’s cabin. (Photo by David Welton)

Lynn Willeford, whose idea for helping women get help with home repair grew into Hearts and Hammers, helps out at the Six and Dronen home to install a railing. (Photo by David Welton)

Open Circle Singers welcome volunteers and recipients back to the high school. (Photo by David Welton)

Linda Good thanks Hearts and Hammers for its repair and cleanup of the home that she and Leonard have lived in for more than 50 years. (Photo by David Welton)

Sarah Hess bids for a wheelbarrow load of firewood and a bottle of sparkling apple cider at the Hearts and Hammers dinner. (Photo by David Welton)

Lynn Willeford receives a bouquet in thanks for founding Hearts and Hammers 24 years ago. (Photo by David Welton)

Dez Rock, owner of Useless Bay Coffee Company, prepares food in the kitchen for a dinner thanking the volunteers. (Photo by David Welton)

Kate Poss worked as a library assistant at the Langley Library until last June when she retired. She worked for three summers as a chef aboard a small Alaskan tour boat from 2008 to 2010. She was a newspaper reporter in Los Angeles for many years before moving to Whidbey Island, where she likes cooking for new and old friends, hiking, reading great fiction, and writing her second novel with her friend Fred Bixby.

David Welton is a retired physician who has been a staff photographer for Whidbey Life Magazine since its early days.  His work has also appeared in museums, art galleries, newspapers, regional and national magazines, books, nonprofit publicity, and on the back of the Whidbey Sea-Tac shuttle!