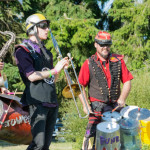 Nine brass bands from around the U.S., plus one from Perth, Australia, gathered on that afternoon to play at two stages at Greenbank Farm during the “HONK! Fest West Coast Tour: International Brass Band Madness!” global music exchange and picnic that followed an entire weekend of Seattle’s HONK! Fest West.

sambAmore band from Arcata, CA included a retinue of dancers.

Bands included Junkadelic Brass Band from Perth, the New Creations Brass Band from New Orleans, Environmental Encroachment from Chicago and the Extraordinary Rendition Band from Providence, R.I. Several bands ventured over from Seattle, while areas of California, Texas and Minnesota were also represented. Although all the ensembles are considered “brass bands” and were only a small representation of the number of bands who performed in Seattle, the styles of music they played varied from Dixieland to blues to jazz and samba, and no two were alike. Perth’s “Junkadelic” even included an electric guitarist and a rap singer.

Ken, (right) with the Junkadelic Brass Band (Perth, Australia) plays drums hand-made from “junk.” The band makes many (but clearly not all) of their instruments from” junk.”

The exuberance of the Brass Messengers, from Minneapolis, encouraged this little girl to join in the fun.

Following four hours of non-stop performances, all band members merged together near the Tractor Barn, forming one huge processional; then they meandered together, as the sun set—up the trails and into the hills to the ridge top viewpoint, all the while improvising on old blues favorites.

It was surely a different experience from their weekend parades in Seattle.

Clark-Stern leads the way into the hills as the bands close out the day’s festivities.

The massed bands reach the ridge top viewpoint as the sun slips below. (photo by Judy Feldman)