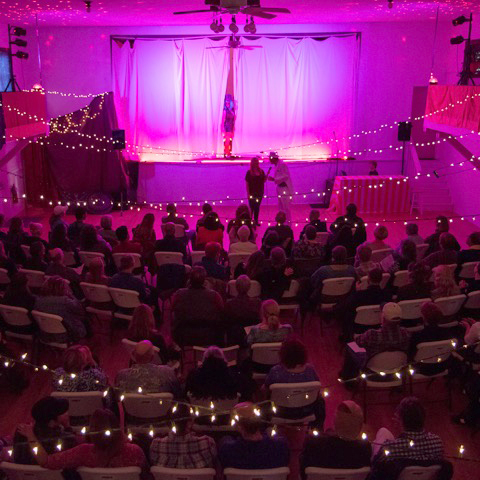 In Their Own Words: Burlesque Performers Tell Tales of Transformation

“To me the entire process of getting ready for a show is for that moment on stage,
no matter how long or short it may be. And it’s worth it every time.”
— Mallory Langer, Burlesque Teacher

On Friday, June 24, the Wild Island Performers graced the stage at Bayview Hall in Langley, presenting a show in the fashion of an American Burlesque show from the 1920s. Langley Mayor and Master of Ceremonies Tim Callison guided the audience through acts ranging from strongman feats, belly dancing and even striptease.

“When it comes time to ‘put on face’ for a show, there’s a lot of excitement for me. It’s like putting on a pair of your favorite perfectly worn-in pants, or even a pair of overly loved comfy shoes. They are old and feel like, well, home.

Mallory Langer “puts on face” as she anticipates “show-time, go-time.”

I’ve been performing since I was a kid. Dance performances, talent shows and even sports, really. So when it comes time to get ready before a show, it’s a natural easy thing. It’s something old but new, oddly enough. I’m excited and the anticipation is grand! Nerves don’t really exist—not in the way you’d think. It’s more like this high of the body, where you feel that very moment you live in so keenly.

During this time and putting on face, I like to enjoy myself, put music on and interact with my fellow performers, getting everyone around me just as excited. Living in that moment and just being well—me—goofy, silly, very sassy and maybe even a little too loud at times.

But there’s no other moment like that moment before a show, when everything is so real, you can be you. And it’s great. It’s probably one of my favorite things about performing, if not the actual act of performing itself.

After stretching, warming up my body and putting on makeup and costumes, it’s show time…‘go time.’ That moment you’ve been working so hard for. Putting all your love and passion, sweat and tears, bruised and sore body, happiness and frustrations into. To show ‘the world’ what you’re made of.

Wow what a feeling!”    —Mallory Langer

“When I agreed to be Master of Ceremonies for the Wild Island Performers, I thought all I would have to do was introduce each act. Simple, right?

Then I sat down with Mallory and Siobhan to go over the running details and they kept adding minutes between the acts that I’d have to fill. It added up to more than half an hour of time that I’d have to tell jokes and/or perform stunts.

Well, I told every corny vaudeville joke I could find. Thank goodness for the internet. I came up with some filler skits as well.

The saving grace was that the performers themselves were so good that the audience quickly forgot my amateur efforts. I was amazed, myself, as we went through the dress rehearsal and then at the show—how good everyone was.

The night of the show the performers were very loose and were having fun getting prepared backstage. You could tell they were ready and that they loved being there.”    — Tim Callison

“When I start to apply my stage makeup, I feel an internal transformation taking place as well. It is the signal to me that I’m stepping out of my everyday life and into the magical moment of a performing dancer. At this stage, I’ve given my all—to physically and mentally prepare for the performance. Getting into costume is when I let go of all that’s come before and I embrace the joy of what I’m about to do. It helps that belly-dance costuming and makeup is so beautiful too; I can’t help but feel radiant once I’m in full costume!

Gwen Sipes prepares for her belly dance performance and said she feels radiant once she’s in full costume.

Getting ready with the Wild Island Performers was a great time, too. We all have very different acts and talents and we all got along really well. There was a strong feeling of ‘We’re all in this show together—so let’s make it a great one!’”    — Gwen Sipes

ROXIE RHOLL-HER
Steampunk Stagehand and Assistant to the Producer

Carol Wisman, as “Roxie,” said she found it liberating to be in costume, hiding her “somewhat shy persona” and freeing her to be as gregarious as she dared.

“Since I was in costume, the somewhat shy persona that is me was hidden, so I was free to be as gregarious as I dared. My biggest issue was to make sure I didn’t have any ‘costume malfunctions’ as that would have left me exposed in more ways than I care to think about. I have to admit, it was actually more fun for me to play a supportive role—helping set up, greeting people at the door, working the curtain and helping with prop changes. I’d enthusiastically do it again!”    — Carol Wisman

“It’s the costumes for me…

If I know a performance is coming I start putting a costume together in my head, way in advance—eventually gathering things together as I develop my character. For me that’s the most exciting part of preparing. It’s like planning a trip!

I can’t escape anxiety before a performance, but dressing in a costume gives me something to focus on. It puts me in the world of my character.

Siobhan Wright rehearses her fan dance before the show. “It’s the costumes for me,” she said. “The way the costume looks and feels puts me in performance mode.”

For example, belly-dance costumes are beautiful. The way they are built also serves a purpose. They accentuate the dancer’s specific hip movements. They camouflage the anatomy; that works to make the movements look effortless and amazing. They have to be built tough to withstand many rehearsals and performances.

The way the costume looks and feels puts me in performance mode, mentally and physically.

Her hyper-feminized appearance and accessories contrast with her beard and chauffeur hat, masculine symbols, forcing the audience to do a ‘double take’ and question gender roles.”     — Matt Hoar

“Shaking off the willies and not being nervous prior to and during a show is pretty easy for me. I’ve been performing in front of audiences of all sizes and types since I was about 16—10 years—not as an actor, but as a musician, so intrinsic stage fright has all but left me. What I’ve learned is that confidence on stage comes with confidence in what you do. The more practiced [I am] with a skill or routine, the less nervous I am on stage. I practice until it all becomes muscle memory.

Getting into character is the easy part. Being a right-brained individual, creativity is a natural part of my thought process. It’s a simple matter of putting myself in the mindset of another character and saying, ‘If I were Abraham Lincoln, how would I feel if I sat on a whoopie cushion?’ The thing to keep in mind is that, when on stage, everything needs to be exaggerated: movements, facial expressions, gestures, etc. in order to get the full affect.”      — Billy Piepenbrink

Piepenbrienk, dressed as Mad Matt the Strongman’s assistant, relaxes by hanging out with friends behind Bayview Hall.

Katie Woodzick has lived on Whidbey Island for the last nine years and is moving to Boulder, CO in August to begin Naropa University’s MFA in Contemporary Performance program.  “Katie Woodzick: The Farewell Concert” is Saturday, July 23 at Whidbey Children’s Theater. For more information, go to:  http://www.brownpapertickets.com/event/wlm/2569933.