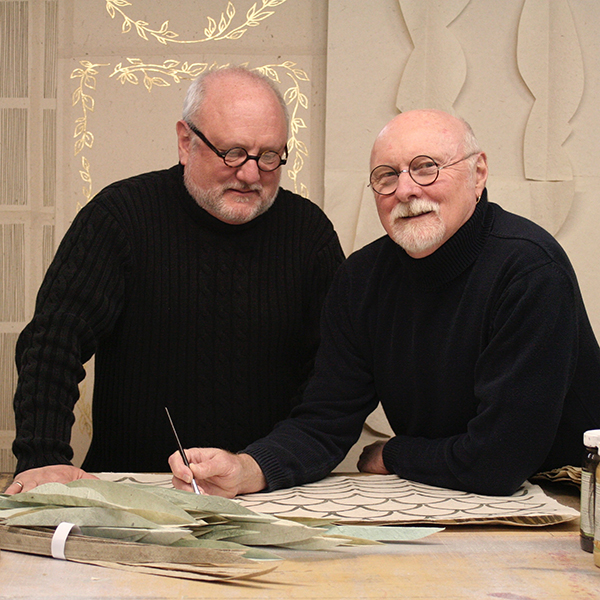 Who would believe that humble leaves from lotka and mulberry bushes would carry a pair of designers through good times and hard times. But the papers made of these simple materials have inspired a new design concept that has endured more than 25 years.

Richard Cannon and Richard Bullock (known as “the Richards”), owners of the Langley design firm Cannon/Bullock, discovered the quality paper quite by accident in the early 1990s. They were Los Angeles designers at that time, tasked with creating home interiors for clients who wanted a look of success in Los Angeles.

One day, however, a package arrived that would change the way they did business: it was a vase, wrapped in paper. The vase is long forgotten; it was the paper that spoke to them in a creative way.

The Richards relax after hand-finishing thousands of sheets of wall covering for Four Seasons Hotel last winter. / Photo by Cannon/Bullock

They investigated and found two sources for handmade sheets of cream-colored paper, measuring only 21 by 23 inches and 20 by 30 inches, and their wall-covering design business was born. Experimenting with pigments, textures, hand-drawn design and additions of beads and silk ribbon, the pair found success from natural paper wall coverings.

Lokta grows at the base of the Himalayas in Nepal. The shrub’s leaves are picked, pounded and rinsed in pure mountain water and left to bleach and dry in the high altitude sun. Women in the village of Baktapur, near Kathmandu, Nepal, have created this artisan paper for more than 700 years. It is a favorite paper of Tibetan monks for illuminated manuscripts and scrolls.

Mulberry trees grow throughout central China. The leaves and twigs that remain, following the annual silk cocoon harvest, are made into paper for the Richards by a collective of men who follow a 900-year-old recipe in a village that is supported by the Richards’ paper business.

Imagine traveling so far, from the humble simplicity of these plants to a Los Angeles studio—8,000 square feet of space with 14 employees, producing about 1,000 sheets a day and fulfilling orders in the design world for clients in North America and beyond. Imagine serving on interior design associations as board members and officers—nationally and internationally—fund-raising, continually producing new ‘products.’ Managing a staff. Payroll. The glamorous life of the “Rich and Famous.” Boom!

Literally. Sept. 11, 2001 and the World Trade Center’s Twin Towers crashed, bringing down not only the offices of investment companies, but also those of publisher giant Conde Naste and design firms as well. Orders dropped off precipitously.

“9/11 just about wiped the design industry out,” Bullock recalled, saying that he and Cannon happened to be in Manhattan during the attack, having just moved to Whidbey Island a week before. “When we returned [to L.A.], the fax machine spit out order cancellations. People wouldn’t travel. No one knew if the economy would crash. Hotels were 50 percent of our business. Money stopped flowing. Uncertainty was huge. We were affected like everyone else.”

“We had planned to phase out our L.A. office over the course of two years, but with 9/11 we had to expedite and create closure in six months’ time,” Cannon said of the pair’s decision to move their business to Langley and start over again. “When the economy finally picked up, there was a whole new cast of characters. Hotels had laid off their previous designers who had bought our products.”

On Whidbey Island it was back to bare bones, just the two Richards hand-tinting and illustrating each sheet to fill orders that arrived in the wake of 9/11.

“Sometimes catastrophes cause us to take a different path,” Bullock said. “We found that L.A. had become too distracting. A good distraction, though. We couldn’t say ‘no’ and we made a lot of contacts. In the design industry, as you grow, you’re pushed to grow more. We grew and we became bureaucrats. Coming to Whidbey, combined with the forced cutbacks in the economy, really required that we sit down and rethink what we wanted.”

Loyal clients continued to keep Cannon/Bullock afloat from 2001 to 2008.

Cannon said during that time they continued doing work in Las Vegas for hotels developed by Steve Wynn and his former wife Elaine. The Wynns are known for building luxury casinos and hotels such as the Golden Nugget, Mirage and Bellagio. Designers in Australia, New Zealand, England and Canada continued to place orders.

Business on Whidbey grew to the extent that Cannon and Bullock had again hired employees for marketing, tinting and design of the papers. Then shortly after Obama was elected on Nov. 3, 2008, the economy crashed. And businesses across the country faced economic uncertainty.

“We made a conscious decision to close our Langley studio in 2009,” Cannon said. “The major showrooms all went under.”

Faced again with just the two of them tinting and hand-drawing design on the papers, the Richards rented office space in an industrial building and once again found their creative inspiration.

“When I am painting I see things happening and get ideas I want to tinker with,” Bullock said, taking a break from hand-dying several thousand sheets of paper for a client’s apartment. “New lines developed.”

“Stepping back into the roots of our business, we realized immediately that, with no employees, we didn’t have to take on extra work to make the payroll,” Cannon said of the bittersweet decision to cut their staff. “We could live with less. It was a newfound stimulation to our creativity.”

The Richards were fortunate to have friends in high places in the design world who continued to buy the natural wall-coverings for their clients. These designers, the Richards say, use their papers as a design tool, to compliment interiors and create moods and textures. Some of their clients include actor Alan Arkin, singer Madonna, the Royal Family of Saudi Arabia and the late newscaster Peter Jennings, along with hotels such as Hyatt Regency, Hilton Hotels, Four Seasons and the Fairmont, among others.

“Our clients are designers in their 60s and 70s now, who have remained good friends. We’re tight. The design world is small,” Cannon said.

Although the majority of paper that is sold for clients is in the cream to beige range, the Richards do have clients who like color and texture that may look like stone or tortoise shell.

“This isn’t your grandma’s wallpaper,” Cannon said “There’s no single way for it to go up. It’s a design tool in the hands of a talented designer.”

Their collection has increased from seven to 34 design options in the past 15 years. The two “paper boys” add new collections every spring and fall. They also travel to Paris, Italy and New York to refresh their inspiration in the design world.

Currently the Richards say they are grateful for the orders on their desk and the thousands of papers to tint, texture and draw on before being shipped in boxes and bags to such far-flung places as Maui, Montreal, Aukland, Ireland, London and Australia.

Image at top:  Richard Bullock and Richard Cannon consult with each other over a paper design.  /  Photo by Dennis Zimmerman