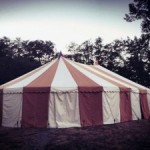 Island Shakespeare Festival’s “Much Ado About Nothing” is open

Step right up and get your Shakespeare under the big top!

Island Shakespeare Festival gets ready to kick off its fourth season with “Much Ado About Nothing,” opening at 5 p.m. Saturday, Aug. 3 and running through Sunday, Sept. 15. The company will perform the show in a custom-made circus tent that arrives this week, and which was made especially for the community theater by Armbruster Manufacturing Company of Springfield, Ill. “Henry” will be erected in a field behind Langley Middle School near downtown Langley.

This first season in its new digs is appropriate for director Rose Woods’ version of the play, which she has set with a Victorian era circus theme.

“I have always loved the circus,” Woods said. “I have wanted to run away with the circus since my earliest memories – quite especially the European circuses that toured throughout Europe in the 19th century, when the world still believed in magic and the improbable. Without the ability to time travel, running away to that era of circus was impossible other than through the magic and illusion of theatre. And so, my concept for ‘Much Ado About Nothing’ was born,” she added.

As the title of the play suggests, there’s a lot of brouhaha over nothing in this story, but Shakespeare still has plenty of witty fun along the way.  The basic plot concerns Claudio and Hero, who fall in love and plan to get married. But the villainous Don John slanders Hero with false evidence. The wedding is ruined and Hero faints. Her family eventually suspects slander and sets up their own con, pretending that Hero died from shock in order to reveal Don John’s evil plan. Claudio mourns Hero’s death, but of course, Hero is revealed to be alive and the marriage goes ahead as planned. In the play’s closing moments, it is reported that Don John has been captured for his crime. Meanwhile, during the course of all this, another love match is brewing between the feisty Beatrice and her mental boxing partner, Benedick, who are some of Shakespeare’s wittiest lovers and the couple who make the play so memorable. Shakespeare develops their relationship with exquisite timing, taking them from antagonism to sincere love and affection with excellent humor and a satisfying dose of compassion. Woods describes her take on the play in her program notes:

“Much Ado About Nothing” is perhaps one of Shakespeare’s most splendid explorations of love. Through the trials and tribulations of a quartet of lovers and those around them, we see love in all its absurdity and glory, in all its tragedy and stupidity. The plot is nearly perfect ─ combining high drama, great jokes and fabulous poetry in a dizzy sequence of scenes that leaves the audience torn between tears and laughter.

ISF’s tent, aka “Henry,” being hand-stiched by the artisans of Armbruster tent makers in Springfield, IL. Henry arrives in Langley this week. (Photo courtesy of Peggy Juve)

Launching this fourth season in a circus tent is not a small thing, Woods said, and she is inspired even more by the efforts of the community. The tent was acquired through a recent Kickstarter campaign, boosted by the generous support of a major donor, and will give the theater company the autonomy that comes with having a stage of its own for performances and as a training facility, and also to rent to the public for weddings and other events.

“I could not be more proud of this fearless and passionate company as we lift the flaps of our new home and invite you to step right up and enjoy “Much Ado About Nothing,” the director said.

Admission to Island Shakespeare Festival is free. Shows start at 5 p.m. on Fridays, Saturdays, and Sundays, Aug. 3 to Sept. 15.

The field is located behind Langley Middle School at 723 Camano Ave. next to the Whidbey Island Fairgrounds in Langley.