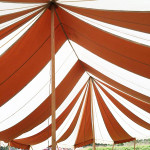 Island Shakespeare Festival: Raising a Circus Tent Without an Elephant

It was a scant five days before we were to open our show and tensions were high. We’d been rehearsing on an open field in blistering heat and we didn’t know how it would be to work in the tent. I remember the tent arriving in a large semi across the field and thinking, “What have I gotten myself into this time?”

Pounding the four-foot stakes deep into hard ground took the better part of the day and was back-breakingly hard. There were blistered hands, aching shoulders and shortened tempers. The ropes had to be a certain tension to withstand up to 90 mile an hour winds to comply with our permits and codes.

None of us had ever done this before and, I admit, I was nervous about the center poles. Traditionally, the old circus performers used their elephants to get the tall poles up and we didn’t have one. It took everyone pulling and pushing and we managed to get one pole up; however, even then, the whole thing came down at one point and we had to do it again.

Somehow, it all came together (it always does) and the show, “Much Ado About Nothing,” performed to full houses under the Big Top.

This year we were ready.

There was a wonderful moment when Rod Stewart brought out a magic tool that essentially pounded the stakes into the ground to the correct height. We all had a chance to push them into the ground (without blisters!) and it saved us hours!

After that, a few outer poles were put up to prepare for the two center poles. I think I held my breath while the center poles went up, but everyone worked together and soon they were both holding up the top!

Peggy Juve holds the tent up! (photo by Rose Woods)

It’s a balancing act, after that, to get all the outer poles up without the whole thing falling down again (a lesson learned last year). There were a few wobbly moments, but pretty soon the poles were in place and the ropes were tied to the stakes.

Henry’s Top Is Up!  (photo by Rose Woods)

Getting the Stage Put Down  (photo by Rose Woods)

After tightening the ropes equally around the entire thing, Henry was ready for walls. However, before the walls, the stage had to be put together. The next team of people hauled the stage in while the walls went up around them.

The atmosphere was fun with intermittent laughter dancing across the field.

Ready for Some Theatre Under the Big Top! (photo by Rose Woods)

When it was done, I think we were all a bit surprised that it went up in half the time! It takes a village (if one doesn’t have an elephant) to raise a circus tent and now we’re ready for our 2014 season to begin!

Image at top: Raising Henry  (all photos by Rose Woods)