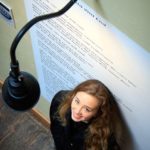 “No challenge poses a greater threat to future generations than climate change.” (President Barack Obama, 2015 State of the Union address.)

This is how our world will end.

When our black hearts do not care

That we leave black footprints

On the dark earth

When the whispering wind

And doesn’t carry the smell of pine forests or apple trees.

Earth Day: Friday, April 22, much of the world will celebrate the planet that is our home. Here on Whidbey Island, the Global Climate Change Art Contest debuts as yet one more facet in this worldwide effort to recognize the importance of maintaining a healthy environment for all life on Earth. This year’s contest gives a platform of expression to those most likely to suffer from negative effects of pollution and global warming: our youth.

Marian Myszkowski, Director of Programs for Goosefoot, which is supporting the Art Contest and hosting it at the Hub in the Cash Store in Bayview, said, “The Cash Store has had an Earth Day related art show for the past several years. This year the committee wanted to get high school students involved.” Enter youth development specialist Julie Glover and a small group of other community youth supporters and environmental activists, including Suzie Richards, Terra Anderson and author Ann Linnea who worked with Myszkowski and teachers at the three high schools on the island to bring the project to life.

Students were invited to submit works in both visual and performing arts in order to offer “the youth perspective on climate change.” Cash prizes from $25 to $100 will be awarded as well as a grand prize of $150 for the best overall work. Winners will be announced at noon on April 23 at Bayview Hall. The works have been on view at the Cash Store Hub since April 8 and will remain on display until May 30. They include student submissions from Oak Harbor High School, South Whidbey High School and South Whidbey Academy.

“These kids are amazing,” said Glover. “I’m excited about the idea of these kids getting together and connecting around a common theme and [helping] bridge the cultural divide. This gives them an opportunity to tell adults what their world view is, an opportunity to express themselves on an issue that will impact them the rest of their lives.”

Oak Harbor High School Art Instructor Jennifer Yates agreed that the theme of climate change has proven to be a powerful inspiration for her students and others: “Cody Fenton isn’t even a student of mine this year, and he came in for 15 minutes before school every day to work on his project,” she said. It’s a feat made even more impressive by the the fact that Fenton was working with a broken arm.

Fenton said, “I visited the Joshua Tree National Forest 3 years ago and saw the trees were slowly dying because of the heat. I started doing research about climate change and how it affects the Joshua trees. I got to thinking if it gets any warmer, then they are going to die. That made me more concerned about all trees drying up and dying. They provide oxygen for us.”

Fenton submitted a pair of brass earrings fashioned into the shape of the Joshua trees he admires. He appreciates that the contest also provides a way for people outside of school and family to see his work. “Now that I have something encouraging me,” he said, “I’m trying harder to get my piece noticed.”

South Whidbey High School junior Kari Hustad said, “I chose to enter because climate change is an important, often ignored reality that we are beginning to face. It’s crucial, and important to me, that we do everything we can to help people realize the implications of our current way of life. For me, poetry is the best way to deliver condensed emotions and a message like this, to really make someone feel something.”

Her poem, “This is the Way the World Will End,” delivers a rousing response to the dangers of climate change: “I wanted to express the incredible sadness and hopelessness of a future in a destroyed world,” she said. “I hope I can make someone feel the weight of what we are doing to ourselves and to the planet.”

South Whidbey High School junior Kari Hustad stands in front of her poem “This Is the Way the World Will End.” (Photo by David Welton)

Hustad’s sentiments echo off the walls in the Cash Store Hub in the works of the other young artists. Vienna Canright created a mixed media piece entitled “World of Waste.” She collected trash from Double Bluff Beach to make a map of the world. She formed continents from the junk she found on the beach: shredded plastic bags, bottle caps, rope fragments, metal objects. An accompanying hand-created document explains that every year, 14 billion tons of waste get dumped into the world’s oceans.

In another mixed media work, artist Madeline Barker paints water-colored Earth balloons attached to the tops of smokestacks in a photograph of a power plant. One of the Earth balloons is popping to pieces as another awaits a similar fate. An accompanying poem penned by Barker is titled “Big Blue Balloon” and provides support to the message in her visual art piece.

Many students submitted poems covering a gamut of emotions and observations related to the contest’s theme. In “Spring Is Here for Now,” Jing Wu draws upon the beauty of nature coming back to life after a long winter to contemplate the possibility that climate change could mean the end of Spring as we know it. Sama Bjork’s poem deplores our inaction: “We/talked about it./We/couldn’t decide./We/were too late.” But her poem ends with a certain hope that we can clean up the world and let it heal again.

Rohim Mikkelsen echoes that hope in his poem, “I Stood.” It tells the story of someone who responds to a call to action during a defining personal moment when a decision is made to stand up and do something, to make a difference. In another poem, “Planet B,” Katherine Read ponders the fate of human beings who foolishly pollute their world, pointing out that we have no other world to go to if we mess this one up.

Dansy Thomas, a South Whidbey High School senior who submitted a painting to the contest, said, “I believe that global warming affects everyone, especially the younger generations. If we continue on the path we’re on, for us it will be too late. I believe that my artwork promotes change, and I want my children and their children to live on a greener planet.”

For Julie Glover, providing an opportunity for youth to speak their mind on climate change is the first step in helping them cope with the world they will inherit from us. “How are you holding your head up as an elder if you’re not helping kids deal with the mess we’re leaving them?”

The second step would be to actually listen to them. They are speaking now. At the Cash Store.

Holden Sandal, a senior at South Whidbey High School, contributed to this article.