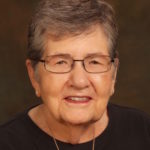 “Quilting,” Janet Steadman says, “is like eating potato chips. You can’t stop at just one.” Her career began in 1983 because of a new round bed that needed a cover. She loved fabric and sewing, so decided to learn to quilt a cover. After a few classes, she designed and made “Spiral Progression” for that bed in Texas.

“Sold Out,” permanent collection of U.S. Embassy for the Ivory Coast. (Photo by Roger Schreiber)

She definitely didn’t stop at making just one. Her quilts have won awards internationally and are part of collections throughout the U.S., Canada, Africa and Antarctica. A few months ago, that one delivered to the Palmer Station in Antarctica marked a giant milestone. Her quilts have now been shown on every continent on Earth.

While Steadman’s quilts make their homes in places around the world, she and her husband moved from Texas to settle on Whidbey in 1991. It was like returning to the island for her, as she had taught at Langley High School right after graduating from the University of Puget Sound. Over the years, her quilting community on Whidbey has developed significantly.

Part of that community includes Clinton quilter and dyer Liz Axford, who met Steadman in Houston, TX in l986 and later moved to Whidbey in 2008. Axford describes her friend as “a great teacher and a great student. She is always anxious to try something new, and easily laughs off any obstacles in her path as she perfects new ideas and techniques. I think she’s making the best work of her life right now.”

Axford, Steadman and 10 others who met through classes over the years, mostly with renowned quilter Nancy Crow, formed the group Fiber Optix, which still meets once a month.

Crow (www.nancycrow.com) describes Steadman as “a terrific example of an artist who has stayed focused these past 40 years, producing excellent work year after year well into her 80s. Her machine-pieced quilts have gotten better and better, changing, always staying interesting. She is a first rate colorist and a first rate craftsman, meticulous in all aspects of creating her very individual quilts. She has a distinctive and strong voice that is all her own.”

To one of the newer Fiber Optix members, Marcia Derse, a Freeland fabric designer, Steadman is an inspiration. Derse (www.marciaderse.com) pictures “Janet waking every day to work effortlessly in her studio, delighting in discoveries and bringing her careful eye and experience to her richly layered work.”

The public supports the praise for Steadman’s work. Her quilts have sold well online through Artful Home. Her work has also sold in several galleries, including Penn Cove Pottery Gallery here on Whidbey. Samples of her work can be seen at Janet Steadman.

David Walker, known internationally for his art quilts and photography, sums up the thoughts of many who have worked with Steadman: “For nearly 40 years, Janet has honed her career as a quilt artist and has produced a body of work that would appear daunting for the most of us yet causes us to ask the question, ‘Where does she find the time and energy to create so much quality art?’ Janet is passionate about everything in her life; she remains passionate about her art as well as all the other necessities of a good life lived. She knows much about balancing both time and energy. Janet’s color palette tells us much about her popularity; it is about warmth, the colors of the seasons and friendship. Janet inspires all of us to follow in her footsteps as an example of hard work, dedication and passion.”

One of Steadman’s favorite quilts, “I Love a Mystery,” graced the cover of the book “Art Quilts: A Celebration: 400 Stunning Contemporary Designs.” (Photo by Roger Schreiber)

Natalie Olsen, a weaver & writer, is also inspired by Janet, both as a friend and an artist.

Photo at the top: head shot of Janet Steadman (Photo by Michael Stadler)