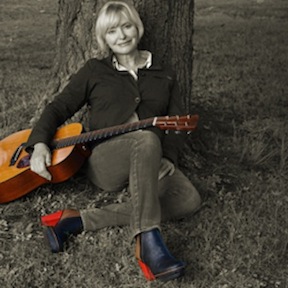 When Whidbey Island resident and singer songwriter Joann Quintana recently released her first CD, “Sometimes a Sinner,” she simultaneously reached double mileposts in her pursuit of two of her foremost passions: songwriting and starry nights. She can spend more time talking about the latter than the former, once she gets going.

The first song on the recording, “Dark, Dark, Dark,” is an ode to the disappearing darkness on our planet. A portion of album sales will go to the Dark Sky Association (DSA), which works to preserve the remaining dark areas on the earth where stars are still unobscured by ground light.

Her fascination with the dark night sky began on a trip to farm in southern Illinois, her home state. “We stopped the car, turned off the engine and stepped outside. It was completely black. I couldn’t see my hand in front of my face, like in a cave. Someone said, ‘Look up!’ Oh my gosh, the stars. It was breathtaking!”

A visit much later in life to Truckee, California in the Sierras, convinced her that cities and towns could enact laws that would protect the view of the night sky while keeping lighting where needed in inhabited areas. That’s how she eventually became involved with the DSA.

Quintana has loved music since childhood, but her songwriting talent remained hidden until later in life. That has resulted in a bittersweet emotion for the songwriter during her moment of personal triumph; her late father, Elwood S. Hamick, to whom the album is dedicated, did not live long enough to hear her original songs.

“My dad knew I loved music” Quintana said. ”He loved Hank Williams and Bill Monroe. But he never heard one of my original songs before he died. My sister and I sang a Hank Williams song at his funeral.”

She strayed from music for many years after that. “I didn’t play the guitar for years and years,” she said. “After awhile, there was this big hole in my life and I had to get back to music. In Seattle, I started taking guitar lessons and continued for several years. I also began playing music with other people.”

Then one day, the words to a song just popped into her head like they were falling from the sky.

“I was standing in my kitchen cooking,” she said. “I had read some article about how our names can influence us. I was daydreaming, thinking if you had a name and your name was your destiny. I imagined a woman with a hardscrabble existence. What would it be like for her? Then I thought of Iris Dement! I have always loved her name. I wondered if I was named Iris Dement, would I be a different person?”

The song that resulted is called “Named For a Flower” and is on Quintana’s new CD. With names such as Hank Williams, Bill Monroe and Iris Dement figuring prominently in her personal history, it is no surprise to learn what sort of sound to expect from this late-blooming singer songwriter.

“Sometimes a Sinner” falls well within the Americana genre of music, which is primarily a roots Country and Appalachian mountain-music inspired folk approach. However, eclecticism is a hallmark of the genre and many other forms of American music, or at least elements of it, sometimes fall under its wide umbrella. Quintana describes her sound as rootsy and bluesy “with hints of alt country, rockabilly and salsa.”

CD cover artwork of the angel from “Saint to Sinner”

The CD was recorded and produced at Empty Sea Studios in Seattle by Roots Channel founder Michael Thomas Connolly. Connolly sings and plays no less than ten different instruments on the recording and, as producer, is the person who conjured Quintana’s vision of her songs into reality.

“Being a singer-songwriter is hard because it’s like being an orchestra conductor who doesn’t have an orchestra,” she said.”I can hear what I want a song to sound like, but I’m not a multi-instrumentalist so I can’t produce the sound I want without quite a few other musicians. I would play and sing a song for Michael and explain [to him] what I wanted it to sound like. He would pick up one of his many instruments and say,’you mean like this?’ Gasp. ‘Yes!’”

The result is a recording that features rich, acoustic-based arrangements with some fine dobro and mandolin passages that adeptly support Quintana’s voice and vision of her songs. She said, “I can’t say enough good things about working with someone as talented as Michael. The authenticity of the sound of ‘Sometimes A Sinner’ is because of [him].”

Quintana’s voice teacher, Jana Szabo, also appears on the CD singing harmony on the track “Red Hot Planet.” Quintana gives Szabo credit for helping her develop her singing skills. “I am a better singer than I was two years ago,” she said. “Thanks to Jana’s instruction and my own hard work.”