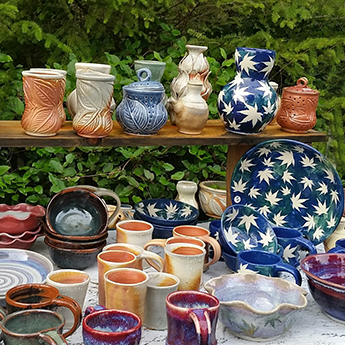 Jodi Cable, her Pottery and the Nun Who Believed in Her

If you’re driving through the tall woods along Campbell Road in Clinton these dark winter days, you’ll see a colorful mermaid beckoning you to stop and look at the pottery on display. Among the trees is an array of prolific and varied pottery pieces created by artist Jodi Cable.

A whimsical mermaid at 3915 Campbell Rd. invites visitors to stop by. / Photo by Kate Poss

“I learned how to throw pottery on a wheel in a convent,” said Cable, whose vibrant and whimsical bowls, plates, vases and pottery characters live in folks’ homes throughout the U.S. and beyond. “I was in high school then—a sophomore, I think—chubby, and I pinned my hair over my face so I could hide behind it. This nun, Sister Mary Burke, thought I might like working in pottery, so after school I threw pots on the convent’s wheel. I found that working with my hands was therapeutic.”

Fast-forward 30 years and we find a trim Cable living in Clinton, creating pieces that depict her trademark cobalt blue with white spirals or maple leaf motifs. She’s also known for her colorful sun and leaf-patterned items that seem inspired by a tropical climate.

There are vases depicting voluptuous women. Mermaids. Face jugs, inspired by African-American slave art. “These were [originally] made by slave potters as markers for graves since slaves weren’t allowed to have regular markers,” Cable explained. “The ugly faces were meant to scare off evil spirits.”

Exit your car and you may be greeted by Jojo—a small, wire-haired, salt-and-pepper-colored Party Poodle/Chihuahua mix whose tail spins like a propeller. Or Curly, the black Standard Poodle, may lope out and bark to announce your arrival. Or Asian the cat may swish by. Pottery characters, placed here and there, can be seen as you walk into the spacious backyard where an Anagama kiln has been built. Upon noticing it, one steps back into medieval times. Cable’s kiln is inspired by its Japanese ancestors that date back to the Fifth Century and can achieve heat up to 2500 degrees.

Cable uses this kiln once a year to fire her distinctive brown and speckled pottery.

Jodi Cable describes her Anagama kiln, whose design is based on a model dating back to 5th century, Japan. / Photo by Kate Poss

“These are dry pots; they go into the kiln with no glaze,” Cable explained, using one of her mugs as an example. Its raised-leaf design, with a Celadon-green glaze on one side and a reddish-brown on the other, has an earthy look.

“The wood ash glazes them,” she said. “Where the fire hits, you get the light green glaze and where the little speckles are is where the wood ash has dripped down. When you think about loading the kiln, you think of where the flame hits. One piece can be placed in front of another for a shadow effect. Each piece comes out unique.”

Once a year, Cable invites fellow artists to fire their pieces along with hers.

Celadon-colored glaze is created by the nearly 2400° heat in the Anagama kiln. / Photo by Kate Poss

“Part of the fun is my firing crew,” Cable said. “Sharon Warwick is an amazing person. She runs the Bayview Farmer’s Market. My other gal is Jennifer Yates, who teaches art at Oak Harbor High School. She is the most fun girl in the world. Sometimes she brings her students with her.” While standing before the Anagama’s oven, Cable points out the kiln gods that Yates’ students created to watch over the kiln. However, as interesting as the Anagama pieces and the oven that creates them are, it’s the shiny-glazed pieces fired in her studio kiln that are Cable’s bread and butter. Her art sells by word of mouth. She reminisced that while growing up in Oregon, her family wasn’t particularly artistic, though her brother “could draw anything from memory and was an amazing musician and could take apart radios.” Her grandfather, she said, was “an old German, who played accordion. That’s what they used to do in those days, play music and eat pickled whatever.”

After high school, Cable quit making pottery for a while and did odd jobs, including cooking and cleaning for elderly folks in their homes. “I learned more from them about life than I have in any other job I’ve done,” she said, “and that was to see how there are stages in life and that we have this limit of time to live it.”

Cable eventually earned a bachelor’s degree in art from Western Oregon University at the age of 26.

Cable’s husband is a friend she met while visiting her grandparents on Lopez Island as a child. Her grandma was “best friends” with Steve Cable’s grandma, who also had a cabin there. But as Jodi Cable grew older, she lost touch with her friend, who had moved to California. One day, while Jodi was sitting in her studio, she said a guy she didn’t recognize showed up. It was Steve.

They married and moved to Everett. Jodi’s reputation as an artist grew with her studio in Pioneer Square. “On ‘First Thursday’ sales we had a line out the door,” she recalled.

When Jodi was pregnant, the couple traveled to Whidbey Island where they visited the Holiday Workshop, an annual event hosted by the Whidbey Island Waldorf School. She knew then that she wanted to move to the island and have her child attend the Waldorf School. The couple found a home nearly across the street from the school in the woods and their son Cole was enrolled and attended the school. He’s now majoring in Education at Western Washington University.

These days, Cable teaches ceramics to students attending the Whidbey Island Academy (WIA). She speaks passionately about the need for art in students’ lives and how it helps enrich their academic pursuits. “We have world-class artists here on the island and, yet, students at the high school in Langley barely have enough resources,” she said. Cable then recalled Sue Wolf, a beloved WIA teacher, who passed away. To preserve the memory of all Wolf did for WIA, students working with Cable created a ceramic bench covered in butterflies. “Our teachers deserve so much,” Cable said.

With the holidays, here, Cable’s reasonably priced pottery may fill the need for a unique gift from the island; stop by and browse any day at 3915 Campbell Road in Clinton. Cable can be reached by phone at 360-341-2019 or email: woodkiln@whidbeyisland.net.