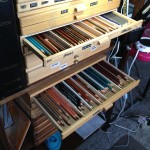 People are stunned when they see John Ursillo’s colored pencil works. “My CP art is based upon old master’s techniques,” he said. “I have drawn my life-long inspiration from Norman Rockwell for his love of realism, and Andrew Wyeth for his appreciation for different ways of looking at things.”

Ursillo in his studio next to samples of his artwork. (photo by Carolyn Tamler)

When he was just 11 years old, Ursillo’s mother invited him to take lessons in whatever he wanted. He chose art, took three years of private instruction and, afterward, continued expanding his skills. He started with charcoal and graphite, graduated to pastels, then water colors and oils.

Eventually he transitioned to acrylics, which remained his medium, along with oils, for many years. In the mid-1980s, John discovered colored pencils. “I experimented with them and grew to like them,” he said. “There were very few books on colored pencil (CP) art at the time, so I had to learn mostly on my own.”

Ursillo said he is someone who needs to use the left and right sides of his brain equally. So it makes perfect sense that he received a degree in Chemical Engineering, worked 40 years as a recognized expert on chemical weapons disposal AND became known as an artist. Although he moved around the country with the Army and his career, he finally settled in Santa Clarita, California for 25 years, working as a chemical engineer. “I compartmentalized my life. Work stayed at work,” he added.

He sees his art as a way of leaving a legacy of his life experience: “All of my art is drawn from my own life experience,” he said. “There is no fantasy in what I create.

His chemical engineering job was a high-responsibility, high-stress position and he realized, when he was in his late 50s, that he needed to get out. His wife, Maria, had visited Whidbey Island in 2002 and told him about the peaceful environment she experienced here. He came north with her for a visit a year later, and the two decided this is where they wanted to live.

They made their move to the island in 2009 to their home on 4-1/2 acres in Clinton. “I grew up in an Italian tenement neighborhood in Lawrence, Massachusetts—a mill town,” Ursillo said. “I always wanted to live someplace where there were trees and lots of open spaces. Whidbey has been just what I was looking for my whole life.”

Ursillo working over his desk in his studio. (photo by Carolyn Tamler)

Whidbey Island provided Ursillo with his first real studio. He works on his art table next to a window that provides a breathtaking view of the Sound and the Cascades. He is assisted by his studio cat, Loki, and Indie, a black Havanese dog that “likes to dress up” (with the help of Ursillo’s wife).

Ursillo joined the Colored Pencil Society of America when the organization was founded in 1990, and, he noted, there was, at that time, an “increasing status of the professionalism of the medium.”

Today, he works on paper, canvas and board and most of his artwork is colored pencil with an occasional oil “to loosen up.” The non-paper pieces are finished with a clear coat of spray acrylic (UV protective), while the work done on paper has to be under glass.

In 2007 Ursillo developed a technique he calls “Solvent Enhancement” that allows colored pencil to be used with an amazing level of saturated color and realism in details and textures.

Ursillo has been an art teacher for more than 30 years and continues to offer workshops and private lessons. He is a featured artist in Whidbey Life Magazine’s Virtual Gallery for February. See that show here.

On Whidbey, his work is shown at Artworks Gallery at Greenbank Farm. He will also have an exhibit of his colored pencil and oils at The Chiropractic Zone in Bayview for two months, with an opening reception scheduled for mid-March.

You can learn more about John Ursillo and see examples of his work on his website: www.bearcubstudio.com.

Photo a the top: Drawers of colored pencils in Ursillo’s studio (photo by Carolyn Tamler)