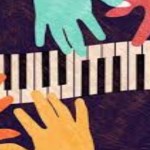 ‘Just the Two of Us!’ presents ‘One Piano, Two Women, Four Hands’ on April 6

Pianists Dianne Vars and Sheila Weidendorf will present an afternoon of musical duo delight, performing works of Bach, Brahms, Barber & more at 2 p.m. Sunday, April 6 at Trinity Lutheran Church in Freeland. Donations will be accepted at the door.

Dianne Vars moved to Langley in 2010 following her retirement from a career as a college music professor. Originally from New York State, she earned degrees from Mansfield University (piano), Indiana University School of Music (music theory) and the University of Washington School of Music (choral conducting and literature).

She has conducted choirs and taught music theory, piano and voice at colleges and universities in Missouri, Pennsylvania, Wisconsin and Washington. During these years, she also presented numerous piano duet and solo vocal recitals and concertized and toured in Wisconsin and Minnesota as soprano soloist with The Lyric Arts Trio.  In 1989, she was chosen Conducting Fellow of the Chamber Chorus at the prestigious Aspen Summer Music School, where she also received advanced coaching in orchestral conducting.

In addition to her work as a piano duettist, Vars currently serves as the conductor of the Island Consort Singers.

Sheila Weidendorf is a local pianist and the founder and Artistic Director of Island Consort, Whidbey Island’s resident early music ensemble. She received her B.A. in Music History and Piano Performance from the University of Minnesota School of Music, where she studied with pianist Duncan McNab. She earned her M.A. in Feminist Theology after injury thwarted her nascent performance career.

After a twenty-year musical hiatus, Weindendorf moved to Whidbey Island and re-energized her musical life as a pianist and as the Musical Director and pianist for several musical theater productions. She regularly organizes and performs in multi-artist classical concerts. She lives in Clinton.