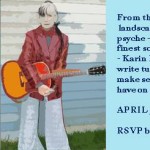 Karin Blaine and Russell Clepper are up to something again. Two years ago, the pair of tunesmiths teamed up to showcase their sometimes disparate, but always complementary, styles of songwriting in a series of three concerts over the space of several months at different venues around the island. At every show, the performance space was packed and the mojo was working.

“I felt like history was being made,” said Steve Heising, one of the hosts at a concert two years ago.

Now, the two troubadours return to the Heising’s place—the Whidbey Island Distillery (the “Bunker” as the Heisings call the low, flat-roofed building built into the side of a hill.) The public is invited to participate in the musical hubbub at 7 p.m. on Saturday, April 5.

“I’m hoping history will repeat itself,” said Clepper. “Each of the shows in our last series generated its own kind of magic. Bev and Steve Heising provide such a warm welcome and the intimate room at the Bunker, with the still in the next room, makes for an atmosphere that can’t be found anywhere else on the island.”

The format for the showcase features a back and forth exchange between the two road-tested song poets. Blaine will tell a story that introduces a song, and Clepper will answer with an anecdote about the song that Blaine’s song made him remember. His song, in turn, will spur a response from Blaine and s—as Mr. Vonnegut said—it goes.

“Before the evening has ended, something unexpected will fall out of the blue,” said Blaine. “And we’ll all think, ‘wow, what just happened?’ Whatever it was, I’m glad I was there to see it.”

Seating at the Bunker is limited, so reservations are required. Blaine said that people can RSVP at blainebooking@gmail.com or 206-331-2750.

Although the music begins at 7:30 p.m., attendees are encouraged to arrive at 7 p.m. to hobnob and enjoy some provided snacks. The event is BYOB and there is a suggested sliding donation at the door, from $12 to $20.

Blaine and Clepper plan to produce several more of these shows as the summer progresses and are organizing a songwriting camp slated for September 13. The camp will take place at the Storyhouse in the Whidbey Woods, the idyllic enclave that the Hull family lovingly created as part of their greater vision that comprises the Whidbey Institute at Chinook.

“Karin is the best songwriter I’ve ever worked with,” Clepper said. “I’m proud to colloborate with her in this way. She’s the kind of person who can stand on the mountain and tell the lightning where to strike.”

The Whidbey Island Distillery is at 3466 Craw Road in Langley.