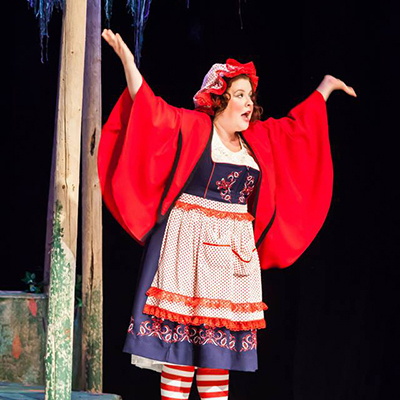 A performer, a master networker and an innovator (who now uses the singular “they” pronoun)—Katie Woodzick has created a space for themself* in the Whidbey community that will certainly leave an impression long after they’ve moved on to their next adventure.

Woodzick came to Whidbey Island nine years ago. In the summer of 2003, they had recently graduated with a BA in Theatre and was touring as an actor and director with Prairie Fire Children’s Theatre’s production of “Jack and the Beanstalk.”

Woodzick harasses Ed Cornachio in the role of the “Defenseless Creature” in Neil Simon’s “The Good Doctor. “ (photo by Jason Dittmer)

They had the option to renew their contract and continue to tour the Midwest, but decided instead to apply for multiple AmeriCorps positions. They submitted 12 applications for positions all over the country, and Whidbey Island was the first to offer them a spot.

“I was in a place where I didn’t know what I wanted to do with my life, so I decided I was willing to move anywhere, even though I had never been to Washington State,” Woodzick remembered. “It ended up being one of the best decisions I’ve ever made.”

In August of 2003, Woodzick packed all of their belongings into their car and drove from Minnesota to Washington State in two days. By spring of 2004, they were cast in two plays and offered a directing spot in Whidbey Island Center for the Arts’ 2004-2005 Theatre Series season.

“Katie brought their familiar energy, creativity, intelligence and flair to Island Coffeehouse and Books [in 2008], and made a difference in the lives of many, many young people in our community,” recalled Susie Richards, who led the AmeriCorps program at the time. “It’s been a joy for me to watch that passion and talent continue to touch our community in so many, many ways. Katie will always be a member of this community!”

Deana Duncan is the Programming and Production Director at Whidbey Island Center for the Arts. She remembers Woodzick coming in to pitch the idea of a partnership with AmeriCorps. Duncan has since worked with them on multiple productions.

“Directing Katie is a lot like trying to hold on to a thunderstorm,” she said. “Katie brings a power to the process and the roles created that can sometimes be misunderstood. I remember sitting with Katie in rehearsal, deep in conversation about how to spark the role and realizing again that this actor needs everyone involved to be giving 100 percent or we would be in trouble. How wonderful is it when one person on the team can hold the bar so high that everyone else strives to stay at top form? That’s Katie.”

Woodzick has worked with multiple theatres on Whidbey Island and in Seattle. Their love of the craft of theatre inspired them to start the Theatrical Mustang podcast, which features interviews with local artists and innovators. The podcast has produced over 90 episodes, which have been listened to over 8,000 times.

Most recently, they directed “The Flick” with OutCast Productions. Artistic Director Ned Farley has worked with Woodzick as both an actor and a director. He spoke enthusiastically of Woodzick’s artistic and marketing work with the company:

Woodzick strikes a pose with Ned Farley and Ken Martinez in “Jacques Brel is Alive and Well and Living in Paris.” (photo by Jim Carroll)

“Katie has been a delight to work with on many levels,” Farley said. “In all capacities their work has allowed OutCast to grow and [allowed] our audiences to see the variety of skills that they bring to theater. As an actor they have worked hard to bring each character to life. As a director, they have challenged audiences with sometimes difficult and uncomfortable material. As a ‘behind the scenes’ support person, they have helped bring OutCast to community members who might not have found us otherwise.”

Last month, Woodzick found out that they had gotten off the wait-list for Naropa University’s MFA in Contemporary Performance. This program is a two-year interdisciplinary graduate degree in theatre. They are moving to Boulder in mid-August.

“Into the Woods” is one of Woodzick’s favorite shows. They played Little Red Riding Hood at Whidbey Island Center for the Arts. (photo by Tyler Raymond)

When Woodzick found out they were leaving the island, they decided to put together a farewell concert performance. On Saturday, July 23, Woodzick will be singing 21 songs from 18 musicals, including favorites from Whidbey performances. The concert will be held at Whidbey Children’s Theater in Langley.

“This concert is my love letter to Whidbey Island,” Woodzick explained. “I have grown so much as an artist in this supportive community, I wanted to take the stage one more time to express my gratitude.”

Tickets can be purchased for Woodzick’s concert online at http://www.brownpapertickets.com/event/wlm/2569933.

Olena Hodges is the Associate Artistic Director of Island Shakespeare Festival and is also a founding member of ISF’s acting company. Olena is a graduate of the BFA acting program at Southern Oregon University and holds a certificate from Circle in The Square Theater School’s two-year Professional Actor Training Program. Olena is also the associate producer of the Theatrical Mustang Podcast.

*We are happy to support Katie Woodzick’s pronoun preference in this article. For additional information on the practice of using the pronouns “they,” “them” and “their” as singular gender-neutral pronouns, visit the following websites: http://grammarist.com/usage/they/, http://feministing.com/2015/02/03/how-using-they-as-a-singular-pronoun-can-change-the-world/ or search online.