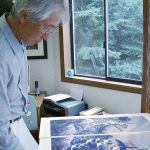 Keiichi Nishimura: ‘I Just Went in for the Pie’

“I just went in for the pie,” said Japanese artist, Keiichi Nishimura, about his recent visit to Greenbank Farm. “And before I came out,” he continued, “I had a show.”

Rob Schouten Gallery in Greenbank (near Whidbey Pie Café) is pleased to be the first to introduce this amazingly accomplished artist in his first show on Whidbey Island. The show will run from Oct. 1 to Oct. 30, with a reception from 1 to 4 p.m. on Sunday, Oct. 12.

“Twilight Wave,” mixed-media on silk by Keiichi Nishimura. (Images courtesy of the artist)

Nishimura was born in Kyoto, Japan in 1949. His father, Jintaro Nishimura, was a master in the style of painting on silk for the traditional kimono. The younger Nishimura was initially advised against becoming an artist by his mother. He tried, for a while, to follow her wishes, but found that he had a natural ability. “I was born to it,” he said. “I felt as if I didn’t have to learn it—the skill was already with me.”

Nishimura at work in his studio (Photo by Martha McCartney)

Finally, at the age of 27, Nishimura began his formal study with his father as master. He describes that time as one of observing and learning the basics. An apprentice lives with the master, learning first about the materials and tools of the art and spending years learning to mix colors and make paint the correct consistency. Everything about the process is painstakingly exact.

The paint, Nishimura said, is made from a mixture of pigment that he calls “mineral” or suihigofun and melted pine sap or nikawa—the binding agent that allows the paint to adhere to the silk. The mineral must be ground very finely before being combined with the heated sap.

Standing in his studio, one sees dozens of small jars holding varying colors of minerals that look like grains of coarse salt. He picked out one that was half-full of a gray color. “This is gray,” he said. He then picked out four other jars containing four other colors. “This is what I may mix to get a shade of gray. The colors I make have no names.”

He paints at a low table while seated on a tatami on the floor. After the grinding and mixing on a sheet of glass, he places each color in its own small porcelain dish. He begins each in charcoal and then renders them onto silk that is stretched on wooden frames.

“The first time I tried to stretch the silk was very difficult,” Nishimura said. “I did not even think I would be able to do that part.”

In addition to paint he applies gold leaf, which is wrapped in tidy paper-covered packets as it comes from Japan. He also uses a spattering technique to apply tiny chips of metal leaf to the surface, which lends an additional texture and source of light.

After Nishimura completed his apprenticeship he lived in San Francisco for several years and then in Hawaii where he exhibited in many galleries and became quite successful. Now from his light-filled Whidbey Island studio overlooking a mesmerizing view of Puget Sound, he is working on designs that are being reproduced on fabric by a textile manufacturer.

“Flower Waves,” mixed-media on silk from the artist’s private collection. (Image courtesy of the artist)

I bent low over one of Nishimura’s paintings to examine closely his technique. In one section of the silk was (in my ignorance of his skill) what I would have thought was a collage—a piece of patterned paper applied to the surface.

As I looked more closely, I understood that it was entirely hand-painted, and the portion I was examining was a repeating pattern of small flowers. “But these flowers are all exactly the same,” I said, as I looked towards him for confirmation and explanation.

“Yes. That is how they must be,” he answered.

Keiichi Nishimura with a fabric panel using his art. (Photo by Martha McCartney)

To see more of the art of Keiichi Nishimura, visit his website at www.nishimuraart.com.

Image at top:  Keiichi Nishimura and one of his silk paintings  (photo by Martha McCartney)