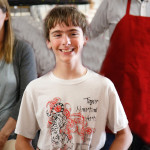 Kids can make a difference for other kids

Channel the energy and enthusiasm of young people in a positive direction, and they can make a real difference in the community.

Twelve-year-old Nolan Smith studies at Tiger Martial Arts Academy in Freeland. To earn his shodan black belt in karate, he not only had to be physically fit, but also perform community service.

Tiger students are encouraged by their sensei to be well-rounded members of the community and are required to perform community service as a way of “giving back.”

Nolan Smith and his grandmother Katy Smith display the quilt he made to raffle in support of Whidbey Island Nourishes. (photo courtesy of Katy Smith)

Under the guidance of his grandmother, Katy Smith, Nolan chose colors and fabrics and made a lap quilt, then displayed it for a couple of months at Tiger Martial Arts Academy to raise money through a raffle for a local non-profit.

Nolan chose Whidbey Island Nourishes (WIN) as the recipient of the raffle proceeds. WIN provides nutritious food for families through their weekly backpack program, lunches at the food bank, healthy snacks for teens at the Whidbey Academy and other youth programs, as well as free food vending machines in Clinton and Langley.

“Nolan learned about WIN from me,” his grandmother said, “and because he attends Whidbey Academy, he knows other kids who receive food from WIN programs.”

Tickets were sold at Tiger Martial Arts Academy and also by his grandma through her Facebook page. The winning ticket was purchased by Sherry Adolphi of Yelm, a grade-school friend of Katy Smith’s, who saw the quilt on Facebook and sent in $5 for raffle tickets.

The quilt raffle raised a total of $303 for WIN.

Nolan Smith presents Whidbey Island Nourishes board member Margaret Anderson with a donation of $303, proceeds from raffling a quilt he made with his grandmother as a community service project. WIN volunteers behind them include Carrie McArdle, Gail Halliday, Aiden Parker, Alohi Elliot, Carla Sousa, Jelcy Romberg, Tiffany Paine and Ted Ravetz. (photo by David Welton)

Nolan visited the WIN kitchen and observed volunteers at work before presenting WIN board member Margaret Anderson with the raffle proceeds.

“He’s proud of being able to help,” said his equally proud Grandma.

NOTE: WIN is holding its largest fundraiser of the year—a Summer Frolic with a Gypsy theme, at 6 p.m. this Saturday. For further information, or to learn how to contribute to WIN, CLICK HERE.

Nolan gets a “blue glove salute”. (photo by David Welton)

Photo at the top: Nolan shares a smile (photo by David Welton).

Betty Freeman is a WIN volunteer who enjoys starting her week with the wonderful Monday crew at the WIN kitchen.