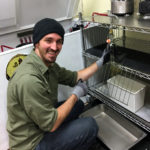 Kombucha: Brewing a Culture of Immortali-tea

Shawn Prickett’s addiction started as a small-scale activity. Like many addictions, the Greenbank resident said it began to escalate steadily, eventually becoming a full-time obsession. Soon, it took over his daily life and professional activities to the point where there was no turning back.

His addiction? Kombucha, a fermented tea drink thought to be an elixir of immortality, sustainer of life, and healer of grave illness with a history dating back to 400 B.C.

“I got absolutely and madly obsessed with it,” he says, “I started out (brewing) one jar at a time. Then five jars at a time. Then 50 gallons. Now it’s about 250 gallons,” he says with a satisfied, entrepreneur’s smile.

While Shawn Prickett’s Amrita Kombucha contains the same black tea, spices, sugar, and cultures as a home brewer, larger volume brings many complications. “I will continue to scale until I reach a point where I cannot keep the same quality standards for ingredients without pasteurization,” he said, indicating he still has room to grow. (Photo courtesy of Shawn Prickett)

Today, you can find Prickett’s bottled Amrita Kombucha in local grocery stores and restaurants, and he hopes to expand beyond Whidbey Island retailers after finding a new production space that can handle the volume-based goals he is planning for the new year.

“I don’t think there is a single demographic profile for kombucha. I know people of all ages and backgrounds who like it, and there isn’t a typical kind of person that I can describe. Really, it’s for anyone who wants to put something healthy into their body,” he says.

The drink is part of a mystical tradition, but its components are common. Kombucha is essentially black tea, sugar, water, and spices that are combined and fermented for about a week to a month, depending on the brewer’s individual preference.

The magic ingredient is also a bit of a wildcard. The only thing elevating kombucha from a jar of run-of-the-mill sun tea that might have spent too long in the back of the refrigerator is the presence of a symbiotic culture of bacteria and yeast. Known as a SCOBY, the slimy mass can be bought commercially in a health-food store, mooched from a brewing buddy, or built from the ground up at home. The SCOBY brings life to the concoction in a very literal fashion.

Shawn Prickett with a SCOBY in Amrit Kombucha’s Clinton-based kitchen facilities. They are on the small side, but have been adequate for his volume goals until recently. In January, Prickett plans to move into a larger space to allow for more volume to flow from fermentation tanks to bottles. (Photo courtesy of Shawn Prickett)

Like any other fermented beverage, decisions about the baseline tea and spice combinations, balanced with the length of time the beverage ferments, alter the final product. Factors that are less controllable, such as fluctuations in temperature or stability of cultures, create opportunities for lightning-bolt success through experimentation — along with unforeseen chasms of failure — from batch to batch.

Even perfect batches can be a bit controversial in terms of mass appeal. Kombucha is not always lauded for having an exceptionally pleasing flavor, to be certain. Some offerings express a more earthy flavor while others taste like vinegar. Nonetheless, there are legions of devotees addicted to the unique flavor, fueling the beverage’s $400-million market.

People are drawn to specific favorite beers, wines, or spirits, which creates a huge opportunity for differentiation between products. Kombucha consumers are similar. Like its fermented cousins, flavor profiles of kombucha vary widely, making any individual flavor less likely to be universally accepted than the sodas or juices located near kombucha in a grocery display.

Health benefits are an important driver that brings kombucha into shopping carts and homes and a reason some drinkers simply pinch their noses and take their “medicine” on a daily basis. The drink has been shown to be a strong detoxifying agent, protective antioxidant, powerful digestive aid, and healing joint builder. It is also thought to aid in building elasticity in skin and boosting the immune system.

People say they report feeling energized and healthier when they feed their kombucha cravings. In fact, health benefits are the primary force that brought kombucha into prominence.

Traditionally, “the tea of immortality” has healed kings and warriors, built energy, and guarded from illness. An intriguing tidbit of evidence supporting kombucha’s value as a preserver of human resilience came to light when researchers found that elderly residents of Chernobyl withstood radiation effects better after the melt-down due to their kombucha consumption.

The kombucha marketplace has grown a great deal since it took modern shape in the 1990s, and the evolution continues, says Prickett.

“A lot is happening with fermenting into a higher alcohol level. I would like to shift to an alcohol level of about 6 percent,” he says.

A beverage that offers a health kick with, well, a kick? That could be an elixir of life, indeed!