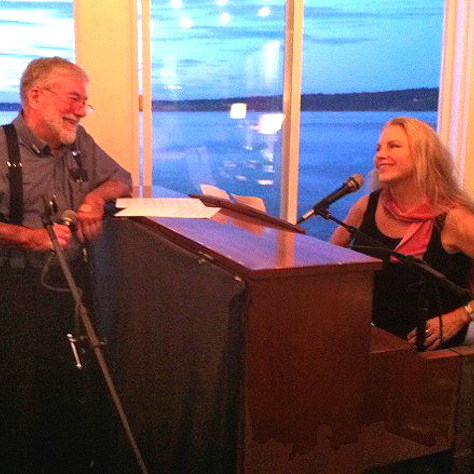 Langley’s Cabaret by the Sea

The warm light spills over you, even before you enter Ott and Murphy Wine Tasting Room, and the music slips out the door, wrapping around you along the Langley waterfront. What started as a wine-tasting space is also a well-loved music venue, where owners Diane Kaufman and David Ott want you to slide into a comfy chair and try one of their award-winning wines.

Nancy Nolan, a local professional vocalist and pianist, envisioned a piano on the small stage when the wine-tasting area expanded three years ago; she spent weeks researching and finally found the perfect instrument. Larry Shafer, who performs occasionally with Nolan, purchased the piano.

The music of “The Secrets” fills the Ott & Murphy cabaret venue. (photo by the author)

With Kaufman’s blessing, Nolan and Shafer added the piano to the small stage, where it’s getting plenty of use. Shafer has gone from being a student to recording his first CD of the “Great American Songbook” at the age of 82, becoming the “Bing Crosby of Langley.”

Nolan has lovingly dubbed the space “Langley’s Cabaret by the Sea.” The venue, she said, hosts an eclectic array of musical artists from jazz and performance art to folk, pop and country, and it features the local talent of musicians and vocalists on piano and guitar. “It’s warm and inviting,” Nolan added.

David Gregor, of Deja Blooze fame, performs often, but spends other evenings listening to the local music and sharing the wine, as he did a couple weeks ago on a Saturday evening. The music room was a transformation, a pleasant surprise, he said, and perfect for Langley. The night I attended, a trio—“The Secrets”—was performing and couples and singles filled the small cozy chairs and tables. The music was slow, easy to listen to, and the cozy recesses of this wine bar added to the intimacy.

Curled up on one of the couches was a couple that has been coming here consistently for several years—even before they lived on Whidbey. Jason Waskey and Mary Jo Reynolds traveled from Seattle at least once a month to spend an evening here and enjoy the wine as well as the music. “It’s what was needed,” Waskey said as Reynolds leaned forward to appreciate the music. They still come at least once a month, believing that the Cabaret has become one of the nicest venues in the Northwest.

There are lots of different kinds of music elsewhere in Langley, Waskey said, but this is “something different.” Nearly every weekend evening, musicians share their gifts with various instruments and with or without a piano. It’s also a good way to spend a lazy Sunday afternoon—when Troy Chapman, former member of “Pearl Django,” and Gary Way often entertain.

Mary Jo Reynolds and Jason Waskey enjoy the evening. (photo by the author)

Throughout the year, Ott and Murphy also offers unique performances and themed cabaret shows. David Ossman, founding member of Firesign Theater, has also added much to the performance of an authentic cabaret, according to Nolan.

Ott and Murphy Wines opened Valentine’s Day in 2011 and started the Cabaret within a few months. When they had the chance to expand the size of their venue, they did that, too. The “Murphy” part of the name comes from fellow winemaker Eric Murphy, who left to focus on his career as a senior mountain guide; he remains a friend and consultant.

The owners had other careers before settling in Langley, as social worker, teachers and working at another winery in California. And they’ve managed other businesses.

Producing award-winning wines, however, remains at the heart of their business. “We do try to keep our wines as high-end as possible,” owner Kaufman said. Washington State, she added, is on the same latitude as France, so Ott & Murphy wines are modeled on French wines and are a little lighter than California-style wines. Their winery offers some unique reds: Syrah, Radieux and the locally named Double Bluff Red. They offer white wines also: Possession—a blend of Viogner, Rousanne and Grenache Blanc—and a Gold Medal Marsanne.

Sabra Whitlock pours wines on the weekends and suggested arriving early to pick out a wine you’ll want to drink during the show—just to make sure you have your favorite before finding a good seat. Wine tastings are offered from noon until 6 p.m., before the music starts, and during the music on Sunday.

Kaufman’s daughter, Brook Ott, and her husband, Chris Hunter, returned to the island two years ago when Hunter took over Murphy’s winemaking duties. Hunter and Ott plan to own and manage the winery and tasting room operations in the future. Kaufman and her husband David Ott are ready to take some time for themselves, but that’s not saying the original winemakers will stop being involved.

Ott and Murphy Winery has a new logo! (image courtesy of Ott & Murphy)

“The success of the venue is something we never anticipated,” Kaufman said. “Now we see this place as a type of community center and it’s what we like best—being part of the community. This is our life now,” Kaufman said, “and it’s a lot of fun.”

Check out their Facebook page (Ott & Murphy Winery Tasting Room) or their website for the weekend cabaret schedule (http://ottmurphywines.com) and watch for their greatly simplified logo: “OM.”

** The Cabaret Company presents A Weekend of Fools and Foolishness Abounding Friday and Saturday, April 1 and 2 at 7:30. Curated by Firesign’s own, David Ossman, with Joni Takanikos, Siri Bardarson, Patricia Duff, Natasha Nichols, Judith Walcutt, Max Cole-Takanikos and many other performers who treasure the annual foolishness that April brings. The Four Holy Fools of the Apocalypse (Firesign Theater’s) will appear in all its glory. $9 cover per show.

Deb Crager is originally from the Midwest but has lived on the island for 25 years. She wrote the book “101 Things to do on Whidbey Island: for a Day, a Weekend, or a Lifetime,” available on iPad and Kindle Fire, with older copies in print from Amazon and E-bay.