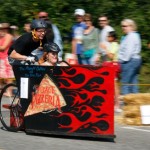 It was a fine day on First Street as the Soup Box Derby contestants raced downhill during the annual Soup Box Derby on Sunday, Aug 17.  Since 1972, Langley’s Soup Box Derby has entertained with the innovative car designs and costumes.  The streets were lined with spectators and straw bales, the bales being used only one time by local legend Peter Lawlor and his “over-ripe old banana” car.  The Whidbey Island Winery won by a barrel and trophies were handed out to all the participants.

Peter hits the straw bales at the end of the course but explains to Gretchen that no straw was injured.

No straw bales were injured in this crash.

Wren Leoshefskie is driving with Alden Allen behind in the Zippy car, Car 13

Colin Campbell is at the wheel of the Bob Bowling drag racer complete with drag chutes and sponsor logos.

Robin Black, Langley’s new city councilwoman, is at the wheel of the black racer.

Siobhan Wright pulls the green car uphill with the help of Wren Leoshefskie and Lila Stack. They were up all night getting the car ready for the race. Tim Leonard built the car and Siobhan decorated it for the race.

Siobhan speeds down the course in the little green racer.

Phil Simon’s rig, built on a Formula One chassis, showed some speed.

Peter gets a lift up first street from Noah Stevens.

Noah Stevens gets edged out by the reclined Randy Thompson in yellow in Donkey Hotay.

Luca Fallows and Janoah Spratt prove that two is company, three is a crowd

(photo at the top: Village Pizzeria speeds down to the course)