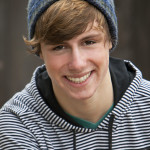 When Lijah Hanley was 11 years old, he asked for a camera for Christmas. His mother gave him her old Canon Rebel SLR, but he had to repair the shutter with money from his allowance.

Hanley, 18, now has a solo exhibit of his current photographs at Inspired Arts Gallery in Freeland during the month of April.

Assisting his mom doing portrait photographs when he was still little, he knew he wanted to make photography his life’s work. “Before I had my own camera, I’d help my mom by holding the reflector when she was taking the pictures,” he said, adding that she’s always been a major inspiration and mentor.

With his new ‘old’ camera, the young Hanley began taking his own pictures. “I took pictures of anything and everything in my backyard—insects, leaves, trees.” Recently, while going through the “old stuff in my garage” in preparation for a move, he found many of his old photographs and was reminded of the hundreds of pictures he had taken in that first year.

When Hanley was starting middle school his father got a contract for work in Georgia and the family moved to a small town north of Atlanta. His seventh grade art teacher saw some of his work and was so impressed that he started taking Hanley out of class to go on photo shoots.

“The King of the Truffulla Trees” by Lijah Hanley

In the eighth grade he took an advanced-placement class and was allowed to decide where to focus his energies. Hanley says, “The kids [in the class] decided they wanted to enter their work in as many contests as possible. That’s what encouraged me to enter a photo competition for National Geographic Magazine.”

Hanley entered a portrait he had taken of his sister, Beth, integrated into a landscape scene. The photo garnered a prize in the 2009 National Geographic “Hands On Explorer Challenge” for youths under 18. He shared the prize with 14 other young winners who got to spend 12 days in Peru and the Amazon jungle with Bruce Dale and Amy Toensing, highly-regarded professional photographers from National Geographic Magazine.

This was Hanley’s first win, and he started seeing himself as a professional photographer. It was, he said, the beginning of his obsession with the art of photography. After three years in Georgia, Hanley’s family moved back to Vancouver, Washington, and Hanley chose to do home schooling so he could focus on his photography.

He learned digital process with the help of a neighbor. And with the help of his father, who has assumed the role of his business manager, he began his career as a professional photographer.

He started selling his photographs at the Vancouver Farmer’s Market, began passing out business cards and created a website and a Facebook page that now has over 6,000 followers.

Hanley has won several awards in addition to the first award from National Geographic. This past July he was the only winner in the National Geographic Student Expedition Contest and went to London for two weeks. The trip gave him a great deal of publicity and a big surge in visitors to his business website.

Currently, he shows his photography at the Vancouver Farmer’s Market and the Portland Saturday Market; he also has 12 shows lined up so far this year. He decided the Puget Sound area, with its call to tourists, was the next place he wants to establish a presence. He will be finishing up an exhibit in Seattle the end of March at the “Best of the Northwest Spring Art Show.” Then, by an amazing bit of serendipity (to which we here on the island are accustomed), he’ll be coming to Whidbey.

Steve Sloan, one of the artists associated with Inspired Arts, learned about “an amazing teenage photographer.” He told Sue Averett and Ron Roesler about some of the photos he’d seen and, with some Google detective work, they found Hanley. After looking at his website, Averett said, “Let’s see if he’s willing to come to Whidbey.” She emailed him, and he responded with an immediate “Yes.” “I have some friends who have a cabin on Whidbey,” he said, “and I’ve really wanted to come for a visit.”

Pictured at the top: Lijah Hanley (photo courtesy of the artist)

Carolyn Tamler was a marketing research and community involvement consultant in the Seattle Area for many years before moving to Whidbey Island, where she has become known as a writer who enjoys telling the stories about the many businesses and entrepreneurs on the island