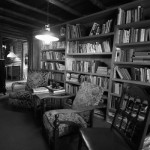 What’s true for homebuyers is equally true for writers: place is paramount.

According to novelist Molly Gloss, “The small, essential details of place make the fictional world whole and convincing, as if these particular people could only have performed these particular acts in this particular setting.” Her remarks, delivered at the Whidbey Writers Workshop MFA Residency Program held at the Captain Whidbey Inn Aug. 4-12, had the writers in attendance nodding their heads and taking notes. The Whidbey Writers Workshop MFA Program is one of the writing programs offered by the Northwest Institute of Literary Arts (NILA), located on Whidbey Island.

If place is as important as Gloss claims, there’s a kind of genius at work in NILA’s choice of venue. The Captain Whidbey Inn—intriguing, suggestive, evocative—is not unlike a good tale. It contains twists and turns: narrow passageways, blind alleys, innumerable staircases inside and out. It grafts myth to fact: although reputed to be constructed from trunks of the Madrone tree, it’s hard to believe the twisted stems of such trees could produce logs straight enough for building. The Inn’s history is filled with reversals and surprises: today’s front door was originally the back door because in the early 1900’s most guests arrived by boat and entered from Penn Cove. The Inn has what writers call “backstory” and what the rest of us call a past: it formerly served as a boarding house, private residence, post office, general store and girls’ school. The Inn is even reputed to have a hovering presence, a ghost of its own—and it’s not who you might think. Even the name of the Inn has changed—as if the original name, Whid Isle Inn, was a working title abandoned for something better suited to the evolving story.

Here in this setting, with its “details of place”—treadle sewing machines, steamer trunks, spinning wheels, crank phone, pump organ—gathered the 57 students enrolled in NILA’s master’s program for ten days of study, discussion and debate about the art and craft of writing.

The origins of the program, a story in itself, begins in 2002 with a five-person team of designers including current director Wayne Ude. They faced the kind of hurdles that keep innovative programs like NILA’s from ever taking off. “I faced mountains of blankety-blank paperwork,” he recalled. But with a doggedness not always typical of the visionary, Ude methodically won the necessary approvals from state, federal, and agency authorities for his hybrid program—part online, part on-the-ground.

“As of this residency’s graduation on August 9th, 52 alumni will have completed the program,” Ude said. “We’re about as large as we ever intend to be.”

Despite its growth, the program has managed to keep a front-and-center focus on a community in which established and aspiring writers encourage and mentor each other.

Nowhere is this more evident than the evening readings held in the Inn’s dining room. Against a backdrop of old mirrors hanging on the wall, students—both new, continuing and about to graduate—read their poetry, fiction, and nonfiction to their peers in an atmosphere of delight, pride, and encouragement—the kind shared by working artisans devoted to their craft.

It’s further testament to the program that many graduating students remain in the fold, volunteering their time and skills to improve NILA—expanding social media, refining information technology, spreading the word. In NILA’s case, there are no better ambassadors than the graduates themselves.

Fiction author Doyce Testerman is one such ambassador. An instructional designer in academia and a working writer, Testerman was initially skeptical. “The focus of most MFA programs seems to be turning out teachers of writing,” he observed. “I wanted something focused on living as a writer.” Testerman is exactly the sort of person for whom the program is designed: those with busy lives, families, jobs. Before enrolling, he weighed the sacrifices. “In order to attend the residencies, I’d have to chew up all my vacation time, leave my wife and three kids for periods. Why? My agent and publisher didn’t care if I had an MFA.”

After enrolling in a nine-day residency to sample what NILA had to offer, Testerman signed on. “I knew I would become a better writer. The faculty and students make me want to try harder. When I see what students and grads bring to the readings, I step up my game to match.” The 43-year-old Denver-based author is due to graduate next August.

Fantasy writer Nicole J. Persun is four days into the MFA program. A published writer, the 20-year-old native of Port Townsend was introduced to Wayne Ude five years ago by her father, who is also a writer. “I started my first novel at the age of 13,” she recalled. “When I was very young, my father made up bedtime stories with me.” In fact, Persun’s final project for her bachelor’s degree was a comparison of actual events in the life of her father, Terry Persun, and events in the fictional lives of his characters.

Because NILA is in her own Northwest backyard, Persun hesitated before applying. Her association with Ude helped tip the scales. “Wayne has seen my development as a writer,” she said. Affordability was also a factor. “I decided not to go $100,000 into debt for a two-year degree.” Active in several writers’ associations as a board member and/or instructor, Persun had ample opportunity to compare MFA programs, both on paper and through word of mouth, before settling on NILA. “It was my first and foremost choice,” she said.

Former cop Craig Anderson is the first veteran to be enrolled in the program. After 26 years in the military, Anderson enrolled in Eastern Washington University to develop his writing skills. Upon submitting a short story and a chapter from his novel-in-progress (“Alone Against the Dead” featuring a retired military cop as protagonist), Anderson was accepted by NILA. Together with Ude, Anderson had to climb the “mountains of blankety-blank paperwork” to ensure the 9-11 GI Bill would cover his tuition. But he considers it well worth his time. “I’m a native of Spokane. I don’t have to move, I don’t have to uproot my life. This program works for working people.”

After 15 years in public relations, 55-year-old Carla Sameth knows the power of image and the potency of story. Teaching others to write memoir has reinforced that knowledge.   “For years I’ve been helping other people tell their stories; now I want to tell my own,” she said of her reasons for enrolling in NILA’s MFA program. A resident of California, Sameth plans to write about her own experiences as well as continue to help others—community college students, youth, incarcerated populations—write about theirs.

Although Jim Gearhart, 48, is a student in the MFA program, he is also about to become editor-in-chief of NILA’s biannual magazine, “Soundings Review.” Like Testerman, Gearhart “test drove” the program by enrolling in a residency in the summer of 2012, hoping to learn more about his chosen genres: fantasy, science fiction, nonfiction and essay. “I’d taken online courses and felt there was something missing,” he recalls. “Here at the NILA residency, the morning workshop is a turbo-charged writing group.” He also likes the opportunity NILA provides for students to continue to react to each other’s work online after the residency has ended.

“The atmosphere here is incredibly supportive,” commented Gearhart. “There’s no feeling of competition. You learn from your fellow students. We’re in it together.”

Gearhart’s sentiments are widely shared. “The people involved in NILA are a large quirky family,” added Testerman. “We keep track of each other, of our personal bogeymen.”

It’s just as Molly Gloss said: these people could only have written these words in this setting. All together, at the Captain Whidbey Inn, in early August 2014.

One can’t help but feel that the ghost drifting up and down the twisted staircases of “Whid Isle Inn” would agree.

For more information about the MFA program, NILA’s individual residencies, or the October Whidbey Island Writers Conference visit nila.edu. To learn more about the writers mentioned in this article, visit their individual websites.

(All photos of the Captain Whidbey Inn by Martha McCartney)

Dianna MacLeod received her journalism degree from the University of Michigan and is an alumnae of Hedgebrook writing retreat for women. Under the critical eye of her Whidbey Island writing group, she hopes to complete her novel, “Sainted,” in 2015.