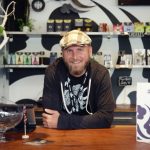 Through His Own Healing, Lucas Jushinski Brings Healing to Others

If any Whidbey Islander has earned the right to indulge himself with an extended stay in Europe, it’s Lucas Jushinski. A veteran of the Iraq war — including service as a combat medic in the battle of Fallujah — and a successful local businessman whose generosity has benefitted Good Cheer and several other island organizations, Jushinski would be justified in laying back and just taking it easy. But his temporary residency in Grenada, Spain, has a deeper purpose and can’t really be called an indulgence. It’s a purpose that grew out of his eight-year service in the U.S. Navy.

Lucas Jushinski behind the counter at Island Herb before leaving for Spain. (Photo by Michael Stadler)

“I’d traveled to these different countries where people speak two, three, four, five languages, and I’m sitting there only able to speak English,” he recalls. In early February, Jushinski arrived in Grenada, determined to change that. His goal is an ambitious one. “I’ve dedicated myself to staying here until I can speak Spanish fluently,” he says. But Jushinski has pushed through far more intimidating challenges in his 40-year life. And the patience he cultivated in confronting those other challenges is serving him well in accepting the pace of his language acquisition. “It’s coming, it’s just slow. It’s slower than I was hoping for, but I’m okay with that,” he says.

“Slower than I was hoping for.” The same could be said of his transition out of the military after suffering traumatic brain injury and PTSD stemming from his front-line service as a combat corpsman. And like many returning veterans, Lucas found that the effects of the large cocktail of drugs prescribed by VA doctors was worse than the conditions they were meant to alleviate. As he recalls, “I felt like a zombie. I didn’t feel like I was being healed at all.”

Ultimately, the pain of that led to a moment of decision and a commitment to personal power. “I said okay, this isn’t working, and I took myself off all those pills. I had to find my own path of healing.” Support for that path came through the Warrior Transition Program at Evergreen State College, where Jushinski returned to finish his degree. “I started studying what warrior transition was and what it meant. It really started to help give me a better idea about the process I was going through, because I didn’t understand the process. I didn’t know what I needed at the time.”

Part of the Evergreen experience involved volunteer work, which Lucas performed as an intern in the Good Cheer Garden. The simple processes of that work were therapeutic, “Digging dirt, getting on my hands and knees and planting food, helping people.” he recalls. The “helping people” part was especially meaningful for him. “Being of service again to other people was a big part of my healing. Working at Good Cheer was instrumental in my recovery.”

During this time, Jushinski remained true to his commitment to steer clear of the synthetic drugs that had left him feeling he had “lost connection with humanity.” He was open to the possibility that the natural medicinal properties of certain plants could be beneficial. He obtained a medical cannabis card and began using it. The results were welcome. “I noticed how cannabis really helped me to calm down, to find some sort of peace of mind again. It helped me to sleep. It helped me in all sorts of ways.”

That was 2011. At the time, there were no medical cannabis dispensaries on Whidbey Island. Dealing with the necessity of traveling to Seattle to buy his cannabis triggered a realization, “I can’t be the only one on the island who’s suffering, who needs to go off the island to get cannabis.” And it led him to a decision that would change the direction of his life. He decided to open a medicinal cannabis dispensary.

Jushinski had no background in business, but he received support from the community, not only in terms of mentorship and financing but even with the set-up of the store when he was finally able to put all the necessary pieces together. “People also came together to help me build the store out, with construction. The community came together to help me when I was struggling.”

As Island Alternative Medicine’s client base grew, so too did Jushinski’s awareness of the benefits people were receiving from the various cannabis strains and preparations that he carried in the dispensary. “I knew what it was helping me for, but then all these other people would come in and tell me their stories and I would be overwhelmed with how much it was helping people.”

Some changes arrived with the legalization of recreational cannabis — including the launch of a new company, Island Herb. In the original dispensary model, Lucas would see only one person at a time. “And they would come back, they’d get complete privacy, and we’d be able to talk about their condition and what they’re going through.” In the new company, Jushinski has tried to mitigate the impact of that change. “I’ve hired a lot of great people to work there. So, usually when you come in, you don’t have to wait, there’s someone to help you right there.” Another way he seeks to maintain the original medicinal intent in an environment that now includes recreational use as well, is through training. “My goal is to send all of my employees to the medical cannabis program they offer at Seattle Central Community College.”

Jushinski remains grateful for the support he’s received from the Whidbey community — especially Good Cheer, to whom in May, 2014, he pledged to match up to $10,000 in donations. Cary Peterson, garden program coordinator for the South Whidbey School District, who came to know Lucas during his internship, believes his generosity is deeply ingrained and his success well-earned. “Lucas is a very generous and open-hearted person. That’s his intrinsic nature, and I’m just really glad he’s been able to flourish in this community.”

As Jushinski focuses on his current challenge of achieving fluency in Spanish, he feels the day-to-day operations of the store are in good hands. “Eric, my store manager, and his team are super stellar performers. They run the store with integrity. They treat our customers with kindness and respect. And they all have a great amount of knowledge with regard to the products we carry.”

And after Grenada and fluency? Jushinski is beginning to think about a new project: a retreat center for veterans dealing with PTSD. “I want to create a place where veterans who are suffering can come and experience a different type of healing than maybe they’ve had any awareness of. The VA and the military, they only know the pills, they only know the narcotics. They’re coming up with new ways, but I’d say that’s their primary way is through pills. And I want to show veterans that there’s a different way.”

Mark Forman is a filmmaker and writer who moved to Whidbey Island with his wife Kathleen Secrest in 2015. Mark’s favorite projects include: “The King of the Hobos,” a film portrait of Steam Train Maury Graham, which aired on PBS at the beginning of Mark’s career; a promotional video for La Romita School of Art in the Umbrian region of Italy filmed in 2008; and a fund-raising video that he and Kathleen produced last fall as a donation to the Whidbey Institute.

Have a great story idea? Let us know here.