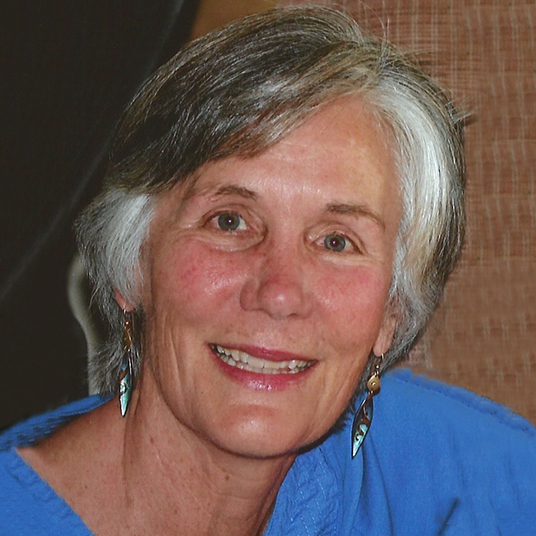 Religions have been preoccupied with trees as symbols, from the Edenic tree of life, the focus of much Western art, to the evergreen of Christmas. But, given our assumption of human exceptionalism over nature’s objects, hardly does one expect to turn to a tree itself to find solace.

Yet it was to a tree that Dr. Susan Scott, Jungian psychotherapist, intuitively turned in her own bleakest hour. Then again, if spirituality might be described as “communion with the life-force,” as Scott puts it, seeking the counsel of the natural world, may be, well, natural.

Cedar, a respite for walkers on trails east of Langley in  Woodmen Cemetery

Back in 1992, when Dr. Scott was already well established in clinical practice in Seattle, she found herself in excruciating back pain from a herniated spinal disc. Leaning up against a tall, sturdy cedar tree and asking for help after an exhausting MRI opened her to a new way of seeing the healing process: trees, whose life stories were visible in their structures, revealed ingenuous ways of healing as they grew around obstacles or healed from seemingly devastating wounds. The creativity she witnessed in nature inspired metaphors of healing for her clinical practice as well. And it brought her to the forests of Whidbey 20 years ago as she committed herself to writing what she was learning through her reconceived practice.

“Maybe you need to be in Nature to finish your book,” whispered a wise friend as they walked the beaches of Double Bluff in 1996. Today Dr. Scott splits her practice between her South Lake Union location and her home-office in Langley, where she finished her book, “Healing with Nature.”

Unable to sit for extended periods of time, Scott initially walked the city parks of Seattle to find relief. Eventually she offered walking sessions as part of her therapy with clients. With trees, Scott found a new way to help her clients address their own psychological impasses. The life of a tree, she explains, does not depend on being fixed or cured; a tree finds ways to continue on. It’s a vital lesson for we humans: our disorders, dysfunctions or diseases need not keep us from thriving. We can emulate trees and, no matter our diagnosis, continue to grow.

New life emerges below a split in the trunk of a cherry tree at Third St. and Brooks Hill Dr. in Langley.

The tree is situated, more obviously than the human, given our historic, cultural disconnect from nature, in an interactional energy field of sun, water and soil. Consequently, allowing trees or other natural beings to tutor us can shift an understanding of suffering, which we humans often greet as merely repressive: decay, truncations and regeneration are all endemic to the natural world.

And whether needing to move around an obstacle, like a rock or a roofline, trees work with the wisdom of the life force, sending out new buds of potential. Allowing ourselves to settle down in devoted attention, we humans can visually assess how trees grow beyond what cannot actually be healed. According to Jung, “The creative urge lives and grows in [a person] like a tree in the earth…”   If so, we too can trust the natural healing process, the creativity inherent in the life force of both humans and trees.

Root cells turn to trunk cells when they reach enough light, creating a new tree on the trails east of Langley in Woodmen Cemetery.

Scott speaks of the relationship to trees as one of “entrainment” to a healing rhythm. Like a frantic baby held close to her mother’s heart, slowly the baby’s heartbeat “entrains” to the mother’s, calming the baby’s roused emotions. They begin to share the serene breath of the composed mother—just as Dr. Scott found herself comforted by leaning her aching back against the cedar.

A sturdy pine provides shelter for a young Madrona growing at the Whidbey Institute in Clinton.

If “healing with nature” shifted clients perceptual relation to their obstacles away from the pathological labels of a clinical, medical model, it also shifted Dr. Scott’s role as therapist from medical authority—seated as diagnostician over the presenting patient in the enclosure of an office—to peripatetic healing companion. Surely, Dr. Scott is one well-versed in the sciences. But having been an acute observer of nature for 20 years, she has learned, in addition, to watch for the buds of potential, pushing through and around obstacles, in the lives of her clients. She speaks of her work as helping people access their own creative possibilities amidst the energetic fields in which they are caught up.

Dr. Scott grew up in non-denominational Christianity. The sense of communion she learned there has shifted, during her own maturation and given study of other religions, into a spiritual naturalism. She describes her current personal practice as one of communion with that mysterious, indefinable force of life that is within each of us and much larger than all of us. Her devotion consists of being in daily prayerful relationship to this creative and healing energy. Scott speaks of that relationship as built upon the exchange of “call and response,” which she considers innate to our humanity.

Sunrise at the Clinton Ferry Terminal

In 2000, in response to particular moments that awakened what Joseph Campbell speaks of as “the rapture of being fully alive,” she wrote one haiku per day. Since 2006, she has carried a camera on her walking practice, and you may well meet up with her in the woods, at Double Bluff beach or on the streets of Langley. In photography, Scott says, “I am there fully to what calls me.” Her photographic eye, welcoming and loving, holds and honors those moments of nature’s exuberant generosity—sometimes twisted, truncated, but always persistent.

As humans today become technologically and conceptually distracted, trees and the natural world may be the companions calling out to those of us who are now among the new technological “shut-ins.”

Dr. Scott’s book, “Healing With Nature,” can be purchased at Moonraker and the South Whidbey Commons, both in Langley. The devotional offerings of the call and response she carries on with the natural world can be viewed at her website: susanscottphd.com.  All photos accompanying this article were shot by Dr. Scott with the exception of the featured photo by S. Magaddino.

An academic theologian and philosopher by background, Sharon Betcher is now an independent scholar, writer and wannabe farmer living on south Whidbey. As a writer, she won the 2012 Short Story Smash and took first place in the memoir category of the Whidbey Island Writers Association’s 2012 contest. In March 2015, Betcher presented at the annual Women of Whidbey (WOW) Stories Conference. See her story at http://www.wowstories.net/archive/2015-speakers-performers/wow-2015-sharon-betcher/.