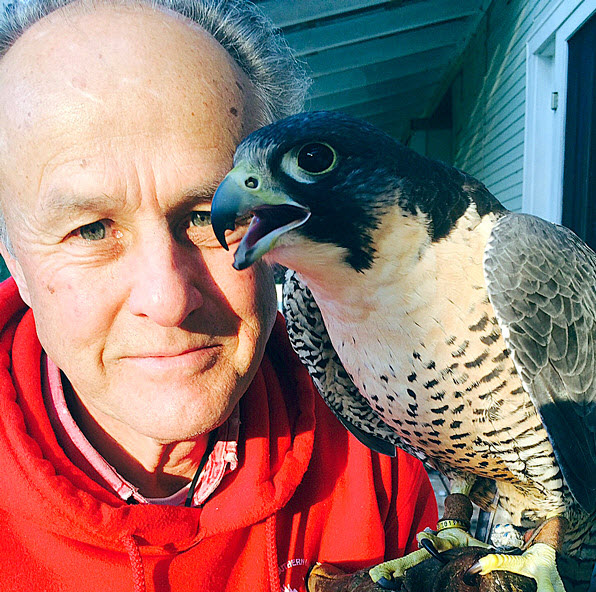 Lumens || Of Falcons, Rabbits and the Ego-logical Niche

Zoologist Steve Layman stood, quietly surveying the emotional surges moving among those gathered for Langley’s public forum on rabbits last October. Layman, the eagle-eyed falconer, watched how ideas collected and formed pockets of allegiance; he felt the effects, like winds and riptides, move through the room.

European grassland rabbits, released on the Island County Fairgrounds and finding sanctuary there, have dug holes in the fairgrounds and the school’s athletic fields, endangering horses and athletes and creating warrens that undermine building structures. The problems and the cost of potential repairs seem to multiply as quickly as do bunnies.

While some Langley citizens have become vexed at decimated gardens and landscaping, the floppy-eared bunnies—the very image of the Easter bunny—also engage other human sentiments. They are the epitome of cuddly cuteness, easily resembling a child’s first stuffed animal or summoning memories of Beatrix Potter stories. At the same time, some residents simply wonder how we avoid inflicting further animal suffering, or learn to welcome animals into human settlement patterns.

The October forum and this issue constitute—Layman has suggested, retrospectively—an ego-logical niche. His intriguing conceptual conflation reminds us that our conscious and unconscious fears, fantasies, resentments and desires shape not only this animal’s fate but our landscape, even our images of nature. When we negotiate the politics of ecological niches, the human ego is always already present.

And if he had to choose, Layman said, between tending the flight of falcons, a discipline built into the daily dimensions of his life, and a room as emotionally rife as this, he would, in a heartbeat, choose the latter—this ego-logical niche, that is. As he put it, “Being up in the mountains doesn’t interest me as much as [being in] that room.”

A Langley Rabbit, the epitome of the Easter bunny (photo by Kelsey Fein)

Layman grew up on the edge of the Yakima Reserve in the town of Union Gap. As a kid totally immersed in the outdoors, tracking was his first language. An active hunter who captured his first hawk at age twelve, he learned to read the intersecting paths of a multitude of animals—their history as told by tracks and scat, and their possible future as projected paths through the ecological niche.

Only by applying his tracking skills to a printed textbook did Layman find his way in elementary school and then, later, the university. He learned that “knowledge is like a hunt”—a hunt for ideas, for the way emotions and affects carry ideas. At the same time, he worried—as he still does—that we Westerners have lost the ability to pay attention to the “white noise” of the universe—the ambient dimension of birds and bees, seasonal winds and animal movement, for example—as our first, primary sensibility.

Layman’s biological impulse turns philosophically reflective around the ideas and affects released as religion; he doesn’t trust that form of religion as textually anchored as is education today.

“Knowing is so much harder than believing,” he observed. But neither this critique nor his “natural history lifestyle” has led him to be dismissive of religion. “Religion, too, has had—evolutionarily speaking—adaptive outcomes, especially in terms of handling primitive emotions.”

Regarding Western Christianity specifically—the purview within which he grew up—Layman noted that religions have amended instinctual energies—the muscle of kinship welcoming a stranger or a step-child, for example. The sense of a “greater than self,” as Layman put it, led religious groups to value minorities, not just extend the crushing power of the majority.

Back to the Forum

The future of earth and its species, Layman said, will be deliberated in civil conversations like the one Langley organized for the veritable Easter bunny. The natural world is part of us now—symbiotically yoked to our human drives, desires and our disaffections.

Rabbits, a microcosm of the discussion ahead of the human community (photo by Kelsey Fein)

Rabbits are, in other words, a microcosm of the ethical conversations ahead for the human community, whether in small neighborhood and village pockets or on a bio-regional and planetary scale.

Gently and diplomatically, as a biologist offering information, Layman enlarged the Forum audience’s scope of concern: these non-indigenous rabbits have an eco-niche between city and woodlands, beyond which their population will not expand. Such a warren of rabbits also has alpha males and females, which push their juvenile competitors into the woods, where predation by coyote and birds of prey inherently takes over. By abetting feral “city rabbits,” we should know that a debt of suffering accrues outside of human eyesight.

The Washington State Department of Ecology has declared the “Langley rabbit” neither wild nor native. Without legislative guidelines to categorically declare them a wild or native species, the future of these rabbits depends solely upon human discernment. What resources do we have available as a city, school and/or among individuals to care for them?

Nature through the Lens of the Human Ego

Because we view them through human ego and sentiment, animals, insects and other life forms live in our shadow—left to die or come to illumination. The title of a recent book, Hal Herzog’s “Some We Love, Some We Hate, Some We Eat,” precisely encapsulates the situation.

And when it comes to rabbits—even the Easter bunny—we humans are not of a single mind. Or heart. Or appetite.

We all have ego-invested pictures of ‘Nature,’” Layman added. Evolution teaches us that there is no “balance of nature.” There is no such “pre-set,” built-in design for survival. Life is a complex of symbiosis and striving.

The pastoral image of nature is not, we now know, a true picture of our evolutionary world. Such a romantic view of “nature” is a photo still—an ego-informed cognitive bias, a picture affected by our economic position and how and where we work. As Darwin insisted, what appears “nature’s harmony” is always in flux—a complex of dynamics, like adaptation, variation, symbiosis and struggle—all dynamically interlaced.

Of Spirit and Ego

Earth’s evolution now moves, Layman repeated, through just such human, emotional niches as we experienced in discussing the Langley rabbits. These ego-logical niches present us with something of a new religio-spiritual challenge. Tracking our human attachments, learning how to navigate such dynamic intensities, becomes as significant—even spiritually so—as any other work on human conservation.