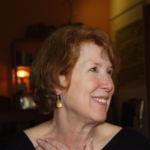 Lumens || When the Heart is Lifted: Valerie Easton

Val Easton is most widely known as “The Natural Gardener,” her weekly column in The Pacific Northwest magazine included in the Sunday edition of The Seattle Times. On South Whidbey, she is also a beloved yoga teacher and the owner of Langley’s Half-Moon yoga studio. Easton has been a student of the soil and of the soul for almost the same amount of time. While Easton started studying yoga in her twenties, she began teaching only five years ago. After leaving her position as horticultural librarian at the University of Washington Center for Urban Horticulture, she moved to Langley in 2005 and opened her studio in the Village off Second Street in 2010.

On a Friday morning in late March, Easton settles her 15 students on their yoga mats, inviting them to observe how, like the vine maples swelling with bud, our human bodies catch the rush of rising sap. “We get heady and then exhausted in springtime,” she observes. The practice today will consequently be, she informs them, one of twists—to wring out and oxygenate the organs—and balance poses, specifically addressing the body’s need to hold its ground amidst the heady winds of spring. Ayurvedic sensibilities summoned, Easton—with settled calm and an inviting chuckle—leads her students through imitative animal poses (downward dog, lizard, dead bug) while encouraging them to “ground your feet,” “float your chin,” and always and again, “lift your heart.”

Of Vine and Breath

Easton’s two practices of embodied wisdom, yoga and gardening, are as much philosophically informed as they are visceral and as practical as they are spiritual. “Yoga has kept me from getting injured doing the heavy lifting of gardening,” Easton offers. But in the next breath she tears slightly as she speaks of how the “heart centered alignment” of Anusara yoga, in which she has found her spiritual home, countered the cold, alcoholic and anti-religious dynamics of her childhood in Seattle. In her early career years as a librarian, Easton—having been raised by a mom, who had become an avowed atheist in the very Catholic climate of Yakima, and a dad, who abandoned Christian Science when he became an adult—recognized there was a whole cultural discourse she didn’t know, that of the religions. She studied to fill up the hole, finding herself “drawn to the physicality of Hinduism and Buddhism,” where philosophy meets up with the body.

Yoga, see-sawing between effort and ease, between the creation of a pose and its intentional dissolution, is, Easton asserts, about learning to channel vital life forces through the body.  It releases psychic creativity by unlocking the fascia of the body, the place where we store bad habits, tension, grudges and old hurts. By planting the feet, then the hips, and by breathing through the midline of the body, one returns to the primary vibration or “heartbeat” of the universe. In that way, yoga helps people open towards “the practice of experiencing their own aliveness, of learning what they can and cannot control” in the physics of daily life. Gardens can likewise be seen as a practice of opening out the creative physics of plants—learning how plants conspire together, creating sanctuary there not only for humans, but for bees and birds. (Easton gardened organically before magazines even allowed her to use the word “organic.”)

Anusara yoga, a branch of Hatha yoga, is about alignment and flow, yet is practiced by holding bodies with a loving gaze. In this tradition, one looks for the beauty and appreciates the perfection of the other. Some traditions of yoga, like Iyengar, focus intensely on technical precision, and sometimes one’s life may call for that, Easton noted. As Easton’s first teacher, Maurice Svoboda, told her, “Freedom comes through discipline.”  If that initially rang true for this child raised in a chaotic household, Easton, after her twenties, came to a point of disenchantment with the strictness of the Iyengar method.

In the yoga studio, Easton’s voice—a combination of calm directness and joy—coaxes bodies towards their best. “Expand and soften,” she invites, her voice carrying a lilt that these bodies now obviously trust. “Relax your jaw, drop your shoulders,” she continues, and the flesh of bodies visibly unlocks. “Consider how if you lift your chin, your heart opens and receives.”

Walking among the bodies now moving into a pose called “the cat cow,” Easton—with the gentlest touch of the fingertips—invites a muscle here or the locked fascia there to release. “Perfect, yes,” she comments. “Isn’t that nice?” she sings to another body. “We’re admiring your spine,” she adds, instructing others by inviting their gaze. “Bend more deeply. Yes, exactly. Beautiful.”  Over and again, the class hears Easton praise their beauty. And yet, Easton’s studio instruction is also an invitation to “do what is a challenge.”  Consequently, bodies are coaxed into the balance pose of “baby dancer”—posed like the heavy headed blooms of angelica tested by the winds.

Easton’s practice tends the singularity of each body—its historied flesh, its particular limits. Many days, she observes, it’s simply enough to show up for class, to move and breathe. “The longer I teach,” she reckons, “the less I presume to know what is good for each and every body.”  Each body has its own limitations, and those are different each day, each practice. Treating those limits with respect (sometimes flushing those muscular knots with breath, sometimes honoring “the good enough”) is also part of the physics of yoga. Easton is not seeking perfection. Or rather, “perfection” in this practice of yoga is viewed through an entirely different lens than symmetry and athletic precision. Perfection is about learning to live with and through what presents itself.

Intriguingly, her floral bouquets—which she admits are what whet her palate for gardening and what determines her choice of plants—sport a similar naturalistic beauty. These involve no floral tape, no wire. The challenge is “translating the field of the plant inside—not overcoming it,” she observes. Floral bouquets, Easton insists, are best conceived as appreciating the nature of nature—whether the essence of sweet pea or hydrangea, rather than bending them to our will. Beauty–sri in Sanskrit—is a word of applause that welcomes the truths of flesh and soil, the ephemeral nature of a bloom, while also gently inviting creative transformation or “opening,” as one works and reworks a bouquet, a garden, a body.

The loving gaze of Anusara benefits the flesh of each student differently. “It keeps my anxiety at bay,” one student offers.  “It heals my body,” adds Kelly, who suffered vertigo and who, following surgery, has found this the only path of recovery. Dave mentions that he takes yoga for its dynamic counterpoint to the pounding of harder sports. Stella, observing that she, like Easton, reads the philosophy of yoga and practices in order to somatically ground her aspiration towards non-judgment.

Half-Moon studio, like Easton’s backyard garden, is a sanctuary—a place of rest, a place with just enough of a privacy shield coupled with a loving gaze so that bodies relax. As students rest into their own weight and catch earth’s dynamic energies, the heart—that center of desire and conspiratorial joy, of compassion and empathy—can finally open.

That the restorative poses—like savasana or “corpse pose”—are often the hardest for her students may say something about them, but just as much about our culture. In the corpse pose, which concludes every practice, one lies back on the floor, arms and legs slightly spread; one’s weight is invited to drop heavily into the floor.  You could call it rest, repose, stillness. But most of us trying to perfect the pose ask ironically and repeatedly, “What muscles are involved?  How do I do it?”

This teacher with a gentle laugh replies, “You are not ‘doing’ anything.”  Attracted to perfecting technique, we know little about “dissolution,” about release, about opening the heart, that softening of our presence to the other. In the garden, we, determined to pull the last weed, often comparably know little about sitting and enjoying the sun in the garden. “A garden is successful,” Easton sagely observes, “when the gardener loves it, when the gardener takes pleasure in it, reposefully and in the heart.”

If Easton were to write another book, it would be about “healing gardens”—gardens in which the focus on the organic principals she has employed throughout her years as a horticulturalist expands upon this aspect of sanctuary. Gardens can be a sanctuary for the bees lolling in the blooms. A sanctuary where bird song mixed with the joyful buzz of insects becomes as moving as Pachelbel’s Canon in D. A sanctuary filled with fragrance and profuse with the herbs one makes into green sauces. A sanctuary, like Half-Moon Studio, where we can finally allow ourselves the great reveal, the opening of the heart.

Easton in her Langley Garden (photo by Susan Scott)

Photo at the top: Val Easton (photo by Susan Scott)