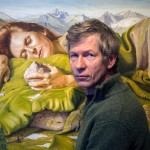 Making a Living While Living for Art

Artist Rob Schouten’s life has been one of recognizing and perfecting his own gifts while appreciating and celebrating the gifts of others.

“I always liked to draw,” said Schouten, who was born and raised in Rotterdam, Holland. “My dad was an architectural draftsman so he always came home with old blueprints I used to draw on.”

After attending traditional Dutch public schools, vocational testing channeled Schouten to a graphic arts school that he attended four years, earning the equivalent of a Master’s in graphic design.

“The Irresistible Regeneration of Peace” by Rob Schouten. (photo courtesy of the artist)

“I worked in a printing office, an ad agency, and a graphic supply company,” said Schouten. “None of these jobs encouraged me to be innovative. Instead I learned how thought-out and manipulative everything is in advertising.”

Even at age 22, Schouten knew he needed his spiritual values to integrate with his work.

“I felt at odds with my conscience using my artistic talents to sell more cars and appliances,” said Schouten. “I got depressed, then I decided to quit my job and travel to America on my savings.” He’d visited the U.S. prior to coming here in the fall of 1979, and he had friends in the Washington, D.C. area.

“They introduced me to some other friends and I hitched a ride with the new friends to Seattle,” he said. “I liked Seattle, and I wanted to explore it more, so I stayed.”

In Seattle, Schouten met other artists who sold their work from the day stalls at Pike Place Market. He first got a job selling someone else’s pottery at the Market, then decided to try selling prints of his own black and white drawings.

“That’s when I started to take the drawing more seriously,” he said. Schouten has long had an interest in surrealism. At the age of 13, he attended an exhibition of Salvador Dali’s works in Rotterdam. “I was simply blown away by one piece after another,” he said. “And then I saw Magritte’s work at another exhibition.”

Books discovered in Seattle’s Shorey’s Bookstore furthered his interest in symbolism, Eastern mysticism, quantum physics and Jungian psychology. “Books like ‘The Dancing Wu Li Masters’ by Gary Zukav and ‘The Tao of Physics’ by Fritjoff Capra opened up my visual imagination of how these ideas could be expressed in images,” said Schouten. “Once I let the concept sink in that we’re all interacting waves and particles I was awed by the sacred miracle of it all.”

Schouten spent three years at Pike Place Market selling his work, until he realized it was time for a change. “I understood that what I wanted to paint and what would sell at the Market were opposites,” he said.

During his “apprenticeship” at the Market, he learned to mat and frame his work. Schouten had about a dozen images made into limited edition prints. He also started doing watercolors and learned the importance of using archival papers and pigments with the highest degree of light fastness.

“Shadow Passage,” by Rob Schouten. (photo courtesy of the artist)

Two events changed his life course in 1983. “I started a gallery in Pioneer Square with a partner, Carolyn Harkness, and I moved to Whidbey Island,” he said. “I fell in love with Whidbey the first time I came here.”

Working in the gallery three days a week and roughing it on Whidbey Island in a cabin on East Harbor Road gave him added skills that would serve him well later.  “I kept painting and approaching other galleries. I was accepted at the Kirsten Gallery in Seattle and into the Marine Art show at a La Conner Gallery in 1983,” he said.

In 1987, he met poet Victory Searle and they married in 1988. By then, Schouten was firmly a Whidbey Island resident, though he still visited the Seattle art scene frequently.

In 1989 he began collaborating with a group of other artists who called themselves “The Dharmic Engineers.”

“They were all friends from Market days,” said Schouten. “We rented a studio in Pioneer Square and started doing group shows and collaborative installations in nature á la Andy Goldsworthy, though none of us had ever heard of him then,” he said. The Dharmic Engineers did an installation called “The Seven Doors” at Westlake Center, with each freestanding door representing one of the seven chakras. A documentary film was made about the installation.

Schouten is proud to display the work of other fine artists in the Rob Schouten Gallery. Here he stands by a display of glass art by Rob Adamson and Janis Swalwell. (Photo by David Welton)

And Schouten kept painting and learning his craft through trial and error.

He and Victory launched a company called Great Path Publishing to sell his paintings in card form. Eventually, they also imported cards made from other artists’ images and sold most of their stock in New Age bookstores. He also did the paintings for “The Power Deck” of tarot cards.

“Things always have a way of working out,” said Schouten of his efforts to reconcile his life’s work as an artist with the work of making a living. “A painting will sell or something else will happen.

Schouten moved his studio to Greenbank Farm in 2003 and he and Victory bought a home in Freeland that same year. While working at the Farm he noticed one of the business spaces sat empty for a time, and eventually asked Farm management about renting it for a gallery. In May 2008, the Rob Schouten Gallery opened its doors.

“It felt like the right thing to do,” said Schouten. The couple started with just his work in the gallery but, by the second year, they’d expanded to include the work of other talented local artists. Today, the gallery showcases the work of several painters, printmakers, sculptors, glass and textile artists and jewelry makers.

“I realized that having the gallery means I don’t have to make a living anymore just selling my own work,” he said.

Today, when Schouten goes to his studio, he concentrates on large, labor-intensive projects such as “Earth,” a luminous, dreamlike oil painting that is one of a series depicting the basic elements of earth, fire, water, space and air.

“I spent about 600 hours on ‘Earth’,” he said. “First I did the drawing using a model [local actress Amy Walker], then I transferred the drawing to a canvas that I’d sanded and primed to make it smooth. Then I under-painted the whole thing with umber, which adds complexity to the colors when they’re applied later. Finally I applied the oils.”

“Earth,” by Rob Schouten. (photo courtesy of the artist)

The finished product shimmers with depth and meaning. Schouten’s later works show his talent for capturing meticulous details and his patience with the artistic process.

Studio time is also meditation time when he recharges his creative batteries.

“If I’m not in the studio, I get off-center,” said Schouten. “Quiet time in the studio allows me to empty my mind and just create.”

Rob Schouten is one of the featured artists in this month’s WLM Virtual Gallery.

Schouten describes this mixed media piece as “a work in progress” in his studio at Greenbank Farm. Working titles include “Cauldron” or “Moon Temple.” (Photo by David Welton)

Image at the top: This recent painting, entitled “Earth,” took Schouten over 600 hours to complete. (photo by David Welton).

Betty Freeman is familiar with the challenge of making a living through art. She lives in Clinton with her husband Dan, a sculptor, who also shows at the Rob Schouten Gallery.