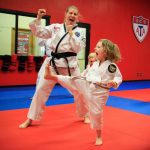 Making Leaders One Black Belt at a Time

Many people who live on Whidbey Island claim that the island is a calling, saying that they didn’t choose to come here; instead, the island called them home. Whidbey resident Robert G. Armstrong Jr. was called twice. The retired Marine gunnery sergeant, combat veteran, former firefighter, and martial arts instructor says, “I didn’t choose taekwondo, it chose me.”

Armstrong holds a book that’s part of a character-development program for 3- to 6-year-olds. Each level is designed to build character qualities such as courtesy, respect, and discipline, and also to develop motor skills and enhance the ability to pay attention and follow directions. (Photo by David Welton)

As a child, Armstrong gathered cast-off items during Spring Clean Day in Tivoli, New York, and cobbled them together so he could use or sell them. One day, amid all the junk, he found a book with a man’s face on the cover. He doesn’t remember the title of the book. “Something about Kung-fu, or Shaolin,” he says. But in between typical boyhood chores, school, baseball, and other interests and responsibilities, he devoted hours to practicing the martial art it described in its pages.

One December day in late 1984, his dad said, “Get in the truck.” In their household, talking back wasn’t encouraged, so he simply complied, without asking where they were going. A silent 15-minute drive ended at Klee’s Taekwondo, on Rural Route 9 in Red Hook. Armstrong’s heart sank. He didn’t want to learn taekwondo, an ancient martial art of unified Korea. He wanted to be like Bruce Lee and learn Kung fu.

In sparring stance are Karissa Napoli and Gavin Baker. The adults behind them (from left) are Trevor Fleming, Jennifer Cisney, and Stephanie Chia. (Photo by David Welton)

But one used uniform, a white belt, and a pair of white sweat pants later, he was hooked. Yet, another challenge loomed.

Karissa Napoli and Grady Armstrong work on combinations on the bag. (Photo by David Welton)

Armstrong devoted the next 15 years to practicing, competing in, and teaching taekwondo at Klee’s. “I was completely loyal to the cause of taekwondo because I saw what it did to me, the setting of goals, and the Yes-I-Can attitude,” he says.

Then came the Marine Corps. He was able to put the lessons he learned in taekwondo to use immediately. The vision and discipline he developed through the martial arts gave him the perseverance he needed to be a Marine.

Armstrong was told that the day he became a United States Marine would be the proudest day of his life, but it didn’t compare to the day he earned his black belt. He devoted twenty years to the Corps, and before he retired as a Marine gunnery sergeant, he had 250 people reporting to him. The pride he felt the day he retired finally did supersede his pride in having achieved a black belt.

After he retired, Armstrong found himself with no one to lead. He kept asking himself “Where are my marines?” He worked in a juvenile center for a while, telling the kids there what he could. He coached baseball, attempting to teach the kids what he knew. He became a firefighter, looking for those he could lead. Eventually, he knew he had no choice but to do what had to be done. He had to open his own school and make “Armstrong’s Taekwondo,” a return address he used in correspondence as a young student, a reality.

The school took shape in 2014 when Armstrong and his wife Tara finally opened the doors to Armstrong’s Taekwondo at Ken’s Korner in Clinton. In 2017, they opened a branch in Oak Harbor.

Watching from the back of a class reveals the influence that the Armstrongs have on their students. On the backs of uniforms worn by children, teens, and adults are the words, “State Champion,” “District Champion,” and “Regional Champion.” Those words belong to people with goals, people with perseverance.

Along with the skills required to earn such achievements come the lessons that Armstrong learned along his path, what he would call a “black belt attitude.” Those lessons include confidence, the Yes-I-can attitude of self-esteem, perseverance, integrity, communication, honor, goals, and of course, leadership.

“The brain is the weakest muscle,” Armstrong says. “If you let your brain rule your heart, you’ve lost the battle of life. If you have heart, the sky’s the limit. You have a journey that means much more to you than learning to defend yourself. Here we say, ‘Make it a way of life.’”

In the end, Armstrong would experience pride even greater than what he felt the day he retired from the Marines, and that was the day he tied the first earned belt on to a student at his new school. All those years of dedication to serving, to educating others, to leading, to learning the emotional, intellectual, and bigger-than-self lessons that formed his early years in Tivoli, and years in the Marine Corps, now came together for him. “I knew when I tied that first belt on that I could impact the community, making leaders of the young men and women, the adults that come through here. One black belt at a time.”

Leckey Harrison is a resilience trainer with Raise Your Resilience, LLC, resident of an intentional community, retired firefighter/EMT, and a current student of krav maga, an Israeli military self-defense practice. He lives in Langley.