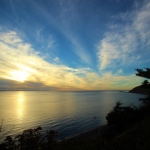 Whidbey Island has such beautiful scenery that sometimes it’s easy to miss the small details; to forget to look closer in than the vast expanse of mountains and water. 2014 has been full of interesting colors and sensual discoveries that continue to unfold and 2015 only promises to be better yet. These are photos taken throughout the year, some were part of features written for Whidbey Life Magazine in 2014 and links to the original stories are below the photo.

There’s always something new to see on Whidbey Island even if it may be the same scene in different light. This shot is from the top of Hill Road looking towards Ebey’s Bluff.

Even if the day is drippy there is some small jewel to be found. These berries seem to glow from within at the Cultus Bay Nursery. Read more about the Cultus Bay Nursery in this story by Dianna MacLeod with more photos by Martha McCartney, “Beguiling Seasonal Secrets at Whidbey’s Horticultural Heaven this Weekend.”

On a dash into the Greenbank Store I stopped for a while to watch a nest filled past over-flowing. The nest was built just over the window and above a strand of lights but this apparently was no bother.

A very cozy lodge atmosphere seems to whisper tales of long winter’s nights of darts and ale by the fire at the Captain Whidbey Inn in Coupeville. Read more about the Inn in Dianna MacLeod’s story with more photos by Martha McCartney, “Location, Location, Location.”

Tom Lindsay creates a giant bubble tube at the boat launch in Coupeville with the pier in the background.  Read more about Tom in Martha McCartney’s story, “From Leprechauns to Soap Bubbles: I Reckon a Fella Could Do That.”

During my afternoon with Tom Lindsay I was able to capture this self portrait with the bubble artist and myself standing on the boat launch in Coupeville.

Whidbey Island is filled with interesting sights, not all are what everyone would consider scenic, however I love a good rusted vehicle tucked into the landscape.

This young buck blacktail deer, here still in velvet, is one of a pair of twins that frequents my yard.

There was an amazing variety of work in the studio of bronze sculptor Jeff Day days before his exhibit at the Brackenwood Gallery in Langley. Read more about Jeff in this story by Martha McCartney, “Oh Happy Day: The Sculptor Speaks.”

Siri Bardarson joins her twin sister Karin Blaine for a duet at Tres Gringos in Langley. Read more about Siri Bardarson in this story by Russell Clepper, “Artist Renews her Muse in Distant Lands, Comes Home to Play.” You can read Siri’s blog here.

Beautiful poppies bloom during the summer at the Lavender Wind Farm.

The day I spent talking with Buffy Cribbs the tent caterpillars were rampant and covered her assemblage sculpture. It made for a very creepy shot but added some movement! Read more about Buffy in this story by Martha McCartney, “The Art of Buffy Cribbs: Painting Backward, Thinking Forward.”

The Northwest Language Academy’s event China Pearls was like watching fireworks in slow motion. Read more about the NWLA in this feature by Martha McCartney, “On the Silk Road to Langley.”

While doing a little exploring this spring, I happened upon this stunning scene in Clinton.

On another photo shooting foray I stopped to investigate some pigs on Penn Cove. This photo tells quite a story. I did not stop there for long.

I was delighted to recognize what I had considered to be an east coast wildflower, the white trillium, while on a trail near Maxwelton.