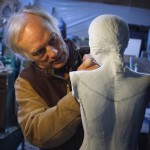 While Whannell is known on South Whidbey for his stone sculptures, he’s also a licensed and bonded general contractor who can work with designers, builders and homeowners to create stone countertops, indoor and outdoor tables, sinks, memorials and water features. “I even made a stone bookcase for my daughter Amata once,” he said. “It’s always good to explore something new.”

“The process of stone choice, design, fabrication, installation, and pushing the boundaries of stone’s place in a home or garden are the exciting elements that keep my creativity alive,” writes Whannell on his website.

About 18 months ago, Whannell injured his shoulder and, while it healed, needed to find an artistic medium that was less physically demanding than sculpting hard stone. “Glass casting grew out of that need,” said Whannell. “Using lighter materials like glass and wood also make for ease of display in galleries.”

“Stone sculpting is heavy, hard work. Anything you have to take a hammer and chisel to requires hard work,” Whannell said.

He is also resourceful, and began making smaller pieces to use up offcut stone he had on hand from other projects.

In the past year and a half, Whannell has created an evolving series of figures featuring human heads atop slender columns. Most of the heads are hairless, non gender-specific, with closed eyes. There is a quiet serenity to these figures and the theme of silence ties the series together.

“My effort in this series is to create a simple, slightly abstracted form with a certain meditative feeling of peacefulness and serenity, yet fully awake and aware. It began with a slim six foot tall piece of Cambrian Black granite left over from a powder room vanity sink, which became a tall slender figure called ‘Our Lady of the Garden.’ Each new figure is a progression of the one before,” said Whannell.

Whannell with one of his figurative sculptures from the “Silent” series. The head was chiseled and the pedestal cut with his giant saw. (Photo by David Welton).

Series I is titled “Silent Watchers;” the pieces were started in stone, then evolved to include bronze castings as well. Series II is called “Silent Words,” and the title came from a poem Whannell wrote:

Spoken to the night sky

Reflected by the stars

And heard in the hearts

Of those with silent minds

“I love it out here,” he said of his home on Whidbey Island. He and his wife of 40 years, Clarie, built a home on Scatchet Head in 1991 on a lot his parents had owned since 1964. “There’s a reality difference on South Whidbey. My wife says there’s more room for the molecules here,” he said.

Sculptor Lloyd Whannell applies patina to a bronze, then washes off the chemicals. (Photo by David Welton).

Having lived on Lopez Island for several years, Whannell was no stranger to island life when he moved here. “There’s the same feeling of community here as on Lopez,” he said. “But Whidbey is more accessible to the city when you need it.”

Whannell commuted for a few years to construction jobs in Seattle until he was able to open his stone-working business in Freeland. He now shares his 5,000 square foot workspace with 10 other artists in a large warehouse on Roberta Avenue in Freeland.  “The countertop business built up slowly, and now is starting to pick up again after a few slow years,” said Whannell. “That’s what pays the bills so I can make art.”

His affinity for stonework of all kinds remains, even with adjustments he’s made over the years. When he began sculpting, he actually started with clay and experimented with making the clay look like stone. “Then I decided to just use stone,” he said.

Whannell said his figurative work is informed by the need to capture inner peace, tranquility and serenity. “The slowness of stone sculpting is very meditative for me,” said Whannell. “I can lose all track of time when I’m working with stone.”

Experience Whannell’s meditative stone sculptures and wall art at the Rob Schouten Gallery at Greenbank Farm and at Museo and Brackenwood Gallery in Langley.

Whannell and his helper Justin Haffner set up a 400-500 lb. slab of granite on the giant saw. The saw has tubes to water the slab, cool it and wash away the residue. (Photo by David Welton).

Lloyd Whannell is one of the artists currently featured in Whidbey Life’s Magazine’s Virtual Gallery.

See more of Lloyd’s work on his website: www.fineartbuilders.com

Photo at top: Whannell uses the rasp file on a torso. (Photo by David Welton for WLM)

Betty Freeman is an award-winning freelance writer and editor who lives in Clinton with her husband Dan, a sculptor.