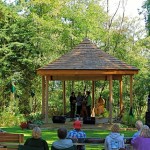 Color the grass blue and the rhododendrons every hue, during peak bloom time.

For rhododendron enthusiasts, that second colorful event won’t happen until next spring. Bluegrass fans, however, have only to wait until this Saturday, Aug. 10 to offer themselves a generous earful of that high, lonesome sound among the 43 acres of woodland gardens here on Whidbey Island.

The Meerkerk Bluegrass in the Gardens fundraiser is rolling around for its seventh year. The event belongs to one of a myriad of efforts required to fund the operation of one of Whidbey Island’s flagship attractions, the Meerkerk Gardens. This year’s offering comprises three bands and, for the first time, a bluegrass guitar workshop.

Performers at a past Bluegrass Festival at Meerkerk Gardens. (Photo courtesy of Meerkerk)

As in past years, the performances will take place at the Bob Boehm Gazebo in the Emily Watson Hybridizer’s Garden and Presentation Grounds. Admission is $15 and is free for children 15 and younger. The event begins with the workshop at 11 a.m. at a site across the road from main stage.

Guitarist and teacher Quinn Fitzpatrck will share his expertise with anyone interested in learning some of the basics of bluegrass guitar picking. Fitzpatrick teaches guitar here on Whidbey Island and is also well-known locally for his finger style picking.

Local bluegrass group Bayview Sound will kick off the music at noon. The band’s leader, Lynn Cantwell, will also emcee the event. Cantwell has a long history as a bluegrass musician including a stint with a semi-professional group from California, the Mill Creek Boys. His wife, Debbie, along with vocalist Teresa Mooney and upright bassist Richard Hughes, round out the band’s line-up.

“These bluegrass festivals [at Meerkerk] have been great,” event organizer Kevin Lee said.

“There are a lot of ‘quiet’ pickers here on the island that local people don’t know about. We get calls from bluegrass musicians on the mainland, who say they want to come out because they are in a bluegrass band and one of their members lives on Whidbey.”

Lee said the this year’s event will also feature Click Music as a vendor. There will be a food court and non-alcoholic beverage station, as well.  In addition, people may bring their own beverage of choice and a picnic if they would like. Lee encourages attendees to bring a chair and a musical instrument.

“There has been a little tailgate picking going on afterwards in past festivals,” he said.

Meerkerk Gardens Operations Manager Joan Bell said the nursery will be open during the afternoon for anyone interested in browsing through or purchasing anything from their collection of hybrid, species and heritage pre-potted rhodie plants.

Children will also find plenty of things to do and places to explore. The concert area is a beautiful park-like grassy glade, dotted and bordered by large conifers and other trees. Bell said children particularly love to play in and explore the “secret garden” area, laced with trails that open suddenly into hidden enclaves and secluded gardens. Bell said she expects more than 300 people to show up to enjoy the afternoon’s performances.

Russell Clepper is a singer songwriter who plies his trade locally and around the country. He also is a substitute teacher for the Oak Harbor School District.

Check out these links for more information: