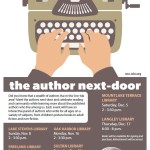 Meet the ‘Author Next Door’ at Freeland and Oak Harbor Libraries on Nov. 14 and 16

It is likely that one of your neighbors is an author. During the dark days of November, why not step out and head to your local library to learn who that author may be.

Sno-Isle Libraries’ “Author Next Door” series features 35 authors who will speak at five libraries on Whidbey Island and Snohomish County throughout the month.

Lorraine Healy, poet and photographer, will speak at the Freeland Library on Saturday, Nov. 14. (photo courtesy of Lorraine Healy)

Lorraine Healy has read her poetry to packed venues. A Buenos Aires, Argentina native, Healy moved to Whidbey Island in 1996 and began publishing her poetry in 1998. Working on her third book of poetry, Healy published an e-book this year on how to use “Holga” cameras to take creative photos. Titled “Tricks with a Plastic Wonder,” Healy writes clearly on how to have fun with this toy camera.

An alumni of the Author Next Door series, Healy said, “It’s an opportunity for the public to get to know writers who are your neighbors. It’s fun to go to, even if you don’t know the author.”

Maybe you live nearby Andrea Hurst who, besides being an author, is also a literary agent with a dachshund who writes novels in the Madrona Island Series.

Did you know that your neighbor Sean Keeley, a Syracuse, NY sports fan, wrote the novel “This One’s for all the Sausage”? Keeley also writes a popular blog called “Troy Nunes is an Absolute Magician.”

Meet Gina Marie Mammano, who has written four books on spirituality, including “Bones of Lace, Sockets of Sorrow: Meditations on Jesus, the WordPoet.”

And Thomas Trimbath says that he began writing at first to lose weight and now has nine books offered on Amazon, including “Dream. Invest. Live: Pioneer the Investment Frontier So You Can Live Your Dream.”

Judith Works once worked for the United Nations in Rome as a legal consultant. She has written about life as an expatriate in her e-book: “Coins In The Fountain.”

Two days later, on Monday, Nov. 16, Oak Harbor Library will host its program from 2 to 3:30 p.m. Eight authors are scheduled for that day.

Donna Hood, humorous writer and author of “FUN-erals” will speak at the Oak Harbor Library on Monday, Nov. 16 (photo courtesy of Donna Hood)

This is Donna Hood’s first time joining the artists’ panel. “I’m so excited that Sno-Isle Libraries hosts the local writers and gives us a chance to talk,” she said. Hood was impressed by how organized the library is in its interview process. Hood wrote a romance novel when she was in eighth grade, even though she didn’t know what romance was then. She has worked as a newspaper reporter and an English teacher, among other careers.

After moving to Whidbey Island from Texas, Hood wrote a series of humor columns called “A Texan Looks at Whidbey.” Inspired by Atul Gawande’s book “Being Mortal,” Hood wrote a booklet on death’s inevitability and the need to prepare for it. It is called “FUN-erals.” She uses this book to teach a class on personal obituaries.

Also, plan to meet and talk with children’s book author Deb Lund, who has written eight books, including “Dinosauring.”

J. Booth, a former broadcaster, wrote the crime series novel: “Olive Park,” his first in a series about cold case investigations in Sacramento.

And then there’s the mysterious Art B. who will tell you, in person, about his writings.

You’ll also meet marine naturalist Sandra Pollard who has written of the decimation of our local orca whale population, due to commercial capture between 1964 and 1976. Pollard traces the destiny of many of these whales—separated from their families and sold to marine parks—in the book “Puget Sound Whales for Sale: The Fight to End Orca Hunting.”

Kate Poss works as a library assistant at the Langley Library. She worked for three summers as a chef aboard a small Alaskan tour boat. She was a newspaper reporter in Los Angeles for many years before moving to Whidbey Island where she likes ‘talking story’ best of all.