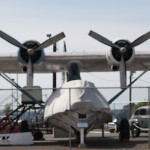 A plane rests on Pioneer Way, waiting to be made whole again. Early this fall, the wings will be attached to the plane, known as a PBY, an aircraft that holds many memories for those who flew in it during World War II. Cross the street and step into the museum, a place that will take you back in history—not only of the history of the beloved plane and sprawling base—but of Oak Harbor and Whidbey Island.

“We try to tell the story of our little town,” said Wil Shellenberger, president of the PBY Museum Memorial Foundation. Formed in 1998 to preserve the history of naval aviation on Whidbey Island, the Foundation garnered the support of several of the original Oak Harbor families, who donated funds and artifacts.

“We’re often asked how little Oak Harbor became the Naval base that it is today, and the museum tries to tell that story, including the dedication, the work and the commitment,” said Shellenberger. “But it also tells the story of Oak Harbor and the history of the Seaplane Base and Ault Field, a base that was built in 1943.”

In the entry, a visual history of Oak Harbor

During World War II, the Seaplane Base was closely tied with Seattle’s Sand Point as a place to refuel, to arm and set up planes so they could cover longer distances over the water. Although construction of the base was started before Pearl Harbor, it accelerated once the war began.

A history timeline stretches through the museum. As you enter, you can read the story of Oak Harbor in the early days, presented in newspaper clippings and photos. Many of the local residents were involved in overseas missions, and many of their families still live on Whidbey.

Different time periods within the museum

The PBY, an amphibious plane—and the focus of the museum—was designed to be a patrol bomber, a plane to attack enemy transport ships and disrupt enemy supply lines. But this “flying boat” proved to be more valuable in search and rescue, saving the lives of thousands of airmen shot down and stranded at sea. While several versions of the flying boats were employed by the Navy, the PBY was the most widely used and manufactured.

Charles Aus, an Oak Harbor resident and former radioman on the PBY plane, has vivid memories even after 60 years. “The PBY was a very stable plane,” he recalls. He also served as a tail gunner, manning the gun that dropped from the center of the plane. That stint of flying confirmed his desire to become an aviator, and he ultimately became a Navy pilot who traveled the world.

The museum is designed to include science, technology, engineering, and mathematics, fulfilling STEM educational requirements. Interactive displays appeal to everyone, including children; exhibits and story boards highlight local history makers. A gun turret—with room to put your shoulders inside—helps us understand how Aus might have felt as he took his place as a gunner.

Tail of a Super Constellation from 1960s

Visitors can see a maintenance shop and a cutaway of a PBY engine. Beaching gear, wheels on axles, and tail hooks tell more of the story. Two flight simulators reveal just how skilled the pilots had to be to fly in adverse conditions. Under construction is a “Night Vision Goggle” room, where you can try goggles on to experience the way darkness limits a pilot’s view. Included is a display of the Aleutian Islands, one of the places where planes were lost to weather more frequently than to battle.

Destroyers played a large part in the war, a role that Shellenberger knows firsthand, being a “blackshoe,” watching for subs and rescuing downed flyers. Chaplains always travelled with the crews, as did corpsmen and firefighters.

On display are pictures of the Salisbury Sound, a ship stationed at Whidbey Island for two years. Visitors can progress through the history of US wars fought in Korea, Vietnam, Afghanistan. One exhibit includes a tail fin from a Russian Mig brought back from the Afghan war by the VAQ-142 Gray Wolves; complete with signatures from the team, it occupies a place of honor.

Plans for the museum include expansion and the addition of a hangar to house the PBY plane and protect it from the elements.

“There’s a rich history of aviation, and we’d like to keep it all together on Whidbey Island before it flies away,” said Shellenberger.

Deb Crager is originally from the Midwest but has lived on the island for 24 years. She wrote the book “101 Things to do on Whidbey Island: for a Day, a Weekend, or a Lifetime” available on iPad and Kindle Fire.